Happy Tuesday! Today is the publication day on the third and final part of Ex-Con by Katana Collins. I absolutely loved this book and I highly recommend it! Each part is now available at $1.99 each (which means the full-length novel is only $5.97). Don't miss out!

My review of Ex-Con

Ex-convict Shane McGill is as rugged and wild as they come. Bad to the bone and back on the streets, he’ll do anything and say anything to survive. Even if that something means joining the one car club he had worked so hard to avoid. But there’s one person out there who can match him toe-to- toe...the hot mechanic pin-up doll of a woman with the body of a goddess and tomboy attitude would even give him a chance.

KATANA COLLINS is lucky enough to love her day job almost as much as she loves writing. She splits her time evenly between photographing boudoir and newborn portraits and writing steamy romances in a variety of genres -- paranormal, contemporary, new adult and suspense.

She bounces between living in New York and Portland, Maine, with an ever-growing brood of rescue animals: a kind of mean cat, a very mellow chihuahua, and a very not mellow lab puppy... oh yeah, there's a husband somewhere in that mix, too. She can usually be found hunched over her laptop in a cafe, guzzling gallons of coffee, and wearing fabulous (albeit sometimes impractical) shoes.

“I was thinking, maybe I should take Eve elsewhere—”

Her gaze jerked to his, her blue-green eyes flashing like a bolt of lightning against a rough ocean. “Why?”

Because you make me so hard, I’m worried my dick will get caught under the hood, Shane thought sarcastically. “Just seems like you got a good thing here. I’d hate to screw it up.”

On the outside, there was a quiet calm to her, but he could see the storm below the surface. She was just more controlled than the average person. The hollows of her cheeks were gaunt as though she were sucking them in in anger. “If I was a man, you wouldn’t be saying tha—”

Shane stepped forward, his actions interrupting her before his words could. He dropped his hand gently to her hip, the dampness of his own palm cool against her skin. “If you were a man, I wouldn’t want to bend you over that Audi right now.”

She swallowed and the delicate movement rolled down her svelte throat. “If our positions were reversed . . . if you were a man who owned a garage and I was working for you, would you feel the same reservations?”

He thought about that for a moment. “I would. But most men wouldn’t.” With the back of his knuckle, he brushed the underside of her cheekbone where she was chewing the inside of her cheek. It was pure instinct, to touch her where he saw tension. And yet he hadn’t expected the little gasp that came from those gorgeous lips at his touch. He hadn’t anticipated the way her breasts would hitch with a sharp breath. And he really hadn’t counted on how good her face would feel beneath his touch; like silk. Comforting, soft, and sexy as all hell.

They stayed like that for a long second until Shane’s thumb stroked, finding the underside to her jaw. If there was any question of whether or not she felt the same desire as he did, he could certainly feel it with her quickening pulse that pounded against his thumb. What in the hell am I doing? Shane thought as he dropped his hand to his side. This was the exact shit he was trying to avoid. This was why he needed to get away from Charlie Wakeman.

Charlie looked disoriented for only a moment before she collected herself, grabbing a clipboard off the table and handing Shane the sheet of paper from the top. “I had a good feeling about you after last night, so I ordered your parts this morning. If you want to use your earnings for today to pay a tow truck to take Eve to another garage, it’s your choice. I’m sure the garage would buy the parts off of me. I’m gonna be here late working on my Hornet after hours if you decide to send someone tonight.” She scribbled a number down on a check and tore it off, handing it to Shane. “Sorry, don’t know your last name. I figure you can fill out the ‘pay to’ section yourself. But if you decide to come in tomorrow, I’m here Mondays through Saturdays at seven. And I’m happy to keep our deal.”

He took the check, folding and tucking it into his wallet. “McGill. My last name’s McGill,” he murmured.

She nodded, flicking a glance at the bulge between his legs. Thank God for loose-fitting pants and good boxer briefs. But even still, Shane wasn’t a small guy and he was pretty certain that his arousal wasn’t easy to hide. “Well, Shane McGill. It was nice meeting you. But for the record? I’m pretty sure we could fuck and still come to work in the morning like adults.”

His muscles twitched to step closer. To pull her against his body. One fuck would be great. One night with no attachments and nothing more to it. But it wasn’t realistic. He was already drawn to her. And one night would never be enough. The last thing he needed was more of a reason to stay in Boston longer than he had to for his parole. “It’s nice to think that’d be true. But something tells me one taste wouldn’t be enough, Red. And I think you know that too.” He saw her mouth opening with a retort, but before she could speak he turned and walked out of the garage. 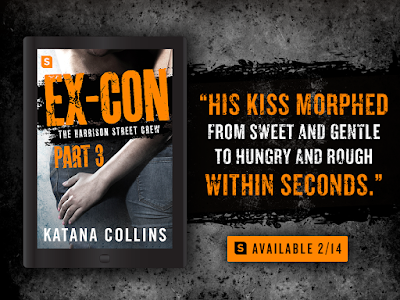