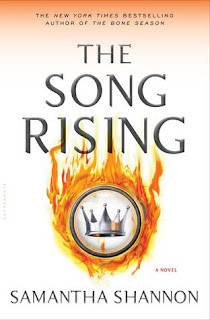 Following a bloody battle against foes on every side, Paige Mahoney has risen to the dangerous position of Underqueen, ruling over London's criminal population.

But, having turned her back on Jaxon Hall and with vengeful enemies still at large, the task of stabilising the fractured underworld has never seemed so challenging.

Little does Paige know that her reign may be cut short by the introduction of Senshield, a deadly technology that spells doom for the clairvoyant community and the world as they know it…

It's been quite a long time since I read (and enjoyed) The Mime Order, and even longer since I read The Bone Season. But this is a series that sticks with you, even if it's just the major events. It didn't take me long to get back into London 2059, where Paige Mahoney has taken the deadly position of Underqueen. Overall I think I enjoyed this third novel. It'll be interesting to see how Shannon makes this a seven-book series.

In this book, Paige has assumed the role of Underqueen, with Jaxon Hall's shocking betrayal. Many voyants are not happy with her or her assent to power, and she has many more enemies than she ever has. But an entirely different problem has risen - the creation of the Senshield, a technology that has incredible sensitivity in detecting clairvoyants, especially since the power of the Senshield is to be harnessed into handheld detectors for the military. Paige knows she must prove herself as Underqueen, but she is also determined to find the core of the Senshield's power.

The book starts off a little too slowly for my taste, but I got back into the story fairly quickly. Once the story shifted focus to the introduction of the Senshield and its deadly implications, I was more hooked. The Senshield is a game-changer for voyants, and Paige is forced to move the Mime Order underground to survive. Destroying the Senshield is the main focus of this book, but there are other problems. For example, Paige's tenuous hold as Underqueen, the Rephaite-human Mime Order relations, her complicated relationship with Warden, Hildred Vance (a villain almost as bad as Nashira). There is no shortage of threats and death surrounding Paige.

This book really tests Paige's character. As Underqueen, she must make difficult and sometimes cruel decisions. Paige doesn't like who she is becoming. She wants to prove herself and she also wants to redeem herself. You can also see how Paige resolves herself to become a martyr, at a certain point in the story. But it was good to see how Paige handled conflict after conflict, because she didn't become a martyr or a coward - she survived and fought and became stronger, by the end of the book.

One of my favorite aspects of this series is the barely-there romance. This book was a little odd, in terms of the romance. On the one hand, things definitely progress in a little steamier direction (though not overly so), between Warden and Paige. But on the other hand, Paige plays the I'm-Underqueen-and-I-can't-afford-to-be-distracted card, for much of the book. The two of them share a very powerful connection, both psychically and emotionally, and it's of course very silly for her to think they can turn it off because she's now Underqueen. Like I said, the romance is barely there and very subtle, but I also liked its progression. By the end of the book, things there were unsaid are better handled by Paige. I definitely want to see more from the romance in future books.

There is plenty of action, plenty of close calls, and plenty of betrayals and double-crossing. The secondary characters are so important in this book, and I loved seeing some of them flourish. I adore Nick, and Eliza, and Warden of course (though I think of Warden as more of a primary character). I would love to see Warden play a more critical role in future books - though he was instrumental in this book.

As always, the world-building of this series is so well-written. It's an easy world to lose yourself in, though it's a brutal and unforgiving world. I'm still trying to wrap my head around all of the different orders of clairvoyants, but I like that we get to see so many different types and their powers in action.

I'm going to put this as a little bit of a warning - there is some torture in this book, which broke my heart. As far as torture goes, it's not the worst that could have happened, but be prepared to read about Paige getting tortured. Again, it's not as bad as it could have been, but it's there. Paige definitely comes out a lot stronger, and that part of the plot served a higher purpose for the story in general.

We know this is going to be a seven-book series and so this book ends nowhere near resolved. Certain aspects of this book specifically are resolved, but the overall plot (voyants being screened and hunted, Nashira's grand plan, etc.) is far from concluded. While this book does not end in a cliffhanger, it'll definitely leave you wanting more.

I suppose this one moved a little too slowly, initially. It took over one hundred pages for me to finally feel like I was invested in the story. The first one hundred or so pages focus more on Paige's struggles as Underqueen, which I found... boring? Perhaps necessary to the story (especially given the ending of the book), but boring nonetheless.

So you know when the books in a long book series are almost like episodes of a TV show, in which there is a problem and it's resolved by the end of that one episode? That's definitely the setup of this book, with a new problem introduced and a resolution to that problem by the end of the story. There is nothing really wrong with this, but I guess I wanted more from the overall series plot, how this book is tied in with the other two books and the remaining four. Yes, there is always the threat of Nashira, and the threat to voyants by the government, but I guess I wanted to know more about where this series is heading.

Also, this is book three of an adult fiction series. I am unashamed when I say that I wanted more from the romance. Hint. HINT.

I can't speak for the series overall, because it's such a long series and I'm not sure if it'll pay off (long series scare me). I can't really gauge the direction of the series at this point, and I can't tell if Shannon is the type of author to slaughter everyone in the end, or give a hopeful ending, or whatever. It's too early to tell, and she doesn't give us much to look forward to, in terms of the overall plot. So I can't say I do (or don't) recommend the series in general. So far, it's an intriguing series, and fans of dystopian novels will enjoy it.

But in terms of this book, sure, I recommend it. If you've read the other books, you won't be disappointed by this sequel. It does move the story along, and there is a fair amount of character growth (Paige), heightened stakes, developing romance, etc. It's a good sequel.

3.5 stars -> rounded up to 4 stars. So far, Shannon has not disappointed. While this isn't a new favorite or anything like that, I am pretty pleased with this book and it has left me wanting to read book four. I hope Shannon writes it faster than this book, or The Mime Order!