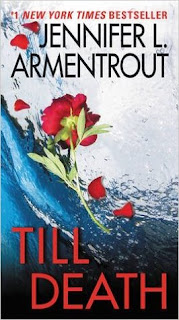 It’s been ten years since Sasha Keaton left her West Virginia hometown . . . since she escaped the twisted serial killer known as the Groom. Returning to help run her family inn means being whole again, except for one missing piece. The piece that falls into place when Sasha’s threatened—and FBI agent Cole Landis vows to protect her the way he couldn’t a decade ago.

First one woman disappears; then another, and all the while, disturbing calling cards are left for the sole survivor of the Groom’s reign of terror. Cole’s never forgiven himself for not being there when Sasha was taken, but he intends to make up for it now . . . because under the quirky sexiness Cole first fell for is a steely strength that only makes him love Sasha more.

But someone is watching. Waiting. And Sasha’s first mistake could be her last.

Jennifer L. Armentrout has proven that can write just about any genre and totally rock it. She has written countless Young Adult, New Adult, and Adult novels across many genres - contemporary, paranormal, fantasy, romance, and a combination of all of those. Add romantic suspense to that list! Till Death is very different compared to her other books, but it's easily one of her best books.

Sasha Keaton is coming back to her hometown after ten years, to help her mother with her struggling inn. Ten years ago, Sasha was kidnapped by the Groom, but she escaped, becoming the first and only victim to do so. Ten years later, right around the time of her coming back to West Virginia, the kidnappings and murders begin again, and with so many details being exactly like how the Groom used to do things, it can't be a coincidence. Sasha isn't safe, and neither are countless innocent women. Sasha, her mother, her friends, and Cole Landis might not have enough time before this serial killer comes after Sasha for good.

This book really delivered on the "suspense" aspect. At first I thought I was going to be reading a carbon copy of Katee Robert's The Devil's Daughter, which just published a month ago. That book was awesome, by the way. There were definitely similarities, but the two books are so different. Both authors really nail the suspense, and the romance too, though I will say that Armentrout slays when it comes to romance, and this book was no exception.

From the start, you can tell how much Sasha's traumatic past is still affecting her. She has nightmares, flashbacks, and panic attacks, and just being back make sure shake. But she is not a coward and in many ways, she isn't afraid. I love how strong Sasha is and how much stronger she becomes. As the story unfolds, the case gets weirder and creepier and more connected to Sasha, but she handles everything well. Realistically, and also, well.

Suffice it to say, I liked Sasha. I liked her vulnerabilities and her walls. She had every right to be afraid and closed off. But it was nice to see her open up and really live...

... Which a big part of that is because of Cole Landis. Ten years ago, Cole and Sasha were in the beginning of what would have been an adorable and swoony relationship, as two college students. He is three years older than her, and now he is an FBI agent. Ten years didn't diminish her feelings for him - and it turns out, the same is true for him. Cole is a huge part of Sasha's emotional journey of this book. He is with her through everything that happens in this book, and cares for her and protects her like a man that will never give up and won't let go. Cole is such a sweetheart and a fiercely protective man, and he's exactly what Sasha needed - and wanted. I swooned over the man at least a dozen times because dang, he is definitely too good to be true.

The romance is and isn't a big part of the book. It certainly isn't the most important aspect, but it is very, very there. Cole and Sasha reconnect and fall for each other (again) pretty quickly, but not in an insta-love type of way. This romance is technically a second-chance romance, but without all the angst of one person hurting the other and breaking up. So it was a second-chance romance, but really, it was a first-love romance too. I adored the romance.

A note - this is 100% an adult romantic suspense novel. There are some very steamy scenes involving Cole and Sasha. I definitely approve and loved their significance, but just keep that in mind if you're a younger reader or looking to recommend this book to a younger reader.

One thing I want to mention is how Sasha's kidnapping/experience (for lack of a better word) is so heartbreaking and cruel, but it isn't a major plot point. Like, the awful, sick things that the Groom did to her aren't totally and fully stated - and it isn't necessary, because (1) we can read between the lines for what isn't stated directly and (2) this book isn't entirely about her moving through that trauma. She spent six years doing intense therapy to work through that trauma. I like that this book didn't focus on her emotional pain from what the Groom did - though what he did was extremely important (and terrible and twisted and sick) to the story.

The author twisted the story so that you're not quite sure who the Groom was and who the new killer is. BUT, I will say that upon meeting a certain character, I knew that would be the killer. I just knew. One critical detail about that character, mentioned in passing when the character is first introduced (somewhat early on in the book) tipped me off. I was confident that that was the killer, and I looked for shady behavior and "Easter eggs" as I read. It sucks that I knew early on, but I'm pretty sure that was just me and most people won't guess so early. So, be prepared to be swung all over the place, because even though I got the killer correct, there were other aspects that were extremely surprising.

Overall, this book really delivered, in terms of the suspense, and the romance. I loved how important both of those aspects were to the story. I love Cole and Sasha's relationship and how strong it was, completely unshakable and no drama. I loved seeing Sasha get stronger and move forward - but Cole too (because what happened to Sasha really affected him too). I really enjoyed this book!

I already talked about this above, but I'm kind of sad that I guessed the killer so early on. Again, it's likely just me being too clever and/or suspicious of everyone, and I think most readers so far were fairly surprised. And there are other aspects of the climax and ending that will surprise you. Anyway this is a "dislike" that isn't really a dislike because it's entirely my problem/fault!

I highly recommend this book if you like suspense! Or if you like romance, because this book keeps pretty steamy (like, adult romance steamy), and the romance is so sweet. I'm not totally into suspense (I'm a scaredy cat) and this book was kind of scary/creepy but not so much so that I was freaked out (and again, I'm the scaredest of scaredy cats). I highly recommend this book, but also The Devil's Daughter by Katee Robert (though that book's romance it a little less X-rated).

4 stars. Maybe don't do what I did and read this one at night! Read it in broad daylight but also in an enclosed area where you know all of the exits and entrances... this book has me feeling so paranoid right now. This is the sixteenth book of Armentrout's that I've read, and I think it's her best yet. Not necessarily my favorite (though it's up there), but in my opinion, her most well-written book yet.