Review: The Beast Is an Animal by Peternelle van Arsdale 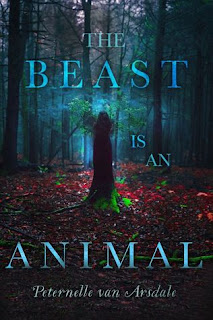 A girl with a secret talent must save her village from the encroaching darkness in this haunting and deeply satisfying tale.

Alys was seven when the soul eaters came to her village.

These soul eaters, twin sisters who were abandoned by their father and slowly morphed into something not quite human, devour human souls. Alys, and all the other children, were spared—and they were sent to live in a neighboring village. There the devout people created a strict world where good and evil are as fundamental as the nursery rhymes children sing. Fear of the soul eaters—and of the Beast they believe guides them—rule village life. But the Beast is not what they think it is. And neither is Alys.

Inside, Alys feels connected to the soul eaters, and maybe even to the Beast itself. As she grows from a child to a teenager, she longs for the freedom of the forest. And she has a gift she can tell no one, for fear they will call her a witch. When disaster strikes, Alys finds herself on a journey to heal herself and her world. A journey that will take her through the darkest parts of the forest, where danger threatens her from the outside—and from within her own heart and soul.

The Beast Is an Animal is one of the strangest and most intriguing books I've read in a long time. It's one of those books that made me think, what in the world did I just read? But in a good way. From the start, I was hooked into the story and there was no stopping until I knew how it ended. I haven't seen a lot of my fellow blogging peers read this one (yet), but I certainly hope that changes, because this book is one for the ages.

Alys was seven years old when she saw the soul eaters - the night they found her wandering in the fields, and left her alone. The next morning, every single adult in her village was dead, but all the children were alive and sleeping. Alys and the other children of Gwenith are taken to Defaid, where the Elders allow them to live, but keep them under strict rule. The children of Gwenith are charged with guarding Defaid's new Gate, to watch for the evil soul eaters. Alys has never feared the soul eaters. In fact, she has seen them many times since that night when she was seven - and she has seen the Beast too. The Beast has spoken with her, and warns her that the soul eaters must be stopped. Alys must find a way to stop them before even more people are hurt.

This book has a fairy tale vibe to it. This story could fit right in with Grimm's Fairy Tales, or some of the classic, old fairy tales that we all know and love. It has a mystical, creepy atmosphere to it, which a lot of the original fairy tales had. It's not a cutesy, happy story. It's dark and heartbreaking, but there a hopeful tone to it, especially towards the end.

The story is written in third-person, limited to Alys's POV, and occasionally, a short narration of the soul eaters' wanderings. Having this story told in third-person was the best way to go about it, because it added to the dark fairy tale vibe. There is a Beast, and there are creepy soul eaters that are never satisfied. I am glad that van Arsdale gave us their backstory as well, to see how they grew to be what they became.

I liked Alys a lot, and my heart ached for her during the story. Her parents die, she is taken to an unfamiliar place with rigid rules and cold, harsh people, and she and her Gwenith peers are isolated from each other. Alys and the others live in Defaid for about nine years, and then things change. So about half the story takes place from Alys being seven to Alys being sixteen. This lengthy period of time is so necessary to understanding Alys, and seeing how she grows. She fears a darkness in her, a darkness that she didn't always have.

The story was so engrossing and intriguing, and there was no way I was going to put the book down until I was finished. It went by very quickly, especially since I was so hooked. I was alternating between biting my nails and turning pages, because things started to get intense pretty quickly. Life in Defaid is cruel, and life outside of Defaid isn't much better, though it's definitely not worse. When Alys finally leaves Defaid, she finds a little comfort, but she is still trying to understand a darkness that hangs over her head.

There is a little romance that gets stronger towards the end of the book! I thought Alys and her boy were adorable together. Cian is so happy and good, and Alys is cautious and hardened from years of folding in on herself and letting no one in. The two of them are complete opposites, and yet they are exactly what each other needs. The romance is in the background and it's very subtle. The pair don't even meet until about halfway into the story, so don't think that the romance is the biggest part of the story (because it isn't). And yet, it's one of the few sweet and hopeful parts of the book.

I don't even want to begin to describe what starts to go down in this book, as it gets closer to the end! You'll have to read it to really understand. There are wonderful people and awful people in this story, and there are terrible parts and heartwarming parts. I was really satisfied with the story overall, as well as the character development, the romance, and the ending. The ending wrapped up so perfectly and neatly and I have no complaints about that.

I don't think I have anything specific to complain about, really! This one isn't quite a five-star read for me (those are reserved for new favorites), but it's good and I'm very pleased.

I highly recommend this book for those who love fantasy, or fairy tales, or retellings, or any of those types of stories that involve a stretch of the imagination. This story belongs among the classic fairy tales, the fantasy stories that you hear about centuries later. It is dark and intriguing, with a somewhat creepy tone to it. And yet, it is hopeful and powerful too.

4.5 stars -> rounded down to 4 stars. I am very glad that I took a chance on this book, despite knowing nothing about it before reading it. I sort of can't believe it's only van Arsdale's debut - she is such a wonderful writer! I look forward to reading more books by her.