Science in Fiction (#25): Empress of a Thousand Skies by Rhoda Belleza

This month, I'm featuring Empress of a Thousand Skies by Rhoda Belleza! 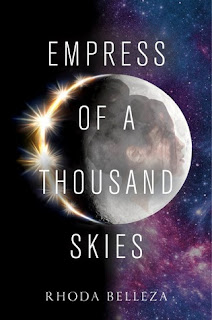 My review of Empress of a Thousand Skies

Empress of a Thousand Skies is an interesting space-opera type of science fiction novel, involving a girl who has trained her entire life to become the rightful ruler of the planetary region. But she isn't empress yet, especially since someone else has assumed power and is unwilling to give it up, especially not to a sixteen-year-old girl. Like a dictator with no regards to policies, rules, or the people he governs.

We all know about a certain recently elected leader who fits that description.

Today, I'm going to be talking about all of the ways that President Trump has already started to move against the environment, and science in general.

Before I begin, recall my Science in Fiction post for December (2016). I said I would check in and keep an updated list of everything Trump has been doing. This is update post #1 for 2017.

- Climate change information no longer appears on the White House website. Everyone knows that Trump (and many Republicans) believe that climate change isn't real, and/or that it's all a hoax cooked up by the Chinese (or something absurd like that). But it was shocking to see all evidence of climate change mentions completely scrubbed from WhiteHouse.gov.

- Climate change information is starting to disappear on the EPA website. This is scary to me personally because I use the EPA website a lot, to study and for various projects and points of information. The Trump administration is doing a number on that website, in addition to the White House website. The United States is a leading authority on many different types of environmental research and knowledge - if WE take away climate change information and data, other countries will follow suit (or continue not to care).

- EPA employees are banned from given social media updates. And there are additional specifications on press releases, posts, and updates on the agency's accounts. This might not seem like a big deal, but it is. Straight-up banning employees from putting information out to the public is NOT okay. Trump and his administration could sweep so many things under the rug (like the lack of environmental controls in the DAPL project) and EPA employees wouldn't be able to say a thing about them. Speaking of DAPL...

- The Dakota Access Pipeline project has been advanced. The Keystone XL project too. Which... is a problem? There is no Environmental Impact Statement associated with the project (and an EIS is required for EVERY and ANY project disturbing the environment). There are little to no environmental controls on this project. But of course, Trump has stakes in the project, so he's rather invested in its construction. Because THAT is how the president on the United States should make decisions - with his own interests in mind!

- Sean Spicer is telling everyone that the Trump administration will ensure that coal is the cleanest and safest form of energy possible. Yeah, right. "Clean coal" is indeed a term, and it's sort of a thing, but let's be real: there is no such thing as clean coal. No coal is "clean". Coal mining alone is a dirty, toxic process. But Trump and his rich businessmen buddies need to keep profiting so... no solar/wind/tidal energy for us! Just so we're on the same page - coal has NEVER been considered environmental friendly, or a form of "clean" energy. Ever.

- Trump rolled back coal regulations, in terms of waste dumping. Coal sludge and coal mining waste can now be dumped into rivers and streams, because that makes a lot of sense. Do Republicans/Trump not realize that water is connected everywhere and dumping coal waste in one waterway will eventually affect the world? WHO is benefiting from scaling back Obama's regulations on coal mining waste dumping? Not the coal industry - the industry will lose jobs, since dumping coal into waterways (rather than trucking it away and treating it or disposing of it) is now acceptable.

I could keep going, if I kept digging. I'm thoroughly disgusted so I'm stopping here. Look, keep yourself educated and awake, okay? Science and the environment are not the only areas that are being massively affected by this presidency. I could spend posts upon posts on the environment, or immigration, or healthcare. I'll post another Science in Fiction update in a few months! Let's see how much worse things will get.
Posted by Alyssa at 12:00 AM