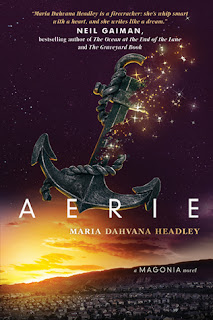 Where is home when you were born in the stars?

Aza Ray is back on earth. Her boyfriend Jason is overjoyed. Her family is healed. She’s living a normal life, or as normal as it can be if you’ve spent the past year dying, waking up on a sky ship, and discovering that your song can change the world.

As in, not normal. Part of Aza still yearns for the clouds, no matter how much she loves the people on the ground.

When Jason’s paranoia over Aza’s safety causes him to make a terrible mistake, Aza finds herself a fugitive in Magonia, tasked with opposing her radical, bloodthirsty, recently-escaped mother, Zal Quel, and her singing partner Dai. She must travel to the edge of the world in search of a legendary weapon, The Flock, in a journey through fire and identity that will transform her forever.

In this stunning sequel to the critically acclaimed Magonia, one girl must make an impossible choice between two families, two homes—and two versions of herself.

I actually think this book was okay, but I didn't love it. It was worth reading because I had read Magonia (and didn't hate it), but the duology in general wasn't really worth reading. For some reason, I really thought this was a trilogy series! A duology series worked so much better for this series.

It's been a year since Aza's last birthday, when she was dying and died and was in Magonia. Her family and her boyfriend are so happy, but Aza isn't. Deep down, she longs to be in Magonia, soaring above the clouds with her heartbird. And Jason, her boyfriend, knows it. There are things that Jason isn't telling her, things that have been set in motion. But there are things that Aza hasn't told Jason. When the time comes, will Aza choose life on earth, or life on Magonia?

Like I said, I didn't know this was a duology! I really like that the series consists of only two books. The ending of Magonia was huge, too intense for a "book one of three". The author set the series up so that this book would contain the big showdown, the big choice. This was well-done.

Things I liked - I remembered next to nothing from Magonia, but the author made it easy to get back into the story and the world. I kid you not, I remember just about nothing. I forgot Jason's name, I had no idea who Eli was (Aza's human sister), I forgot what the Magonians were. But the author provides a lot of information from book one, interspersed throughout the story.

I also liked that this book was fairly short, and it was interesting enough to almost be a page-turner. I wouldn't say I understood everything that was going on, but I was never close to not finishing, at any point. There was a lot going on, though not at first.

About the romance - I guess I liked it. I'll talk more about Aza and Jason individually below, but in terms of them being together, I guess I liked them. It was clear that they loved each other and were very devoted to each other. There is no love triangle.

The ending is pretty satisfying, and wraps things up somewhat well. I'm still a little confused about Magonia and human-Earth, but I think the author left certain things open to interpretation (which I dislike, most of the time). But the ending was pretty good!

There were several things that I didn't like, which brought my rating down. For one, the beginning of the novel is incredibly slow, and there is so much moping and internal guilt happening. Jason is paranoid about Magonians coming down to steal Aza, and he also feels guilty about... something (which is revealed in the book). He's mopey because he knows that Aza wants to be in the sky, not here on Earth. Meanwhile, Aza is in denial, yet she is slowly starting to accept the fact that she really doesn't want to be on Earth with her family (which makes her feel bad).

Basically there is a ton of moping and angst and it was so over the top. I'm not sure if it was just how the author wrote the inner monologues of each character (this book is written in Aza's and Jason's alternating first-person POV), but there was something seriously overdone about the moping and complaining.

To make matters worse, there is so much relationship drama in this book. Aza and Jason have a big fight about things, and then a chapter or two later, we (and Aza) find out what Jason has been hiding, and there is MORE drama.

Let me be frank - sometimes, drama is totally warranted and necessary for the story. Aza had every right to be angry with Jason. But she overreacted, and the way her reactions were written, it was just so over the top. Way too dramatic. Just too much. It's like the author was trying too hard, trying too hard to write a teenager's reaction to something like that. Aza seemed so childish. And Jason! He spends the entire book suffering, drowning in guilt and despair. He's badly hurt physically and emotionally, and all for Aza. This makes me sad... Aza suffered very little, but Jason was tossed around and hurt and he didn't quite care because he thought he deserved it.

The ending confused me a little. Heck, the whole book is confusing at times, but the ending wasn't entirely clear. I got the general idea, and it seemed nice, but the logistics didn't make sense to me.

Basically, this book was okay. It definitely did its job as a conclusion novel. The author got me back into the story and the world well. But the drama was just way too much, especially in terms of Aza and Jason's relationship, and, like Magonia, this book was confusing.

I find it hard to recommend this book, even if you read Magonia. If you really loved Magonia, then this is definitely worth the read. But if you're like me and barely remembered a thing about Magonia, don't even bother. And if you haven't read Magonia, definitely don't bother.

3 stars. Meh. Not bad, I can see the appeal of the author - she has an interesting writing style. But this story was weird, confusing, and not great. I don't think this author's books are for me, but that's okay! Now I'm sure.