Review: Bound by Blood and Sand by Becky Allen 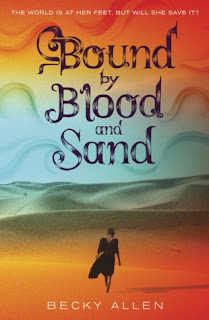 Jae is a slave in a dying desert world.

Once verdant with water from a magical Well, the land is drying up, and no one remembers the magic needed to keep the water flowing. If a new source isn’t found soon, the people will perish. Jae doesn’t mind, in a way. By law, she is bound by a curse to obey every order given her, no matter how vile. At least in death, she’ll be free.

Elan’s family rules the fading realm. He comes to the estate where Jae works, searching for the hidden magic needed to replenish the Well, but it’s Jae who finds it, and she who must wield it. Desperate to save his realm, Elan begs her to use it to locate the Well.

But why would a slave—abused, beaten, and treated as less than human—want to save the system that shackles her? Jae would rather see the world burn.

Though revenge clouds her vision, she agrees to help if the realm’s slaves are freed. Then Elan’s father arrives. The ruler’s cruelty knows no limits. He is determined that the class system will not change—and that Jae will remain a slave forever.

I had a feeling that I would love this book, and the book did not disappoint me! Desert fantasy novels are some of my favorite fantasy books (Vessel by Sarah Beth Durst, Forbidden by Kimberley Griffiths Little, Rebel of the Sands by Alwyn Hamilton, etc.), and I can safely add this book to that list of awesome desert fantasy novels.

Jae and her twin brother Tal are Cursed slaves at Aredann, an outlying estate whose reservoir is rapidly drying. The lack of water might be because of the drought, or the increasing population in cities, but the Highest are supposed to be in control of the magic that keeps the water flowing. Elan, son of the Highest, has come to Aredann to try and find the Well to save Aredann, but his father has declared that Aredann be abandoned. But Jae is the one to find hidden magic that enables her to find the Well. Broken of the chains of the Curse, Jae will stop at nothing to free Aredann and the other slaves from the Curse and its cruel ruling family.

One of the things that I did not expect from this book was how heartbreaking it was. Jae and the other slaves (called "Closest") are Cursed because of their "traitorous bloodlines" (an ancestor betrayed the Highest, years ago). The Curse is such that the Closest must obey any order given by an Avowed or Highest. Meaning, any question asked, any order given, must be followed, and the truth must always be told. If orders are not followed, the Curse causes great pain - which is how orders are always followed, truths are always told.

A large part of this story lies in the heartbreaking part I'm going to talk about. The Closest are given orders... including lying with any of the Avowed living at the estate. Meaning, any Avowed can tell any of the Closest to "visit his/her chamber" and the Closest must obey. In plain terms, the Closest are often raped by the Avowed. Jae is not spared, neither is Tal, or any of the other young Closests. This was a hard pill to swallow. I almost stopped reading the book.

BUT, the author's treatment of rape is, in my opinion, good. Meaning, the author writes the tortured helplessness of the Closest well, without going into explicit detail about what happens with the Closest and the Avowed. And we find that the one Avowed that touches Jae ("touches") is properly dealt with at some point, which made me feel a little better. Still, the psychological and emotional damage... especially in Tal's case. My heart broke over and over for Tal. For Jae too, who now hates to be touched.

So, this book is rife with heartbreak and tough issues. I usually do not go for books with rape (I just can't - I'm sorry), and so this book took me by surprise. However, I was able to keep reading, and to understand how important that part of the story and the world-building really was. And our heroine is so strong and capable, and handles herself well.

So the world is a tough one, a heartbreaking one, but a very well-constructed one. As much as the rapes freaked me out and the general idea of slavery too, I was horrified and fascinated with the estate. I was rooting for Jae to find a way out, or a way to change things.

Jae is... she is such a strong heroine. This book is written in third person limited (alternating between her and Elan's third person POVs). I adored Jae so much, and I was cheering for her from start to finish. You can't not feel for her, and want her to get out of there. Her new magical abilities are pretty cool, and I like that she isn't some kind of prodigy (yet). I liked Tal too, though he is more passive than Jae. Tal has his strengths though, and he's very important to the story.

Elan is the prince (but not the heir), and he really wants to prove himself to his father. Unfortunately, things don't work out as planned, and Elan learns some truths that his father hid from him (and everyone). Elan starts as a somewhat passive prince, not wanting to cross his father, but he grows a spine by the end of the book. I look forward to seeing more character growth from him.

There is very very VERY little romance in this book, which I actually really appreciated. I could see Jae and Elan being a thing, but there is so little in terms of romance in this book. In fact, really, there are one or two lines that indicate potential budding of feelings or chemistry, but no touchy-feely physical or emotional scenes. Which really worked in this story! I hope to see more though, in the next book.

Overall, I enjoyed this book. The ending is so sad, though very hopeful too. The story in general made me so sad, and I was taken aback by the content (it's just not what *I* expected). However, the fantasy world, the characters, the setting, and the story were so well-written. I was totally engrossed, and now I want more!

I can't think of anything that I didn't like, at the moment. There were things that surprised me and freaked me out a little (rape, slavery... those things SHOULD freak people out), but both had their place in this world.

If rape and slavery and lack of free will are difficult for you to read, perhaps avoid this book! It's a much heavier fantasy novel than most YA fantasy novels these days. But if that content doesn't bother you too much (I don't know how to phrase that without it sounding callous, sorry!) or you are interested in such a story, definitely give this book a chance. Good fantasy, good treatment of the issues, and really great characters.

4 stars. I look forward to reading the next book in the series! I'm excited to see where things will go. Will Jae be forgiving and merciful? Will she and Elan be betrayed? I can't wait!