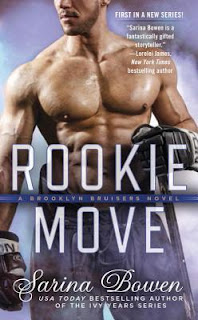 In high school they were the perfect couple—until the day Georgia left Leo in the cold...

Hockey player Leo Trevi has spent the last six years trying to do two things: get over the girl who broke his heart, and succeed in the NHL. But on the first day he’s called up to the newly franchised Brooklyn Bruisers, Leo gets checked on both sides, first by the team’s coach—who has a long simmering grudge, and then by the Bruisers’ sexy, icy publicist—his former girlfriend Georgia Worthington.

Saying goodbye to Leo was one of the hardest things Georgia ever had to do—and saying hello again isn’t much easier. Georgia is determined to keep their relationship strictly professional, but when a press conference microphone catches Leo declaring his feelings for her, things get really personal, really fast...

This is the first book I've read by Sarina Bowen, and I liked it! I usually enjoy sports romances, especially ones featuring hockey players. Many of my blogger friends have enjoyed Bowen's other novels, and so I was happy when this novel did not disappoint me!

In this novel, the publicist of a hockey team gets the shock of her life when a new player is signed on the team, and that player happens to be the boy she dumped six years ago, Leo Trevi. Leo is determined to make an impression on this team and coach, but it's hard to ignore the girl that gave him the boot six years ago. He never stopped loving her or wanting her, and his stubbornness hasn't changed. Leo and Georgia were always the perfect couple - did the flames ever die?

I have a love-hate relationship with second-chance romances. It's not my favorite romance trope, though I do enjoy it. I've struggled with the most recent second-chance romance novels I've read. In this one, the girl breaks up with the boy, and the reason makes me sad. Georgia is raped during tennis camp the summer before her senior year. Leo never leaves her side, and is with her through thick and thin. Georgia wouldn't have survived the year without him, but she decides to break things off. Now, six years, later, he's back, and he's even more irresistible than ever.

Leo is... well, he's probably on my top ten favorite male heroines of adult romance novels I've read in 2016. He's sweet and patient, yet stubborn and willful. He's charming, and he's hard-working. It's clear that he loves his sport and he values his spot on the team. But it's also clear that he never stopped loving Georgia, and he doesn't want to stay away from her. It's his persistence that leads to the HEA, because Georgia was resistant at first.

I was a little hesitant in liking Georgia at first. Her reasoning for breaking up with Leo needed some work (in my opinion), and I found it hard to feel bad for her when Leo is signed on the team. At first, she is constantly annoyed around Leo, which isn't attractive. But I like how Leo's persistence and his kindness breaks her down. We see why she is scared to try again with him.

The romance is sweet, and definitely steamy, and I was rooting for Leo and Georgia. I'm glad that the romance is linear and not too much drama-filled. There is an ex-girlfriend appearance on Leo's side, and then one of Leo's teammates makes a pass at Georgia, but there is no possibility of a love triangle or anything. I liked the romance, and the progression of Leo and Georgia's relationship.

There are some tough issues that Leo and Georgia have to work through, but I liked that the rape wasn't made the center of the story. Yes, the breakup revolved around the rape, but I'm glad the author didn't turn this (steamy) novel into a tragic and depressing story. But I'm also glad to see Georgia and Leo work through their issues together.

Overall, the romance was well-written and enjoyable. I liked the large presence of hockey in the book (I love hockey!). There were a number of steamy scenes in the book, and a lot of cute and funny moments too. A good mix of everything, really.

Like I said above, I hesitated to like Georgia at first. In the end, I liked her, but I had a hard time summoning sympathy for her when it came to Leo. SHE dumped him - but HE'S the one pursuing her and practically begging. In my opinion, she's the one who should be begging for his attention... not the other way around.

But it's hard not to adore Leo's persistence. Good for him!

If you like adult romance novels, especially sports romance novels, this is definitely one for you. I can't speak for Bowen's past works, but this one is well-written and definitely shows her skills as a romance writer. It almost reminded me of a certain New Adult novel (The Deal by Elle Kennedy)!

4 stars. I'm looking forward to reading Hard Hitter! O'Doul is next up, and I'm sure the captain will have quite a story.