Waiting on Wednesday (#194): These Ruthless Deeds by Tarun Shanker and Kelly Zekas 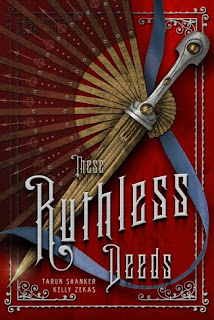 England, 1883. Still recovering from the loss of her beloved sister, Evelyn is determined to use her powers to save other gifted people from those who would harm them. But when her rescue of a young telekinetic girl goes terribly wrong, Evelyn finds herself indebted to a secret society devoted to recruiting and protecting people like Evelyn and her friends.

So I didn't totally love These Vicious Masks. But I'm still excited to read its sequel!
Posted by Alyssa at 12:00 AM