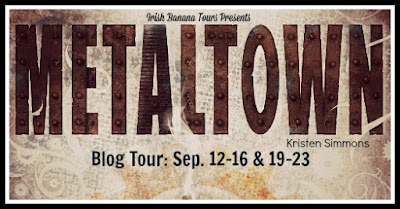 Welcome to the blog tour for Metaltown by Kristen Simmons! I had the pleasure and honor of reading this book early, and I loved every thrilling, heartbreaking moment of it. Check out my full review below, and be sure to enter the giveaway! 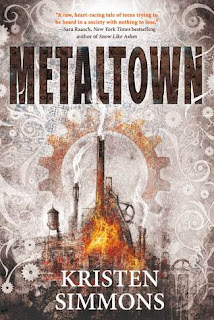 Metaltown, where factories rule, food is scarce, and hope is in short supply.

The rules of Metaltown are simple: Work hard, keep your head down, and watch your back. You look out for number one, and no one knows that better than Ty. She’s been surviving on the factory line as long as she can remember. But now Ty has Colin. She’s no longer alone; it’s the two of them against the world. That’s something even a town this brutal can’t take away from her. Until it does.

Lena’s future depends on her family’s factory, a beast that demands a ruthless master, and Lena is prepared to be as ruthless as it takes if it means finally proving herself to her father. But when a chance encounter with Colin, a dreamer despite his circumstances, exposes Lena to the consequences of her actions, she’ll risk everything to do what’s right.

In Lena, Ty sees an heiress with a chip on her shoulder. Colin sees something more. In a world of disease and war, tragedy and betrayal, allies and enemies, all three of them must learn that challenging what they thought was true can change all the rules.

An enthralling story of friendship and rebellion, Metaltown will have you believing in the power of hope.

I'm a huge, huge fan of Kristen Simmons' books, but I was slightly nervous before reading this one. The synopsis sounds love-triangle-y, doesn't it? Plus I read a review written by a very disappointed friend, who made some valid points that I had a feeling would bother me. But when I read the book, I found that I didn't have those same issues, and that I really enjoyed the story. Folks, Metaltown is a heart-pounding and truly heartbreaking story, and it was definitely worth the read.

Metaltown follows the lives three teenagers, two living in Metaltown, one living in the River District. Colin and his family didn't always live in Metaltown, but they do now, and they work in the factories with terrible conditions and awful pay. You mess up, you're fired. Colin and Ty are best friends. Ty is a street-smart orphan, earning her keep just like Colin and so many other underage children with no rights. Meanwhile, Lena Hampton, daughter of Josef Hampton who owns all of the factors, is living a rather cushy and rich life in the River District, a life so different and so privileged. But not all that glitters is gold - even Lena's life is filled with cruelty. The Hamptons' lifestyle depends on the the factories producing weapons for the war. But when certain events occur, the workers of the Small Parts factory decide that they've had enough. A spark turns into a wildfire, and the rebellion begins. But will Lena side with the workers? Will Colin put aside his personal duties for the benefit of everyone? Will Ty accept her fate?

I'm going to be honest - typically I do not enjoy books that follow more than two people. In this book, we get three third-person POVs - Colin's (whose is first), Ty's, and Lena's. This practically screams love triangle (I'll get to that later, but don't worry), and messiness. But Simmons did a really great job in writing the three POVs, and telling the story using each voice. She kept the story flowing at a great pace, and every chapter (which was a POV switch) tied in well with the overall plot. It was clear that each chapter was strategically written from that specific person's POV, and made sense.

Colin's POV is first, and I like to think of him as the "main" protagonist, even though all three are "main" protagonists. Colin is protective, extremely loyal, and very selfless. He works to support himself, his parents, and his brother. He stands with the workers, and for the workers, even when the workers themselves wouldn't band together. Colin is a natural leader, with so much charisma and charm. I adored Colin so much.

Ty is a hardcore spitfire of a girl. She's so tough and so strong, and she goes though so much in this book. Out of all of the characters, I think Ty had it the worst. She suffers a terrible injury, and then loses her job at the factory, and then has nowhere to go. She and Colin look out for each other, and are family to each other. I liked their friendship - it seemed fairly platonic on both sides. I like how protective Ty was of Colin, and how protective she was of other workers too. Ty isn't as obviously selfless as Colin is, and she does have her survival-of-the-fittest moments, but Ty is always trying to help the factory workers. Always.

Lena... it took me a bit to warm up to her. She's the stereotypical spoiled brat, the princess of the kingdom. What makes things worse is that she has no idea of the conditions of the factories, the lack of pay, lack of medical care, etc. But she wants to get involved in the family business, which is how she ends up on a tour of the Small Parts factory. Lena is so naive in the beginning of the book, which is why it was hard to like her. But I did end up liking her; she could be any of us - born in privilege, sheltered all her life, somewhat brainwashed. But Lena is her own brand of strong - she discovers many truths for herself (about the factories, the war, her father, the company). She learns to fight back, to stand up, to choose. I like Lena and I like the development of her character. Her character development is the most obviously progressive (not that the other two do not have great character development!).

Gosh, what an incredible and heartbreaking world Simmons has created. It's very futuristic, a world that we could be living in, in fifty years. Food had to genetically enhanced and modified, but it wasn't tested because it had to be mass-produced, and many people got sick and died from eating the modified corn. Children work in factories for little to no pay (this is a current problem). Brotherhoods are bribed to keep workers happy. Water isn't clean. A war is raging. The world that Simmons has created is very authentic and real, in a futuristic way. It's a hard place to live, with so many people starving, begging, dying. Life working in the factory is miserable.

I feel like all of Simmons' books are somewhat heartbreaking, with cruel worlds and harsh conditions, the survival type of books that could easily be real, in the future. Simmons writes these themes of pain, suffering, death, and hope very well. The story is heartbreaking, but powerful. There is quite a bit of pain and death in this book, but there is also a lot of positive, strong relationship. Human resilience in the face of miserable times!

I said I would talk about the romance. I was so, so worried about a love triangle. But I quickly found that Colin and Ty are like family, and they are very platonic friends. I think Ty is very protective of Colin, but not in a romantic way. Colin and Lena are the romantic pair in this book. It's weird and cute - the poor working-class boy from the other side of the tracks and the rich spoiled princess from her castle high on the hill. I thought the romance was sweet, and fit well. It's a slow-burn type of romance, and there isn't much to the romance (much like The Glass Arrow - the romance is there, but there aren't many physical interactions), but I liked this.

The ending wraps up very well, yet in a heartbreaking way. I saw certain things coming, but I still felt sad over the ending. I would have liked to see how things shaped up, say, 20 years from the ending, but there isn't an epilogue so we don't know how the Great Plan ended up working out. But I can imagine it in my head!

Overall, I liked this book. I shouldn't have been so worried. No love triangle, interesting story, wonderful characters. And it's a standalone!

I would have loved to see more physical and romantic interactions from Colin and Lena. Lena is somewhat innocent since she's never really allowed to be around people other than her father, brother, and house staff. I would have liked to see more from Colin and Lena, getting used to being physical with each other... that sounds weird, I know. There is only one kiss in this book. There isn't any hand-holding or picking up or cuddling or anything. Maybe it isn't Colin and Lena's style. But I would have loved to see, rather than accept as true, Lena's trusting in Colin, her giving him more and more permission to be with her.

I'm not sure if that makes sense! It would have made Lena's character development more complete, and of course, there would be more in the romance department between Lena and Colin (which I am ALWAYS fine with!).

Be warned - this isn't a cute story, a happy story, a story that you want to read if you're in the mood for something feel-good. BUT. It's a great story about rebellions and friendships and trust and hope. I liked the story a lot and would recommend it.

4 stars. I think my favorite Simmons book remains The Glass Arrow, but I liked this one too! 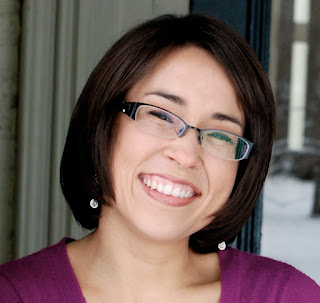 Kristen Simmons is the author of the ARTICLE 5 series, THE GLASS ARROW, and the upcoming METALTOWN (Tor Teen). She loves her family, Jazzercise, and chocolate cupcakes. She currently lives in Cincinnati, Ohio.

For more updates on Kristen and her writing, visithttp://www.kristensimmonsbooks.com

Win one of (3) Finished Copies of Metaltown! (US Only)