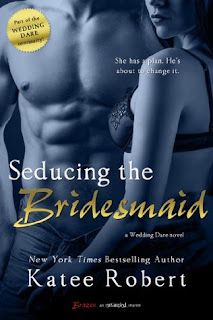 She has a plan. He’s about to change it.

Regan Wakefield is a headhunter in both name and personality: driven, motivated, and unafraid to pursue what—and who—she wants. Naturally, she’s thrilled when her friend's wedding offers her an opportunity to score Logan McCade, the practically perfect best man. Unfortunately, groomsman Brock McNeil keeps getting in her way, riling her up in the most delicious of ways. But Brock’s smooth southern charm isn't part of the plan...so how exactly did they end up having searing-hot sex?

A short, fast read that featured a sweet and charming hero, and a prickly and rude heroine. Katee Robert is one of my favorite adult romance authors, but this was not one of my favorite books by her. It's one of her earlier ones, so perhaps it wasn't her best in general? It was okay, but not great. On a positive note, I like this Wedding Dare series. It's compromised of short Brazen novels, written by a different author, but all part of the same story and characters (different hero/heroine per book).

This is Regan and Brock's story. Kady and Colton are getting married, and as friends of each, Brock and Regan are there for the wedding. They're part of the wedding, as a groomsmen and a bridesmaid. Regan is a thorny, mean, assertive businesswoman, and Brock is a sweet man who seems like an underachiever - but he isn't. Regan doesn't give Brock the time of day, but the pair has really smoking chemistry. Even though Regan turns him away the first few times, she'll start to realize that maybe she was wrong about Brock.

I liked Brock so much. From the start, you can tell that he is a true Southern gentleman, and he isn't using his Southern charm to get in with the ladies. He's a sweet guy with a hint of arrogance and a lot of confidence. He's used to everyone seeing him as the rich, spoiled, lazy second son, but that's because he doesn't correct anyone and he hides who he really is and what he really does. I loved Brock's complexity, and his internal turmoil. This book is so short and yet we see so much of Brock's thoughts and emotions. He's such a great guy too! Chivalrous and very charming, honest and perceptive.

Regan... is the reason why this book is getting a so-so rating. So I'll talk about her in the next section. I didn't love the romance between these two, but I thought they had really great chemistry. I didn't like Regan in most of the book, but I thought she was pretty okay in the end. SHE came chasing after him and fighting for him, so that definitely won her a ton of points.

This isn't Robert's steamiest book by a long shot - heck, I was a little disappointed - but there were a few sizzling scenes, and like I said, the chemistry was great.

Overall, not bad, and definitely a good addition to the Wedding Dare series. There was great character growth for both protagonists. But the story could have been better.

I didn't like Regan. She's mean, so rude, and she could stand to relax a little. In a way, she's portrayed as the stereotypical workaholic businesswoman, in fiction: dominant, bossy, assertive, commanding, rude, lonely, sexless, etc. I didn't like this. I don't think businesswoman are like that at all (some are). Why go straight for the heaviest of stereotypes?

And I really didn't like her anyway. She is a bit cruel to Brock, in the beginning of the book. And she's so hot and cold in the book - honestly, her mood swings were giving me whiplash. One minute she is using Brock to try and meet someone else, the next minute she's running right back to Brock, then she's running far away from him... good grief, woman. Mixed signals much? Way too much drama. I don't know why Brock went to all that trouble.

Regan's attitude at the very end of book won her some points for me - she went chasing after Brock (and not the other way around). Good. Honestly, she was not put in her place NEARLY enough, in this book. She was wrong over and over and no one seemed to want to correct her? I think she should have suffered a bit in terms of her emotions - especially after sending Brock through the entire spectrum of emotions.

This was such a non-steamy book compared to Robert's other books. Don't get me wrong, there is explicit sex in this book. But I know Robert's books, and they are usually much steamier. This book only had one sex scene that I thought was kind of steamy, and the other one fell flat. The chemistry was hot but the sex scenes weren't. I know Robert can do better. And this was one of her older books, so I know she has done better since. But this book could have used a little more steam - especially since it seemed like Robert was trying to work the hate-to-love bickering romance.

Of Robert's books that I've read (this is my tenth), I'd not recommend this one. I'd recommend her O'Malley's series, her Out of Uniform series, her Foolproof Love series. But maybe not this one. The heroine was a little too unlikable overall, especially to be paired with such a sweet guy like Brock.

3.5 stars -> rounded down to 3 stars. I liked this one but wouldn't recommend it, and probably won't reread it (it wasn't that memorable). Still, it was worth reading and I'm glad I did. I love Robert's books and will always give them a chance! And this Wedding Dare series is wonderful.