Review: Looking Inside by Beth Kery 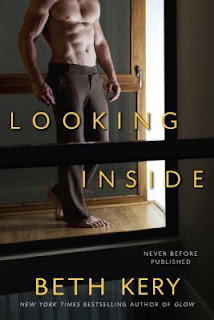 Are you just going to stand there and watch?

Eleanor Briggs just can’t help herself. Every night, the sight of the man in the high-rise across the street is driving her wild. She longs to feel his touch up close and personal. To win him over, she’ll need to shake off her wallflower sensibilities and become the seductress she never imagined she could be. The only trouble will be finding the perfect way to meet him…

Or are you going to join in?

Sex is easy for millionaire entrepreneur Trey Riordan. Finding something of substance, however, seems impossible. That is until a simple night of reading at a local coffee shop becomes something far steamier when a beautiful brunette comes by and leaves a note telling him to look out his bedroom window at midnight. But when the time comes, neither of them will be truly ready for what follows…

This book was simply stunning, and took me by surprise. I decided to read it on a whim - I wanted to read something really steamy, but new and fresh. I've not read any of this author's books, and none of my blogger and reader friends have read this book, so I figured this would be the perfect one to read. Thank you, Berkley, for the opportunity!

For about a year, Eleanor has watched the man living in the high-rise across the street. She's seen him having sex six of seven times, and each time, it's like he's right there doing those things to her. But he has no idea that she's seen him. One day, she decides to take matters into her own hands and go for it. When she sees his name on a list for a local coffee shop reading, what's a girl got to do but dress like she's doing to a club, and bring a sexy BDSM novel with her? She's got his attention now... and there is nothing stopping the blazing inferno of chemistry between them.

I had no expectations and I knew very little about this book, before reading it. There are so few reviews on Goodreads at the moment (as of September 29th, 2016), which was great! I went in blind and sometimes I absolutely love that feeling. I wanted to read a super hot romance novel that didn't have a lot of buzz behind it (yet), and I found one (and loved it).

Eleanor works at a museum, as a special collections person. She loves books and has a relatively boring life... until four months ago, when her sister died. Eleanor has been living in her sister's condo for over a year; ever since her sister died four months ago, Eleanor has been trying to fulfill her sister's dying wish - live more. Eleanor is the bookish type of girl, but she wants to be more confident and sexy. Seducing Trey Riordan, the man in the high rise across the street, is exactly what she wants to do. I like that Eleanor is terrified of making such a big move, but she does it. She isn't fearless and bold, but she does a bold thing (and then another, and another) to get Trey's attention, and she doesn't regret it because it makes her feel powerful. Eleanor and her parents are still grieving over her sister's death, but Eleanor is a strong woman.

Trey... Trey is so swoony. He likes women and he likes sex, but his last couple of relationships have gone terribly. His last girlfriend poked holes in his condoms! Trey can't stand lies or dishonesty, and he tells Eleanor upfront that this can only be sex. Trey wants honesty first, and no deception. He's a sweet guy, very intelligent and very successful (I'm thinking he's a millionaire, with the company he has, but money is not mentioned as much in this book - good!). Another thing - Trey is a dominant, and he's confident, and he has alpha traits (with being a d**k).

The development of the relationship was really well-written too. Yes, the steamy stuff was off the charts, and the pair has great chemistry. Insta-lust is totally cool with me. But I thought the author did a wonderful job of gradually having these two fall in love. It was sweet!

And then there are the "heavy" issues of the book, like Eleanor's sister's death. Honestly the heavy stuff really didn't weigh down the story. I liked seeing Trey and Eleanor get closer over some of those issues. It took Eleanor quite some time to tell Trey about her sister, but I like how understanding Trey is. Trey never leaves Eleanor's side despite Eleanor jumping to some crazy conclusions (more than once), or her not being totally honest with him (about her job, her sister, etc.).

So in general... I'm half in love with Trey (I wish someone like him existed in real life), and I really liked and admired Eleanor. The chemistry was incredible, and the romance was sweet. The climax has a spot of drama, but not enough to be off-putting. The person in the wrong apologized, and the person wronged never gave up on the other. It was a beautiful ending!

I can't think of anything that would deter me from recommending the book - though I will say that I wanted to see some of Trey's "tough issues", and not just Eleanor's. I think the focus of the tough issues were on Eleanor and her sister's death, but I would have loved to see Trey lean on Eleanor (Eleanor leaned on Trey so many times in this book).

And the climax? As minimal as it was in terms of drama, it felt a tiny bit random. You'll see what I mean if you read the book. Eleanor flips out over this random thing... the thing itself is random, like the author couldn't figure out what to make the straw that breaks the camel's back, and so she just threw something in there... it was weird. No foreshadowing whatsoever.

Don't get me wrong, I don't think this detracted from the story or quality of the story. But it was weird, and worth mentioning!

4.5 stars. I hesitate to round down. This book was honestly so good, and I'm glad I picked it up on a whim. I don't see room for a series of companion novels, and I'm hoping that Trey and Eleanor's happily ever after is cemented, so this is a great standalone novel. I recommend it, and I will definitely be looking out for other books by this author in the future!