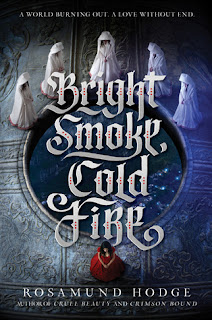 Both pairs will find friendship where they least expect it. Both will find that Viyara holds more secrets and dangers than anyone ever expected. And outside the walls, death is waiting. . . .

I think I liked this book, but maybe there were just too many little things that I didn't love. I did think that it's an amazing and very creative retelling of Romeo and Juliet, but parts of the story were not to my liking. That being said, my somewhat low rating could be attributed to "it's not you it's me". You as a different reader might love this book!

The Ruining has come over the world for a hundred years. There is no place left on the earth with living humans except the city of Viyara. Mahyanai Romeo and Juliet Catresou are part of two families at odds. Juliet is the sword of the Catresou family, and she is set to have a Guardian to help her. That Guardian would be Tybalt, her cousin. When Romeo kills Tybalt Catresou, Juliet is supposed to avenge her family and kill Romeo, but she can't - she and Romeo are hopelessly in love. Instead, they marry in secret and begin the process to make Romeo Juliet's Guardian. But this goes terribly wrong, and Romeo finds himself bound to Paris of the Catresou clan, and he thinks Juliet is dead. But Juliet is brought back from the dead by Runajo of the Mahyanai, who is a Sister of Thorn, sworn to protect Viyara. Runajo finds that having the sword of the Catresou family bound to her is not as advantageous as she expected. Both pairs - Paris and Romeo, Runajo and Juliet - will work together to uncover truths about the Ruining, necromancers, and the two families. And both pairs will find that death is closer than they think.

I think the thing I really liked about this book was how incredibly unique it is, as a retelling of Romeo and Juliet. Hodge captures that original story, and then twists it up. You have a lovesick Romeo, who seems weak from love but truly is strong because of it. You have Juliet, who loves Romeo and dies for him, only to be brought back. There is Tybalt (though I'm still trying to figure out who Mercutio would be), and Runajo is actually Rosaline! But in this retelling, there are revenants and reapers and so much undead. I don't know what it is about the dead and undead that fascinates Hodge so much, but all of her stories seem to incorporate a lot of each.

This book is NOT written from Romeo's POV, or Juliet's. Instead, it's written from Runajo and Paris's alternating third-person POVs. At first I was a little thrown by this because obviously I was expecting Romeo and Juliet's alternating POV (or at least one of their POVs). But I actually really liked that this book was not told from Romeo and Juliet's POVs. It's cool because the story is not really romance-driven, and it's not romance-centered. With Romeo and Juliet not as narrators, the story is less focused on the romance and more focused on the families and the undead and revenge.

I thought Paris was okay, and Runajo was interesting. Both are interesting narrators to follow, though I didn't really *love* either of them. I thought Paris was kind of wimpy at times, and a bit mean to Romeo. Runajo is kickbutt and fearless, but I think those qualities alienated her and made her a little cold. She was tough as nails though, and very driven.

I like the relationships in this book. Romeo and Juliet are very in love, and they stay that way from start to finish (despite pretty much never interacting throughout the entire book - they each think the other is dead). Paris is very devoted to Juliet (as her would-be Guardian) and the Catresou family (at first). But Paris and Romeo become friends, which is fun. There is also another character, Vai, that develops a good relationship with Paris. THAT was fun to read - Vai is hilarious! Runajo and Juliet's friendship took a long time to develop, and I'm still not sold on Runajo, but I think she eventually stops seeing Juliet as a weapon and a slave, and more of a human.

I was never bored while reading this book, though I will say that I breezed through some of the longer passages that seemed to drag on and on. This happened... a lot. Still, the story was very intriguing and I couldn't stop reading. But in the end, I guess I felt a little meh.

I don't think I really connected with any of the characters. This could have been me, my preferences, my mood, I don't know. I didn't like Paris, I thought Runajo was okay but cold, and I feel like I really would have like Juliet but we never read from her perspective. Romeo was okay, and he grew on me towards the end of the story. But overall, none of the characters really called to me except Juliet, and maybe Vai. Vai is a fun character, but definitely meant to be more of a secondary character.

This story is twisted and kind of cruel and heartbreaking. While I think the author did a great job of writing this (clearly, if the intent was to break hearts and make readers despair), I didn't necessarily love reading this book, as I was reading. I felt SO bad for Romeo, and Juliet, and it hurt seeing them apart, and seeing them believe that the other was dead. And then, since each of them was bounded to someone else (Juliet to Runajo, Paris to Romeo), their free will was kind of taken away. Paris could command Romeo, and Runajo could command Runajo. THIS was hard to read, as it always is for me to read, when it comes to free will taken away. I hate it when compulsion is a huge factor in books. Runajo could have told Juliet to walk off a cliff. And Runajo commands Juliet to do some things... I don't know, guys. I know this is all part of the story, but it hurt to read.

I definitely wanted more explanation as to the Ruining, and why Viyara was the only city with living beings, and where all the revenants and such were coming from, and the necromancers too. Basically, the world-building was cool, and very dark and intense, but very little was explained. Of course, the author could be saving all of this juicy stuff for book two (I believe this is a duology). And she very briefly touches upon a potential explanation to one thing. But I wasn't really satisfied.

I know I said that I liked that we never get Juliet and Romeo's POVs, but that doesn't mean that I liked that they NEVER interacted in this book. There are three (or maybe four?) scenes from the past that feature Romeo and Juliet, but they are short scenes, and there are only those three (or four) in the entire book. I wanted to see Romeo and Juliet interact, gravitate, fight for each other WITH each other. Instead, for the entire duration of the book, Juliet believes that Romeo died, and Romeo believes that Juliet died. This is still not cleared up at the end of the book, despite both of them surviving from their attempt at making Romeo Juliet's Guardian. Talk about frustrating!

The story is slow. I'll be frank - I breezed through passages that didn't seem to add much to the story. Maybe they did (they probably didn't, in general), but there were a lot of paragraphs that seemed unnecessary. And the story barely moved at all, at first. It took me about, let's say one-third, of the story for me to really get into it, and even then, the story still moved somewhat slowly.

The ending features a huge cliffhanger, and it's not the nicest ending. We still have separation of key characters, and ignorance too, and there is something shocking that probably can't be "fixed" in book two. The ending is pretty surprising, and I'm definitely interested in reading the next book.

Ehhhhh. This story was a very different retelling of Romeo and Juliet, I'll give it that. The female characters are SO fierce, and the undead aspect is wacky, and all the secrets are intriguing. But I don't think this is a must-read book. If anything, I'd wait to binge-read the series (I think it's a duology). Or skip altogether - I'm not getting life-changing vibes from the story.

3.5 stars -> rounded down to 3 stars. I'm going to be slightly harsh with the rating simply because this just wasn't as great as I expected. The retelling aspects were really different and interesting, but little pieces of the story didn't fit well for me. It could be my mood! I just didn't find this story impressive. I really liked Cruel Beauty, but I didn't love Crimson Bound. This new book seems to be underwhelming, much like Crimson Bound was.