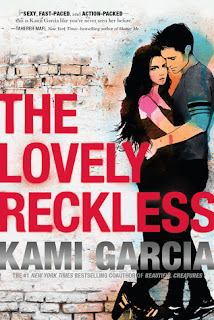 I’ve become an expert at avoiding things that could hurt me—which means I will figure out how to stay away from Marco Leone.

Seventeen-year-old Frankie Devereux would do anything to forget the past. Haunted by the memory of her boyfriend’s death, she lives her life by one dangerous rule: Nothing matters. At least, that’s what Frankie tells herself after a reckless mistake forces her to leave her privileged life in the Heights to move in with her dad—an undercover cop. She transfers to a public high school in the Downs, where fistfights don’t faze anyone and illegal street racing is more popular than football.

Marco Leone is the fastest street racer in the Downs. Tough, sexy, and hypnotic, he makes it impossible for Frankie to ignore him—and how he makes her feel. But the risks Marco takes for his family could have devastating consequences for them both. When Frankie discovers his secret, she has to make a choice. Will she let the pain of the past determine her future? Or will she risk what little she has left to follow her heart?

Confession time - I've not read any of Garcia's books. This is my first. I know she has several different series published, but none of them appealed to me. This book did, because it seemed like the kind of YA contemporary that I love, filled with romance and falling in love. There were those aspects, and so much more. I'm happy to say that I really liked this novel.

Frankie's boyfriend was killed recently, and she hasn't been able to fill that void. She has PTSD from what she saw (in terms of how he died), and she's been so different than she was before he died. One costly mistake and her mother sends her to live with her father. Frankie's dad is an undercover cop, living in the Downs (think of the Downs as a "rougher" part of town). Gone is Frankie's life in a trust-fund prep school. The teens at the Downs are more interested in cars, street races, and gambling. Marco Leone, a student at the high school, is a street racer, a tattooed, cocky boy who isn't afraid of a fight. He's exactly what old Frankie would avoid, but new Frankie finds him irresistible. But his secrets could cost Frankie everything. Is he worth it?

This contemporary novel reminded me of Katie McGarry's books. I've seen it compared to Simone Elkeles's books too, but I haven't read enough of her books to draw that comparison. McGarry's books are hit or miss for me, but I liked some of them and I liked Garcia's. We have the rich girl fallen from grace (so to speak), and a rough and tumble boy from the wrong side of town. I really like this trope.

Frankie has so much going on in her life - her boyfriend was killed in front of her, her mother is practically an emotionless robot, her stepfather is a royal pain in the butt, her father is an overbearing, overprotective cop. In the beginning, it seems like Frankie has given up on herself - she doesn't care about piano (she's really good and has played for years), or Stanford, or school. A DUI and being sent to live with her father and attend a public high school while doing community service? Frankie welcomes the change.

She meets Marco on her first day. Marco seems off-limits in a rough, bad-boy way. He has tattoos and a cocky, confident air about him. He loves cars and has a hint of danger around him. But Frankie begins to peel back Marco's layers. He takes care of his little sister, who was badly hurt years ago. He street races for reasons that have to do with awful circumstances that aren't his fault. Marco was once a genius AP student, not a boy who gets suspended for fighting and illegally street races. Marco is a good person, a sensitive and swoony and romantic guy, and I liked him a lot.

It seemed like every single character in this book had their own "tough issues" to deal with. I already talked about Frankie, and Marco. Lex, Frankie's friend, has a rich mother who is never around except to go to charity galas and publicity events. Abel, another friend of Frankie's, is the son of a rock star who committed suicide fairly recently. Marco's sister Sofia was in a terrible car accident years ago. Marco and Sofia's father is in jail, their mother dead from cancer. There was so much going on in terms of "tough issues", with every character. Sometimes it was a little overwhelming. But it was interesting to see how these events shaped each character.

This book is definitely about Frankie's healing, putting herself back together after Noah's death. She and Noah knew each other since they were little. They were dating, but their love wasn't the attraction love, like she felt for Marco. Frankie learns a lot about herself, and overcomes much.

The romance! So sweet. Generally, YA contemporary isn't my thing, unless there is a lot of romance. This book had a lot of swoony moments. I loved Marco, and I really connected with Frankie. Frankie and I are very different, yet I could connect with her easily. These two are fire together! Chemistry right from the start, and lots of good build-up. I see other readers complaining about insta-love, and I get it. I thought the I-love-you's were thrown out there pretty quickly. But I also loved the romance, so maybe I was able to look past that.

The climax is a bit scary, and nail-biting-worthy! There is no easy way out, for Marco, and therefore, for Frankie. I think Garcia did the ending justice. It's a happy ending, but there is a touch of bittersweetness to it (let's pretend that's a word). It's a satisfying ending though, with many questions answered. I would read companion books if this were a series!

I can see why some people are complaining about insta-love. Chemistry and insta-lust, I understand and don't mind. Insta-love... it's definitely a thing in this book. But I liked the progression of the romance, at the same time.

I don't really have any other complaints, beyond that one! And that one isn't really that major.

This book is definitely for fans of Katie McGarry, and probably Simone Elkeles! I've read many of McGarry's books and while some didn't work for me, a few did, so I feel good about comparing this book for McGarry's books. I love the rich, innocent girl meets cocky, bad boy trope, and it really works in this story.

4 stars. This is a sweet and yet heartbreaking story! I would love to read companion novels about secondary characters, especially since several characters' stories went unresolved (in my opinion). Well done on your contemporary debut, Garcia!