Review: Tell Me You Need Me by Joya Ryan and Once Upon a Power Play by Jennifer Bonds 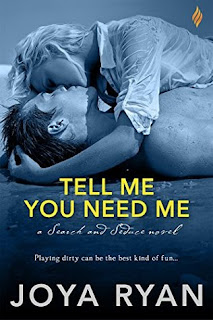 Tell Me You Need Me by Joya Ryan
Book One of the Search and Seduce series
Publisher: Brazen
Publication Date: November 16, 2015
Rating: 3 stars
Source: eARC from NetGalley

Playing dirty can be the best kind of fun…

Chloe Franklin wouldn't call herself a commitment-phobe, so much as she's allergic to anything long term. She loves the sexy, sweaty and intensely hot hours of the night that come before the sun rises, though. Especially when those nights are spent with Search-and-Rescuer Gage McGraw...

Gage loves his job, but there is one thing he's starting to like more than the rush of a mission--a stacked blonde with a mouth that haunts his dreams. Every time he steps foot in the sleepy town of Beaufort, he hooks up with Chloe. But he's tired of hooks-ups. He wants more.

Just the sight of Gage gets Chloe's blood going. Hot, bothered, and finally naked, she's ready for their night to start. But before he takes her, he whispers what his intentions really are…and then the games really begin.

This book and the next book I'll be reviewing (Once Upon a Power Play by Jennifer Bonds) both feature a woman named Chloe, and both Chloe's are commitment phobes and don't want to shack up with the respective man they've come to enjoy spending time with (physically). In this book, Chloe and Gage have known each other for years; he visits a weekend at a time, and he and Chloe hook up, and then he leaves. Both are always anticipating the next time he comes. But Gage might be looking into a more permanent position in Beaufort, and he wants Chloe to go steady with him. But Chloe doesn't want anything permanent, and Gage isn't even sure he wants to stay in the town permanently. But neither of them are going to give up what they currently have.

The first scene in the book took me by surprise, because I had no idea that Chloe and Gage already knew each other (I didn't read the synopsis well enough, I think). I was like... why is she about to hook up with someone who uses THOSE lines?! But they already knew each other. Nevertheless, the first scene is SO hot. Right from the start, we get to see what type of relationship Chloe and Gage have - purely physical, no emotional strings attached.

I really liked Gage; he's a Search-and-Rescuer, and he is currently in between rescues. He's teaching young search-and-rescuers the tricks of the trade in the forest in Beaufort. Gage would never consider settling down in Beaufort (or anywhere), but after a near-death experience, he's decided that he wants Chloe in his life, permanently. Gage is an honest, noble, hot guy, and I liked him.

Chloe was a little harder for me to like because she kept pushing away Gage. She knew she wanted him but didn't want any more from him than a physical relationship. Yet she had feelings for him. I hate this type of confusion, it hurts people unnecessarily! Still, Chloe is a strong type of woman, despite not really knowing what she wants. She's dedicated to her mother's restaurant, and it's really amazing to see how committed she is to see it flourish, after her mother's death.

The pair are good together, especially physically. I didn't feel as much of a connection as I had wanted (maybe because they already knew each other?), and I wish I liked Chloe more, but they definitely had good chemistry. Good, but not really hot, like I was expecting. I've not read any of Joya Ryan's books, but I'd heard that her books were SUPER hot. This book was hot but not really hot, if that makes sense.

Overall, my opinion of this one is fairly positive, despite the three-star rating. I liked it but didn't love. See below for my (vague) dislikes.

I already stated that I had a hard time liking Chloe. Unfortunately, I didn't like her indecisiveness, and when she made a decision, I still didn't like her. There was a scene in which she finally decided she wanted more from Gage, only to then back out. I'm not really a fan of the way Chloe thinks. It's totally okay to not be sure of what you want; but to string someone along in the process is cruel.

This book wasn't as hot as I'd expected! Maybe my expectations were too high. I'd heard how hot Joya Ryan's books were, but this book didn't see *that* hot? Maybe I'm too demanding. Ha!

I didn't quite feel the emotional connection that these two had, though this could just be me. They had decent chemistry, and the steamy scenes were hot (better than okay but not smokin', if that makes sense). But I didn't quite catch their emotional connection as the book went on - which was sad, because that's basically what this book was about. They already had a great preexisting physical relationship, and this book went through their emotional relationship.

The ending felt a bit neat, which is okay in Brazen books, but doesn't stop me from wanting more! I'm not a fan of the man being the only one to work for the relationship, and the woman not doing anything. I don't really care if that view isn't seen as "feminist" - if you mess up, or even if you just really want to be with the person, you should also be invested in working things out. Grand gestures by the man shouldn't JUST be by the man.

3 stars. Not terrible, but not impressive, either. I might try one of Joya Ryan's other Brazen novels, but this one didn't really do much for me. My next review, for Once Upon a Power Play by Jennifer Bonds, is one in which I highly recommend that novel! 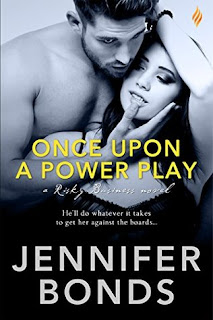 The first book in this series, Once Upon a Dare, probably wouldn't have appealed to me, based on the synopsis. I've not read the book, but I read the synopsis, and it sounds like something I've seen before several times. THIS BOOK THOUGH. Sports romance? From Brazen? Yes, please. I am a huge sports fan - especially when it comes to hockey. Hockey players make for great male protagonists!

When Chloe's date cancels on her, she knows she isn't going to waste the evening she spent preparing for the date - with her new gold dress and high heels. What she doesn't expect is to meet a sexy stranger at the nearby grocery store, who infuriates her and turns her on. Ryan is a professional hockey player, and a good one, despite his months of recovery from an injury. One steamy night leads to another which leads to another; Ryan wants to settle, but will Chloe put aside her past experiences with men and give Ryan a chance?

RYAN DOUGLAS. Get ready to fan yourselves, ladies. Ryan is sexy and swoony and steamy and clever. He absolutely loves his job, the sport, and it's his life. He also enjoys bickering with Chloe, and he goes after her, and what he wants. I really like his alpha-male-ness, and his decisiveness. Underneath the teasing and the testosterone, he is a really good guy. Seriously. He's probably one of my favorite Brazen males.

Chloe is very, very sassy, which is hilarious. When she and Ryan meet in the grocery, she sasses him from the start, angry at him for taking the last lime. She doesn't like being saved, she doesn't like attachments, and she doesn't like how much she wants him, but who is she to deny herself something she wants? For the most part, I liked Chloe a lot.

The pair are really great together; they bicker and clash a lot, and their interactions are always hilarious or steamy. I really enjoyed the romance, outside of the chemistry. The two have serious combustible chemistry, but they also have a great connection. It takes Chloe a bit to really see that she is happy with Ryan. But they are hot together and sweet together!

Like I said before, I loved the sports aspect of this book. I'm a huge sports fan, and I love hockey, so I was really pleased when so much of this book revolved around hockey. Ryan is a professional hockey player (hello, giant hot male!), and Chloe is working in the advertising of the hockey rink/stadium. Hockey is definitely a sport that should be featured in more romances, because the males are some of the hottest (beard or no beard)!

Overall, I absolutely loved this book. It's definitely a Brazen favorite, which is a pretty elusive spot for me (since I read so many Brazen novels, and I usually enjoy them).

The ending is VERY happy, but I wished for a little more initiative from Chloe. That's all I'll say - I just wish it was less one-sided, things in the end. Ryan is SUCH a good guy! Chloe... well, she needed to work for the relationship like Ryan did. If you catch my drift. Anyway, I liked the ending, despite this one-sided-ness.

I soooo recommend this Brazen novel, if you're a fan of Brazen novels. Even if you're not, if you like adult contemporary romance, or adult romance in general, I recommend this one. It's a fast read despite its somewhat denseness in emotional content. This will be a go-to Brazen recommendation in the future!

4.5 stars -> rounded up to 5 stars (you don't see this from me every day). I almost want to read the first book now (we do see the starring couple in this book several times), and I will definitely be looking out for future books in this series!