Promo and Giveaway: The Falling Kingdoms series by Morgan Rhodes

Hey lovely people! Today, I'm promoting the Falling Kingdoms series by Morgan Rhodes. An epic fantasy series with stunning world-building, these books are sure to hold you captivated. While I've not read any of the books (I'm planning on binge-reading the series, once all six are published!), I am quite sure that the series is as fabulous as it sounds.

In celebration of the upcoming publication of the fourth book, Frozen Tides, Penguin Teen has a neat promotion. I'm going to feature the fictional kingdom that I would love to rule over. I bet most of you all can guess - but if you can't, you'll know soon enough! Can YOU think of what fictional kingdom you'd want to conquer, or live in? The world of Throne of Glass? The Martial Empire of An Ember in the Ashes? The bustling city of Kettardam in Six of Crows? Let me know in the comments!

For those of you who know me... it will come to you as no surprise that I would choose to live in - and rule - King City, of the Dells, the setting of Fire by Kristin Cashore. 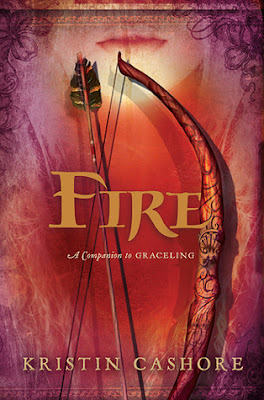 To be honest, I'd want to live basically anywhere in the Seven Kingdoms, or the Dells. Wester, the Middluns, Roen, Lienid - maybe not Monsea or Gentian though. I chose King City specifically because I'd want to be the Queen of the Dells realm so... a Queen needs to live the capital city.

Below are the two maps from Kristin's blog. 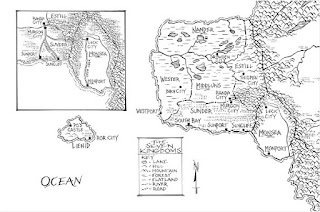 The Seven Kingdoms (setting of Graceling). 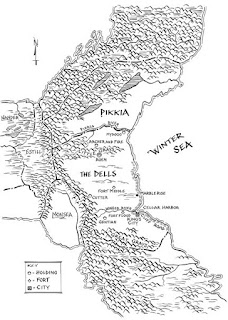 The Dells and Pikkia (setting of Fire).

High fantasy settings and world-building are my favorite - so incredibly creative and unique and fantastical. Cashore's worlds are beautiful and breathtaking, but also very dangerous and so real, in some ways. I'd love to wield and sword and ride a horse and shoot a bow though. The more "glamorous" aspects of fantasy, maybe, but some of my favorites!

Check out the Falling Kingdoms series!

CLEO: Reeling after a bloody showdown in Limeros ending with Amara’s abduction of the water crystal, and a vacancy in the Mytican throne, Princess Cleo must cast aside her feelings and look toward her kingdom with the eyes of a Queen.

MAGNUS: With the kingdom in chaos, Princess Lucia still missing and quite possibly in danger, and a shocking realization about Cleo, the steely prince is once again torn between love and duty, leaving him wondering whether he’s strong enough to rule his people.

LUCIA: The young sorcercess has had her vengeance after the cruel death of her first and only love. Heartbroken and unable to trust anyone, she allies with the awoken Fire god, who also seeks revenge.

JONAS: After escaping death by the skin of his teeth, the defeated rebel—along with a mysterious stranger–leader reunites with Princess Cleo, only to find himself a mere pawn in a dangerous hunt for the elusive Kindred.

KING GAIUS: Abandoned by Melenia and betrayed by his own children, Gaius flees Mytica and sails to Kraeshia, where he attempts to ally with the famously brutal emperor across the Silver Sea.


Connect with the author online!