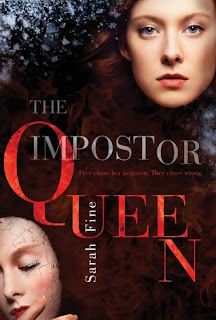 Let me tell you all about the state of PANIC that I was in when I finished this book. At this present moment, Goodreads has this book listed as a standalone (no information about a sequel or anything) So I freaked out because there is NO way the book could end the way it did and NOT have at least one book to follow. Thank goodness for Publishers Weekly Rights Report - I dug up the one from the week of November 3, 2014, which stated that there would be TWO books in this series. Win!

Elli is the Saadela, the girl who will succeed the Valtia of the Kupari when the magic leaves the Valtia and enters Elli. She's been made ready since she was a small child; when the time comes, the Valtia dies, and the magic leaves her... but it doesn't enter Elli. Elli is forced to leave the temple, and she flees to the outlands. A young man finds her almost dead, and takes her to a cavern full of thieves; strangely, a lot of them are wielders of fire, which is strange because any wielders are taken to the temple at a young age. The more Elli learns, the less certain she is of her life at the temple. One thing is for sure - the war is coming now, and Elli will play a decisive role.

I am a huge fan of Sarah Fine's books - I've read ten of her eleven published books (Burn is the odd one out, but I have it for review!). This is book ten for me, and I absolutely loved it. The ending is satisfying but left me wanting so much more (as did book one of her other YA duology - Of Metal and Wishes).

Elli is ignorant and naive at the beginning of this story - she has no idea what the true nature of anyone around her. She is wrapped up in the love of the Valtia, and her handmaiden, Mim. She has people who care about her, and she likes her life. When the Valtia dies, Elli is devastated, and when the magic doesn't enter Elli, she is crushed. She ends up half-dead in the outlands, and a young man helps her. I LOVE Elli's determination to learn the skills she never knew - for example, dressing herself by herself. Elli doesn't ever stop trying to learn, to do more, to earn her keep.

Oskar, the young man who takes her in to his family (his mother Maarika, and little sister, Freya). is stern and compassionate and almost withdrawn. Everyone in the cavern has their secrets, and Oskar is no exception. Elli has her own too. Oskar struggles with his, and Elli wants to help him in any way she can. He's distant, but she never stops trying to help those who are helping her.

As always, Sarah Fine does an amazing job with the characterization of the protagonists and secondary characters. Elli really grew on me (I wasn't sure what to think of her at first), and I loved Oskar from the moment we meet him. Maarika and Freya are easy to like in their own ways. Sig, a young man and former friend of Oskar's, is hot-tempered and difficult to handle, but even he is such a well-constructed character. The "villains", whom I will not disclose, are malicious but we can see why they are the way they are.

I love the world-building of this fantasy novel. The idea of a Valtia (queen who has both ice and fire magic) and a Saadela (empty vessel who will be filled with that power when the current Valtia dies) is an interesting one, fairly original and definitely intriguing. I loved the setting of the outlands the most - it's like Iceland or one of those gorgeous wintry European countries (check out the character names, too!). When the secrets and prophecies and magic unravel, everything starts to make sense. I really like how the magic unfolds in this book, and how big a role it plays.

There is romance! The author had me guessing for a part of the book because I was sure that Elli would fall for this boy in the temple, but it was way too early in the book. You can probably already tell - the love interest is Oskar, and we are introduced to him in the outlands. As soon as he emerges in the story, you KNOW he's the love interest. I like him a lot! He's like a lumberjack. The romance doesn't start as soon as they meet - it's a slow-burn romance, the kind that Fine is really good at writing. I love the romance! No love triangle.

The ending isn't a cliffhanger (not really), but it isn't quite wrapped up, and there is so much more to be discovered in the next book. I wish for a smidgen more of a happy ending in some areas, but then, other areas are happy ish. Basically I want the sequel. Which is also the conclusion novel. I want it!

Ehhh. I can't think of anything specific that comes to mind. Maybe more romantic scenes. There were a good amount, and given that Elli was raised like a nun, I understand why Fine held back a bit. Perhaps there will be more in book two (but I doubt it, given something that the author told me about the setup of book two). Still, this book was great! It's getting four stars not because of anything "bad", but because it doesn't feel quite like a five-star read.

I sooo recommend this novel to any fantasy lover out there! Also anyone who loves a swoony slow-burn romance. Oskar is probably everything I like in a guy (minus the beard, I hate beards. Stubble, maybe). An epic story that will continue in 2017 - don't miss it!

4.5 stars -> rounded down to 4 stars (maybe I'm still a tad bit mopey over the ending). No cliffhanger but... the sequel couldn't come fast enough!