Review: Say You're Mine by Diane Alberts 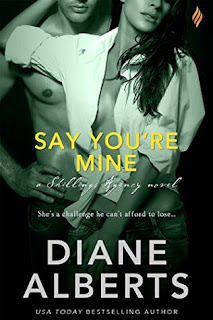 This book was a really fast read! There wasn't much to it, in terms of action, but this book was character-driven. I loved seeing Lauren and Steven work through their changing relationship. I'm not used to stories that are SO character-driven, but I liked this change of pace!

Steven and Lauren have been best friends since they were in elementary school. 20+ years later, Steven watches as Lauren goes from one awful boyfriend to another, and Lauren watches Steven drink himself to oblivion and go through women as often as he drinks. A Navy SEAL, Steven almost died in combat, and wants to wash away the disastrous mission that lost him his squad. Lauren has been in love with Steven, but she thinks Steven doesn't notice her. One night, things heat up and explode between them, leaving the next day awkward (as one would expect). But Steven isn't ready to go back to "normal" with Lauren - and Lauren isn't ready for Steven to break her heart.

I adore best friend romances, in which a guy and girl have been friends for forever, and perhaps one of them is in love with the other, but the relationship is totally platonic because that one friend is in the friend-zone, and the other friend either a) feels attraction but doesn't say anything, or b) really just does NOT notice the other person (which is usually the clueless male). Steven is semi-clueless in this instance, because while he HAS fantasized about him and Lauren, he knows better than to act on it and ruin this friendship. Lauren, on the other hand, has feelings for Steven, and he's "ruined" men for her. She dates a**holes but all she wants is Steven (which is weird logic).

Lauren is adorable! And such a nurturer. She's kind and smart and selfless, but she's also very playful and embraces her sexuality. Not to say that she is some brazen sex goddess BUT, she isn't afraid to ask for what she wants. Which is how she and Steven end up crossing the friend line.

Steven (I hate that name, by the way) is the tortured hero. His team of Navy SEALs died while he was only injured in the shoulder. He constantly wants to wash away the pain by drinking heavily and having lots of sex. Unfortunately for him, his two best friends, Holt and Lauren, and his sister, Lydia (who is with Holt) won't let him keep up his downward-spiraling ways. Steven is actually a really good friend and a half-decent guy when he isn't saying how terrible of a person he is. He puts himself down and then hides behind the a**hole act, but it isn't fooling Lauren.

I LOVE seeing the two of them together. They're so comfortable together as friends, and they are really good together sexually. Lauren poked the sleeping bear and something ignited between the two of them. Their chemistry is pretty hot! The steamy scenes were too - there was one scene in a restaurant where Steven's overprotective jealous streak was HILARIOUS to me (although, if I had been in Lauren's place, I probably would have been angry, not amused like I am as a bystander). There is a lot of passion between these two!

But their relationship undergoes a lot of emotional changes as well as physical, and I liked seeming them develop this new layer to their friendship. I love seeing friends become more than friends, beyond friends, and then beyond friends with benefits. Alberts did an excellent job with both the character development and the relationship development.

The climax - FOR ONCE, I actually really enjoyed "the breakup as a climax" trope. Steven gets upset with Lauren, things blow up, but I actually love the drama that ensued. It was quiet drama between the two, and NO ONE was playing any games. There was no miscommunication. One person said leave, the other left. One person begged forgiveness, the other said no, you told me to leave. No games! No miscommunication. And yet, the ending was VERY satisfying and happy.

This book was fairly short, with little going on in terms of action story, but a really developed story with great depth, in terms of the character arcs. I haven't read any of the other books in this series (there are four previous!), but I am definitely considering reading them now!

Not enough steamy scenes, and not enough "action" scenes. When I say "action", I mean events, going out, interactions. There is a lot of thinking and talking in this book. Not a terrible thing, especially when the book is so character-driven. But the story definitely could have had another well-written steamy scene (or two or three!).

I enjoyed the story, so I recommend this one! It's one of the few Brazen novels that I've really enjoyed in the past couple of months (definitely see Once Upon a Power Play by Jennifer Bonds!). I really liked how character-driven this book was (though I think the story could have benefited from another steamy scene!).

4 stars. I'd not read anything by Alberts besides this book, but I am intrigued! Hopefully there will be another book, about Daisy and Mark! *crosses fingers*