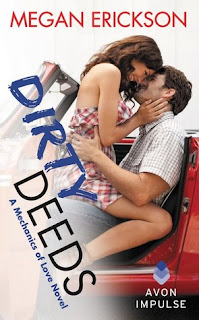 Alex Dawn is saying no to men. No to bad relationships, disappointments, and smooth-talkers. Focusing on her family and her job at Payton and Sons Automotive keeps her mind occupied and her heart content. She doesn’t really miss a man’s touch, until one night, a man shows up with the body of a god and a voice from her dirtiest dreams.

L.M. Spencer is only in Tory, Maryland, to scope out the town as a possible site for one of his company's hotels. The British businessman didn’t expect his car to break down or to find the hottest little American he’s ever seen holding a tire iron, piercing him with bright blue eyes.

They agree to one hot night, one dirty deed to burn out the chemistry between them. But from their first kiss, Alex can’t stop saying yes to this man. And when Spencer’s company threatens everything she cares about, they must make the choice to stand together or apart.

I was slightly nervous about this book before starting it - I LOVED Dirty Thoughts, but didn't quite love Dirty Talk as much as I'd hoped. It was still good (a three-star read), but I worried that Dirty Deeds would follow the decline. Thankfully, it didn't really slump, and I enjoyed Spencer and Alex's story (for the most part)!

Spencer is in Tory, Maryland, doing his job - investigating the town to see if Royalty Suites should build a hotel there. He enjoys his job, his position, and his money. But when he meets Alex Dawn in Tory, he begins to think that maybe she was missing in his life. Alex is moving on from past life with her ex-boyfriend, and she knows better than to form attachments. But there is something about L.M. Spencer that she can't shake - if fact, he's all she can see. But he'll be leaving for New York and never coming back, and neither of them are willing to give up their current lives. Or will they?

Spencer is the new character in this series - he wasn't in Dirty Thoughts or Dirty Talk. He's a tall, broad, handsome, posh British guy with a wicked accent that even little Violet is obsessed with. Spencer is very refined and polished... and yet he's as dirty-talking and alpha as they come. Alex totally misjudges him, and she's surprised by the instant and unwavering chemistry between them. But what's more, Spencer is a thoughtful and sweet guy. He apologizes when he's wrong, he wants things to be clear, he likes to talk things out. Such a perfect guy, right?

Alex, on the other hand, doesn't like talking about feelings or anything deep. She doesn't want to get emotionally entangled with Spencer (but she does, her bad). Alex is a difficult girl with a sad past, and it's Spencer who indirectly lifts her to her feet, and she finds her way in this book. I love how tough Alex is, but I also love that she lets her walls down. For Spencer.

I love how Alex and Spencer's relationship unfolds; you'd think it'd be difficult to pull off, with Spencer in town for days at a time. He comes, leaves for New York, comes back, stays for a little longer than the first time. They agree to enjoy time together while he's in Tory, nothing more. But along the way, they both fall for each other.

The chemistry between these two was pretty hot! Somehow, this book didn't seem as hot as Erickson's other books that I've read, and I expected more. But there were several hot scenes in the book (though, unfortunately, nothing memorable). Alex and Spencer are definitely a great pair together, both physically and emotionally.

Overall, I enjoyed this book. It's not my favorite of the series, and there isn't much that makes it stick out to me. It seems a bit lackluster compared to Dirty Thoughts, but maybe it's just that I LOVED Dirty Thoughts so much.

This is a general thing, but it's SO cliche that a romance novel has to have a breakup as part of the climax. It's so typical, and so annoying. Spencer and Alex's breakup is something I saw coming, as well as the reason. I hate how the guy is always the one that has to grovel and beg and throw himself at her feet. I think Alex could have done something too! I get that it seems like it's usually "the guy's fault". But in this case, Alex was being a bit unfair.

And, like I've been saying, there wasn't a lot of memorable scenes or things going for this book. Sure, Spencer is a hot Brit. But the sex scenes weren't memorable (they were okay, pretty hot, but nothing special). Alex + Spencer weren't particularly special. Sure, I liked them, but their relationship wasn't powerful and beautiful or cute and adorable, or amazing and, well, memorable. The whole plot of this book is soooo cliche (girl with tortured past, guy with rough past - are we back to this?) - right down to the super cliche climax. And ending. Agghhhh.

Don't get me wrong. I loved that Spencer and Alex got a great ending, and I loved seeing them get together. But there was nothing that made this book special. Like, I would never reread this one (whereas I've reread Dirty Thoughts at least a few times already).

I'd recommend this book if you're a huge Megan Erickson fan (like myself), or if you love this series. If you're new to the series, I recommend Dirty Thoughts, but maybe stop there. Grumpy Cal is literally the BEST male protagonist of this series. Not to say that Brent and Spencer aren't - and not to say that Dirty Talk and Dirty Deeds weren't great. They just weren't... amazing. Or wonderful. Or special. Quit while you're ahead!

3 stars. I liked this book, but I doubt I'll ever reread it. It's not one I'd go on the streets recommending, either. I wish I loved it, but it wasn't anything special. My biggest problem was that it's just another cliche romance novel, with a hot British guy to make it slightly different. Unfortunately, that's not quite good enough for me! But that's *me*.