Review and Giveaway: The Dark Days Club by Alison Goodman 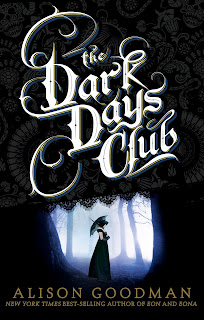 London, April 1812. On the eve of eighteen-year-old Lady Helen Wrexhall’s presentation to the queen, one of her family’s housemaids disappears-and Helen is drawn into the shadows of Regency London. There, she meets Lord Carlston, one of the few who can stop the perpetrators: a cabal of demons infiltrating every level of society. Dare she ask for his help, when his reputation is almost as black as his lingering eyes? And will her intelligence and headstrong curiosity wind up leading them into a death trap?

Whew! What a read! This book is a doozy - very long, but worth every page. I tucked in for a good read, and I got what I was looking for. I've been waiting for this book for nearly three years (according to Goodreads, anyway). I read Eon and Eona as a young teen (probably around fourteen, fifteen?), so reading The Dark Days Club was really exciting for me (I'm twenty now, random tidbit). Waiting for a new book by Alison Goodman has not been easy!

Lady Helen Wrexhall is about to make her debut at the royal court of George III, in front of the queen. Her aunt and uncle want her to secure a good future, and being presented and recognized by the queen will aid the process - and hopefully ward off the taint of Helen's mother's actions from the past. Lady Catherine was wild and unrestrained, and Helen's uncle is happy that Lady Catherine and her husband died years ago. But Helen is finding that she might be more like her mother than she thought. Her instincts have been getting sharper, and she's has been noticing odd things. It seems that the dangerous and mysterious Lord Carlston is the one who has answers, who knows what she is and what she is seeing. When worlds collide - the glittering world of Regency London, and the shadowy world of demons - Helen's life will never be the same.

The 1800s can be so restricting, especially in a YA novel with a female as the protagonist. Goodman really set up the world in an authentic manner; Helen's life must revolve around attending social events, balls, gowns, and securing a future match. Helen's uncle controls every aspect of her life, including her inheritance, until she either marries, or turns twenty-five. Scary thought, right? I didn't like Helen's uncle at all, and I thought her aunt was ridiculous (but she had good intentions). Helen's brother is SUCH a young lord in the 1800s (carefree, privileged, has no idea how lucky he is to have his freedom - freedom a young woman does not have in this time period). Same with his nice friend Selburn - he's nice, but I don't trust me. I did like Helen's friend Millicent, and Helen's maid Darby. Go Darby!

I really liked Helen - she's a different sort of character in YA. She's intelligent and curious and witty, which is not typical of a girl in the 1800s (they're not supposed to be smart - rather, they should be pretty, well-mannered dolls, ready for marriage and children). She IS well-mannered, and I'm sure she's pretty (Goodman never made physical appearance a big deal, which I thought was refreshing!). I like that Helen takes steps to protect herself, and her maid Darby, when she finds out what she is and what she can do. She doesn't immediately jump into the cause, which you see so many girls in YA lit do, when they find out that they're different.

So what IS Lady Helen? It turns out that her mother, Lady Catherine, was a demon hunter, with enhanced senses, instincts, reflexes, and the ability to see demons (with some aids). Helen is born with those abilities, and her powers are slowly awakening. Lord Carlston, an Earl, has recently come back to London - as it would turn out, to hunt demons, but also to seek out Helen.

Lord Carlston is known for supposedly killing his wife. No body was found, so this wasn't proven, but all of London is quite sure that he killed her. The young Earl is cold and seems savage, but it isn't until he shows Helen what SHE is that she understands why he is so. He's a Reclaimer as well, and he wants Helen to join him in taking demons' power to destroy them.

I like Lord Carlston. He's generally very misunderstood (poor guy) and seems like a good man. We don't get to know all of his secrets in this book, but we do get to see a lot of his personality. He protects Lady Helen at every turn, no matter her thoughts on The Dark Days Club (those who hunt the demons). Lady Helen is reluctant to join (which is so reasonable), and it's respectable that Lord Carlston does not push her.

I've seen some people asking if this book is similar to Susan Dennard's debut trilogy, but I personally don't think so. There are no zombies in this book, and I feel like Lady Helen's life is MUCH more rigid and restricted than Eleanor's. Lady Helen is a very high-ranking lady in society, with a hefty inheritance. Her brother is Lord Hayden, another noble, and he is good friends with a Duke, Selburn. Even Lord Carlston is an Earl. I don't really think that this book (and series) is similar to the Something Strange and Deadly series, especially given Lady Helen's reluctance to join the group.

There is a hint of romance, the smallest, barest hint. You can probably guess who the leading pair are. In 1800s London, unmarried eligible girls are often pushed towards the first interested nobleman, in order to secure a good match. Keep that in mind as you read this book. THERE IS NO LOVE TRIANGLE. I adored the beginnings of a romance in this book, and the ending is very favorable. I foresee no love triangle in the future, and I DO foresee the romance that I'm hoping will develop, developing. *swoons*

Spending of the ending... as soon as there is some grand ball or event or dance announced in YA lit, you KNOW something bad is going to happen. In contemporary YA, if there is a homecoming dance, or prom, something bad will go down. I knew the showdown was coming, but I didn't expect it to end as it did. I cannot wait to see what happens in book two! You just KNOW that Selburn is hiding something. And we've barely scratched the surface, in terms of Lord Carlston! I must know more!

Amazing world-building, excellent character arcs and development, unique story, budding romance - I'm hooked! This book doesn't end in a cliffhanger, but suffice it to say, I need the next book!

I absolutely loved this book - no surprise there, as I really love adult historical romance novels set in Regency London, and I adored Eon and Eona at a younger age. I had confidence in Goodman and she did not let me done! This is book one of a trilogy, so it isn't the worst idea to wait for all three books to publish. But I knew I would want a new Goodman book in my hands as soon as possible! If you're not much of a historical fiction reader, go slow! I was exposed to all of the customs and rules of Regency London because of all the adult historical romance novels I read.

4.5 stars -> rounded down to 4 stars (I bet if there were kissing in this book, it would have gotten 5 stars. LOL.). This book was very close to 5 stars, believe me. I am quite sure that the next book will not come soon enough!


USA residents: want another chance at winning an ARC? Enter the Goodreads giveaway!
Posted by Alyssa at 12:00 AM