Welcome to the blog tour for Compromising Her Position by Samanthe Beck! I absolutely adored one of Beck's earlier Brazen novels, Private Practice, and I'm happy to say that I enjoyed this one as well. Stick around for my review, an excerpt, and a giveaway! 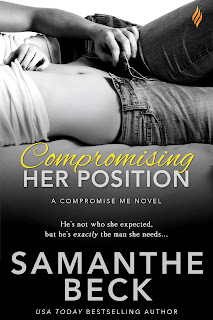 He's not who she expected, but he's exactly the man she needs…

When Chelsea Wayne drags Santa into a supply closet for a little office party nookie, she assumes the man in the suit is her on-again/off-again coworker boyfriend. Instead, it’s Rafe St. Sebastian, a man known for his hard-driving ways in business as well as the bedroom—and, kill her now, the brand spanking new owner of Las Ventanas—who grants her naughtiest Christmas wishes.

So much for her reputation, not to mention her career.

Rafe needs to close three acquisitions to prove to his father he’s ready to take the helm of St. Sebastian Enterprises. A hot interlude in a supply closet after deal number two seems like the perfect illicit Christmas bonus. Unfortunately, when that “bonus” becomes the key to the final deal, he finds himself back in bed—so to speak—with Chelsea, and after their steamy tryst, he’s not interested in keeping things professional…

This book had an... interesting start, which many Brazen novels do. I loved Beck's Private Practice, which was one of the first Brazen novels I'd ever read. I definitely trust Beck's romances, so I had a feeling I would enjoy this one. And I enjoyed it I did!

Chelsea's life is pretty put together - she works her butt off at her job, she has a steady boyfriend who works in the same company, and she loves her job. At the holiday party, she thought Paul (her boyfriend) finally consented to wearing the Santa costume, and she's so pleased, she drags Santa into the supply closet. But Santa is waaay too sexy, doing wicked things to her that she never thought Paul was capable of doing. Minutes after the closet encounter, she finds Santa and Paul in the same room... and finds out that Santa is none other than the new owner of the company she works for. Rafe St. Sebastian isn't going to take no for an answer, and no matter how far Chelsea runs from her previous life with Paul, she can't stay away from Rafe.

The first scene of this book was oh-so-hot. A little weird, because Chelsea doesn't even consider the fact that Santa might not be Paul. She put the Santa suit for Paul to pick up, but she knew he hated the idea of dressing up as Santa. So when she sees Santa, she is ridiculously happy that Paul dressed up - hence her spur-of-the-moment desire to jump him. But it's not him - and she doesn't find out while they're doing naughty things. Except that I'm 100% she knew it wasn't Paul after like, five seconds, because Paul is a boring business suit guy who has no passion or chemistry (sorry, Paul).

Rafe, on the other hand, phew, the man is hawt. He gets jumped by a woman in his newly acquired company, but he isn't going to say no, the way she threw herself at him. He didn't know that she thought he was someone else, not until she said "Bye, Paul" in the closet and left. Oops? Rafe is such an alpha, and a domineering leader one, at that. I personally really liked him, although I'm not sure if I would in real life (he is quite bossy and cocky!). But I seem to like the arrogant types... anyway, he's not a jacka**; he's hilarious and cheeky and a bit mischievous!

I wasn't sure what to think of Chelsea at first. She spontaneously decided to have sex in a closet, without checking to see if the guy was her boyfriend... I was a bit weirded out by this. Then her and Paul have an argument about something totally unrelated, and then Chelsea quits, and she gets a job far away. But she can't seem to avoid Rafe, and vice versa. I like that Chelsea took charge of her life and decided to explore new options - including Rafe. I liked her character development!

The chemistry between the pair is seriously explosive! Beck definitely has the steamy scenes of a sexy romance novel down, that's for sure. Each encounter between Rafe and Chelsea was hot, hot, and hotter. Their relationship slowly developed, although the time frame seems a bit short.

Overall, I found this Brazen novel to be a satisfying read. I've had a lot of ehhh "misses" in the past couple of rounds of Brazen reads (with the exception of one or two), but I really liked this one. If the first scene doesn't bother you by its oddity, then you will LOVE this book!

Read above (or the synopsis) about the opening scene. It didn't bother me at all (again, subconsciously she HAD to have known it wasn't Paul, and still went through with it). The scene didn't bother me much, but I'd like everyone to be aware that it might bother you!

Otherwise, meh, I don't really have complaints. It's a four-star read but not based on number of dislikes, only because it doesn't quite feel like a five-star read!


If you're a Brazen reader, definitely try this one (provided that you don't think the first scene would bother you). It didn't bother me (and I'm usually a picky one when it comes to steamy scenes with quirks). It's a reaaallllly hot Brazen read, with a fantastic male protagonist, a female protagonist who experiences good character development, and overall a great story!


4 stars. Samanthe Beck did not let me down! I can't wait to read more by her. This book is great for the holidays, folks! 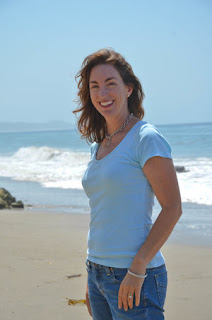 Wine lover, sleep fanatic, and USA Today Bestselling Author of sexy contemporary romance novels, Samanthe Beck lives in Malibu, California, with her long-suffering but extremely adorable husband and their turbo-son, Hud. Throw in a furry ninja named Kitty and Bebe the trash talking Chihuahua and you get the whole, chaotic picture.

When not clinging to sanity by her fingernails or dreaming up fun, fan-your-cheeks sexy ways to get her characters to happily-ever-afters, she searches for the perfect cabernet to pair with Ambien.

“There is nothing personal between us.”

“I beg to differ. In fact, I’m fairly certain I know your deepest, darkest secret.”

“I sincerely doubt that.”

He brought his mouth to her ear. “You knew I wasn’t Paul.”

“No.” The denial, though immediate, sounded slightly breathless, slightly desperate.

She had to have at least suspected, at some point. He refused to believe otherwise. “Not at first. But when I had you clinging to the tables, trembling so hard you could barely stand? You knew.”

“You-you’re delusional. If I’d realized you weren’t Paul, don’t you think I would have stopped you?”

“No. By the time you realized, you didn’t care.” The crowd around them erupted into a countdown.

Ten... He cupped her jaw in one hand... Nine... and slid the other down her back. Then lower. Eight... “You didn’t care about anything except my tongue tracing the path of your thong”—he let his fingers do the honor now—“all the way down until I could taste your sweet, throbbing little—”

“I thought you were Paul!” Her wide eyes darted to his, pupils huge.

Five... “Remember how you used your body to beg for more? There’s no f-ing way you’ve ever begged like that for Paul Barrington. No f-ing way. I could have you begging again.”

Her breathing came in quick, shallow pants. The hands she’d rested lightly on his shoulders tightened, bunching his jacket in a white-knuckled grip. She shook her head. “Not going to happen.”

Three... He was risking getting his face slapped in the middle of a dance floor on New Year’s Eve, but he didn’t care. For some inexcusable reason, he needed to know she wanted him, not Barrington.

Two... He spread his palm over the perfect curve of her ass and hauled her against him, so she’d feel just how well he remembered every damn detail of their last meeting.

“It’s not?” he challenged, and then crushed her lips under his.

Cheers of “Happy New Year” echoed around them over the strains of “Auld Lang Syne.” A flotilla of black and silver balloons sailed down from the ceiling. Guests laughed, and sang, and jostled them while he kissed her. Sparkly, star- shaped confetti rained over everyone and everything, and he kept right on kissing her. Her arms twined around his neck. Her lips parted. She flattened one hand against the back of his head and held on. When he bent her over his arm and swept his tongue into her soft, yielding mouth, she wrapped her leg around his hip. The heat of her body practically seared his thigh through his tuxedo pants.

He trapped her lower lip between his teeth and nibbled. There went his no biting promise, but her shuddery moan told him she didn’t mind.

The song ended. The house lights came up a few notches. He slowly drew her upright, and even more slowly relinquished her mouth. She stared up at him, dazed, her lips plumped from their kiss.

Giving her a grin he hoped didn’t reveal how much the move cost him, he walked away.