Review: How to Seduce a Scot by Christy English 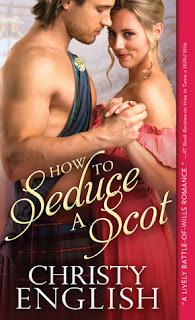 How to Seduce a Scot by Christy English
Book One of the Broadswords and Ballrooms series
Publisher: Sourcebooks Casablanca
Publication Date: December 1, 2015
Rating: 3 stars
Source: eARC from NetGalley

The plan is simple:
1. Descend from the Highlands to face the aggravation of a London Season;
2. Foist his wild sister off on some gullible English lord;
3. Retreat before the ladies of the scandalized ton can get any ideas.

Determined to see his hellion of a sister wed, Highlander Alexander Waters is willing to face anything—even the English. He just didn't expect his own rough manners to cause such a riot...or for a blooming English rose to catch his eye.

Gently bred Catherine Middlebrook must find a respectable man to marry or her family will be ruined. She won't allow herself to be distracted by Highland barbarians...no matter how her body may thrill whenever Alex is near.

Catherine wasn't part of the plan, but as their battle of wills escalates, Alex comes to realize this "proper" English girl is as wild as the Highlands themselves...and nothing will stop him from having her.

My rating is really 3.5 stars, more positive than it appears. I thought this book was cute! But maybe my expectations were too high. I LOVE Scottish romances - the Highlanders are special type of hunky, alpha males. But there were some things in this book that didn't quite work for me, and I didn't love this book as much as I'd wanted. Still, I think I'll be reading the next book (which I just got this week!).

Catherine Middlebrook needs to spend her one and only Season finding a husband - a rich one, at that. Her mother has spent all of the family's money, so Catherine and her twelve-year-old sister have to look out for her and themselves. They don't even have enough money for Catherine's first Season, so she better make the most of it. She's caught the eye of Lord Farleigh, who is kind and a lord, but he has nothing on the heat and intensity of the rich Scot, Alexander Waters. Alex and his older brother Robert have brought their little sister, Mary Elizabeth, to London to find her a husband. But it might not be the young Scot girl that will get married...

This book is so cute - if I were to describe it in one word, it would be "cute". It has a different tone than most other historical romance novels that I'm used to reading. While we are well aware of Catherine's plight and worry (in terms of her family's financial situation), we can't help but giggle at all the encounters between Alex and Catherine. They become interested in each other practically on spot, which surprises them both. Alex has no interest in the English, and Catherine has no interest in anyone who isn't a rich lord (the debts must be paid!).

Mary Elizabeth and Catherine become friends after the first ball at the beginning of the book, which is how Catherine and Alex are able to interact and get to know each other. Alex is actually a sweetheart and a gentleman, and Catherine is innocent and sweet, but she does not want to tangle with him because she has Lord Farleigh's interest, and she needs to marry - and marry well. I love how Catherine and Alex's romance is a bit forbidden, and they sneak around here and there.

I thought the romance wasn't steamy enough (see below), and I didn't like how Catherine kept pushing Alex away (though you really can understand why, with her goal of trying to marry a rich lord). I wanted the pace of the book to be faster, as well as there to be more depth, but overall, the book was a decent read.

Alex is a Scot, and I expected him to be this big, strapping, burly man with a Scottish brogue and a wicked, naughty side. He is all of those things, but I think the author held him back a bit. He didn't seem Scottish enough, to me! I wanted to see him be less of a gentleman, but he was so gentlemanly, for a Scot, one that hates the rules of the English. I loved Alex but he could have been much more!

The romance was a bit slow - and this is coming from me, who loves slow-burn romances. I think the author was trying to convey the emotional side of the relationship first, but I thought Alex and Catherine discovered that they loved the other rather quickly. Like, that realization, it dawned on each of them very fast. Of course, neither of them told the other until of the book, but still. The romance felt slow, but the realization was rushed.

And the chemistry! I felt like theoretically Catherine and Alex had great chemistry, but it was frustratingly little and slow throughout the book! I feel like they don't actually get their hands on each other until like, 45% of the book? That's a long time! And they do so little! Where are all the steamy scenes! Not just snippets of chemistry, but STEAMY?

Of the two of them, I liked Alex more. Catherine pushed him away, wasn't always straight with him, and she had this very misguided notion in her head that she couldn't marry him because he wasn't a rich English lord. The thing is, Alex is a rich Scottish lord (well, not a lord, but a rich Scottish gentleman), he loves her, and she loves him, so I never saw the problem. Oh, those English...

The very ending kind of bothered me a bit. Not the ending necessarily but the falling action. I can't say things specifically but I will say that I wasn't pleased by how quickly Alex forgave everything. I would still be pissed - but he literally fixes everything and sweeps her off her feet and la la la happy ending. I LOVE happy endings. I didn't like how dandy and smitten he was. Like, it's okay to be smitten, but for a great big alpha male Scot, he is too sweet. You don't hear that too often... me complaining about a guy being TOO sweet.

Anyway, this book was cute, but probably not one that I'd shout from the rooftops about (in either case, love or hate).

Ehh, I don't know if I'd recommend this one. I LOVE Scottish romances, but I think I wanted more Scotland, more steamy scenes, and more alpha male. This one is not bad, but not amazing. I could recommend a bevy of other Scottish/Highlander historical romances that are very satisfying!

3.5 stars -> rounded down to 3 stars. I am definitely going to read the next book (Robert for the win!) - here's hoping that at least part of it is set in Scotland! I don't think it will be, but a girl can dream.