Review: Love in the Time of Scandal by Caroline Linden 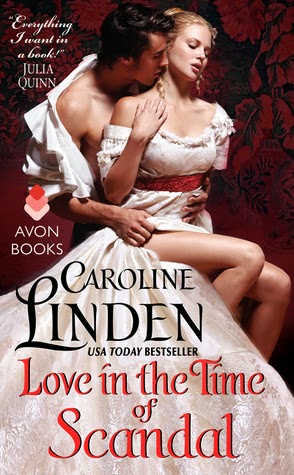 Penelope Weston does not like Benedict Lennox, Lord Atherton. He may be the suave and charming heir to an earl, as well as the most handsome man on earth, but she can't forget how he abandoned a friend in need—nor how he once courted her sister, Abigail. He's the last man she would ever marry. If only she didn't feel so attracted to the arrogant scoundrel...

Once upon a time, Benedict thought he and Penelope got along rather well. Though he needs a wealthy bride to escape his cruel father's control, spirited Penelope just doesn't suit his plans for a model marriage—until a good deed goes awry, and scandalous rumors link his name to Penelope's. She might not be the quiet, sensible wife he thought he wanted, but she is beautiful . . . beguiling . . . and far more passionate than he ever imagined. Can a marriage begun in scandal become a love match, too?

Gosh this series is amazing. Quite possibly in my top five historical romance series of all time! I love Caroline Linden and her books - she's definitely on my "auto-read" list. I admit, I've only read this Scandalous series by her, but I've read all three books and I've given all three book very high praise. You know you love the series when you can't even decide which book is your favorite! All three got the same rating from me!

I admit, I was a bit surprised when I saw that this would be Penelope and Benedict's book. I can't remember specifically Benedict or Penelope in book one, Love and Other Scandals, but it's been a year and a half since I read the book - I remember the primary couple's story (Tristan and Joan), and I LOVED it. I do remember Penelope very well in It Takes a Scandal - she's Abigail's sister, and she encourages Abigail to read the 50 Ways to Sin pamphlets, and to go in the forest with Mr. Vane (I looooooove Sebastian Vane, let it be known). While I liked Penelope, I didn't like Benedict in book two (It Takes a Scandal)! Hence my surprise when I saw the synopsis of this book months ago. However, this book was magical, and Linden did an EXCELLENT job of changing my opinion of Benedict completely.

Benedict needs to marry an heiress or a noblewoman with a significant dowry. His father is a cruel, hard man, and he is very particular. Benedict wants the money to distance himself from his father and his tight rein of control. Benedict has his sights set on a young lady Frances, but then a huge scandal occurs, and he finds himself offering marriage to none other than Penelope Weston. Penelope has despised Benedict ever since he treated Sebastian (his former best friend) so poorly. But she needs him in order to avert the scandal, and the more she's around him, the more she's reminded of the Benedict she first met, before she found out about what he did to Sebastian (remember, that was all in book two, It Takes a Scandal).

The big scandal is quite heartbreaking, in my opinion. Penelope is unmarried, not promised to anyone, and is very spirited in nature... and so when she is found in a bit of a compromising situation, and Benedict happens to be there as well, rumors go around that Penelope is a whore and a girl with loose morals. This will destroy her marriage prospects, even if she has a huge dowry. Benedict offers to marry her... but we both know that Benedict didn't have to offer, and Penelope didn't have to accept. Fate has a way to pushing two people towards each other.

When they met, earlier in the series, they got along quite well. I believe it was in It Takes a Scandal - Benedict seemed very suited for Penelope, and vice versa. But then Benedict didn't defend Sebastian, and Penelope cannot forgive him for that. But back to their relationship. It's obvious that they enjoy each other's company, before. In this book, they appear to despise each other, but there's a lot of buried passion and emotion wrap up in that hostility.

I love both of these characters. Penelope is more than feisty and spirited - she speaks her mind and asks too many questions and often doesn't know when to stop. This definitely leads to trouble at times, but it's also a quality that Benedict finds he really likes. He thought he wanted someone like Abigail - sweet and respectful and thoughtful - but he slowly realizes that he wants someone passionate and quick-witted and fierce.

I like Benedict. I think I like Sebastian better, but I understand Benedict more. He certainly has his own charm, and while he has a dark attitude to him, I like him. It definitely helps to know his past, his current situation with his father, and the way he protects everyone, especially his sisters. He's like an antihero, now redeemed.

The romance is lovely! Benedict and Penelope need time to grow to love each other, and to trust each other. The chemistry, on the other hand, has never been misplaced. Penelope is very, um, curious about things, especially given those pamphlets she's been reading (sooo glad those pamphlets are a part of this series). And Benedict is, well, Benedict.

There is an interesting story to this one, besides the scandal. It's tied with the scandal, and isn't resolved in this book (not quite), which makes me think there will be at least one more companion novel in the series? Penelope is protecting someone, and the person gets away from the blackmailer, but we don't know where Penelope's friend disappears to, so I'm thinking there has to be a book about Penelope's friend. At least, I hope.

I'm really pleased with this novel! This book is a companion novel in this series - remember, this entire series is a companion series, and each novel can be read by itself. But you should read all of this series (if you're interested), because it's an excellent series!

I can't think of anything off the top of my head - except maybe that last part I mentioned. If there ARE NOT any more novels in this series, then I kind of wanted more of a concrete ending to that subplot involving Penelope's friend. If there ARE more novels in this series (one, or more), then never mind. The thing is, I don't know, so I don't necessarily want this to be a dislike or a deal-breaker.

I totally would recommend this book! And series! Again, it's a companion novel, part of a series that can be read in any order, or one by itself. However, you would benefit by reading all of the novels, in order, not just because the series is amazing (it is!), but also because information builds as the series goes. Like, with this novel - secondary characters become protagonists. Information from the last book is used in this novel - though Linden does refresh quite a bit from the last novel when necessary. So either way, you can read this book and be fine! But I'd recommend reading the other ones too. They are definitely worth the time (and money)!

4 stars. An excellent addition to a wonderful series! I do hope there will be at least one more novel, featuring a certain character from this book - if only to know what happened to her after she fled! But also so she can get her own happy ending. I do love happy endings!