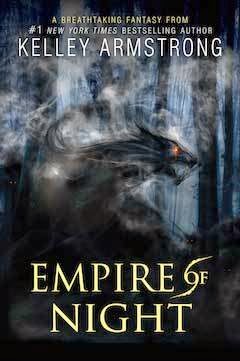 Guys, I almost don't want to write this review because LET ME CRY AND SUFFER IN PEACE, OKAY?! This one was soooo good. It was amazing and thrilling and heartbreaking and MY FEELS. They are broken. I hate when people talk about their "feels", but right now, it just fits. Sea of Shadows was excellent, and Empire of Night does its predecessor justice. Yes, Empire of Night didn't get five stars from me (like Sea of Shadows did), but that's mostly because of the cliffhanger ending. It's a great ending, but high on the heartbreak and cliffhangers. I did the same with the rating of The Winner's Crime - darn these heartbreaking-ending-sequel novels! Where is the third book, I need it!

Ashyn and Moria are almost-prisoners in the emperor's palace. They hate court life, but they must stay and gain allies and power if they want to find the children of Edgewood. An opportunity is given by the emperor for Moria and Prince Tyrus to rescue the children, and Ashyn comes too. So does Ronan, who basically told Ashyn that he didn't want anything more from the kiss they shared in Sea of Shadows. We all know this is not true, but Ronan is determined to leave Ashyn alone. And Gavril - Gavril has betrayed the empire (and Moria). Moria and Ashyn must find the children, and battle shadow stalkers and other creatures, and watch their backs in the midst of war.

In Sea of Shadows, I loved both Ashyn and Moria. Usually, when we have two female protagonists, I'll like one and dislike one. Not the case with this book. This book is broken into chunks of each girl's third-person perspectives (the girls aren't together all the time, so it's also like there are two separate plots). I think the author focused a smidge more on Moria in this book, but that might just be my perception of the book. I didn't mind at all.

Moria is the fierce warrior of the pair. She is fearless, and guards her heart. She and Gavril cared about each other, but weren't lovers. I had really hoped that they would be A Thing, but their "romance" in book one wasn't a huge thing... it almost wasn't a thing at all. So when Gavril betrays everyone, including Moria, Moria is hurt and angry, but she isn't heartbroken and devastated. She doesn't like mentioning his name though, so, there's that.

I really like the direction of Moria's story in this book. She actually falls for someone else, and it's a palatable, tangible relationship, not like her relationship with Gavril. This guy - Prince Tyrus - has a good heart and a kind soul. I like him a lot. He's brave yet cautious, determined and loyal, and a courageous warrior. He's a bastard prince, but a prince nonetheless. I might have been all OMG-NO-IS-THIS-A-LOVE-TRIANGLE, except that Gavril and Moria were barely A Thing in Sea of Shadows (I kept mentioning how subtle the romance was in that book), and they never did anything... you can tell that Moria genuinely loves Tyrus and vice versa. It's endearing, because Moria is very hardened.

Not like Ashyn. Ashyn is the softer of the two, the healer to her warrior sister. Both of them are fierce and unafraid and forces to be reckoned with, but Ashyn is an anchor, whereas Moria is a rock. Ronan straight-up tells Ashyn that he didn't want more from her, and he didn't want her to want more from him. This hurts Ashyn deeply, and she carries this hurt with her throughout the book. But it's SO OBVIOUS that it's hurting him too. There is a reason why he shut things down, and I don't believe for a second that it's because he doesn't love her or want her. So, I'm pretty optimistic about that relationship. No love triangle there either.

The story is fast-paced and quite engrossing. The book is a tad bit on the long side for Young Adult literature, but I don't mind "long" books - and this one just flies by. Seriously, you'll reach page 300 and by like, wooaaahhh, I've gotten this far already?! It's about 430 pages, but it doesn't feel that long at all. Armstrong has a way with weaving a beautiful story that is interesting and complex and heartbreaking. There is a lot going, not just the search for the children. The politics, the threat of Kitsune, the shadow stalkers... the romance is by no means the central part of the story. There is too much else going on!

Moria, Ashyn, Tyrus, and Ronan set out together to find the children of Edgewood (Tyrus hires Ronan to be a guard of a sort). The group is split up multiple times, and with each time, my heart grew a little heavier. You could tell that something terrifying was going to happen in the end, and separate the group for quite some time. And it does. And my heart broke a little (a LOT).

Heartbreaking. Oh my gosh, don't even get me started. Throughout the book, I was sad for Ashyn and Ronan, because duh, you two belong together (stupid Ronan). I was happy for Tyrus and Moria, because duh, they belong together (and they know it). But then... sad things happen... and I'm SAD! The ending is cruel! Heartbreaking! Cliffhanger-y! Why, Armstrong, why?! I NEED BOOK THREE!

I'm giving this one four stars (as opposed to five stars) ONLY because of the cliffhanger ending. I hate cliffhangers, I hate waiting, and I hate feeling heartbroken! I love this book, and it's logical, the way the author ended the book, but gosh. I feel like EVERYONE was hurt in some way, physically or emotionally or mentally or something. There is so much going on! That cliffhanger though...

YES! I would totally recommend this book! And series! Oh my goodness do yourself a favor and read Sea of Shadows! And Empire of Night! Although, I can't blame anyone who might want to wait until closer to book three's release (I'm assuming there will be a book three, though I haven't seen any information about it). There is NO WAY the author can end the series the way this book ends, so I'm just going to go ahead and assume that a book three is in the works. NEED.

4.5 stars -> rounded down to 4 stars (remember, this is only because of the cliffhanger). This series definitely will be a favorite series, because fantasy! Subtle romance! Totally shipping the couples! Except... book three will tell all. Seriously, the ending of this book leaves so much to want. Please don't disappoint, Kelley Armstrong!