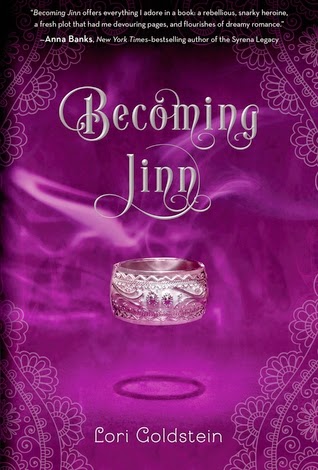 Forget everything you thought you knew about genies!

Azra has just turned sixteen, and overnight her body lengthens, her olive skin deepens, and her eyes glisten gold thanks to the brand-new silver bangle that locks around her wrist. As she always knew it would, her Jinn ancestry brings not just magical powers but the reality of a life of servitude, as her wish granting is controlled by a remote ruling class of Jinn known as the Afrit.

To the humans she lives among, she’s just the girl working at the snack bar at the beach, navigating the fryer and her first crush. But behind closed doors, she’s learning how to harness her powers and fulfill the obligations of her destiny.

Mentored by her mother and her Zar “sisters”, Azra discovers she may not be quite like the rest of her circle of female Jinn . . . and that her powers could endanger them all. As Azra uncovers the darker world of becoming Jinn, she realizes when genies and wishes are involved, there’s always a trick.

The awkward moment when a book you're really excited to read totally disappoints you. One-star disappoint. I like this author, love the publisher, but the book fell flat on its face. Or cover.

I give up with spoiler warnings. Sometimes I say "THERE MAY BE SPOILERS" and then someone tells me, but your review was spoiler-free! And then I'll think that I didn't have any spoilers (and not put a warning), and someone will say, thanks for spoiling things! So I can't win. Read at your own risk. Apologies to anyone who thinks there are spoilers. I've through this review several times and I don't see anything that I would consider a spoiler - given the story. But I've had the advantage of reading the story already. Anyway.

From the start, I didn't get a good vibe from the book. Initially, before I opened the book, I was EXCITED. Jinn-related books fascinate me. Exquisite Captive by Heather Demetrios and The Fire Wish by Amber Lough are two of my recent favorites. All jinn-related novels feature a jinn that has no control over his/her magic, a jinn that must grant wishes.

This story is no different. Azra does not want to be a jinn. She wants to be human. When jinn girls are born, they are injected with something that makes them powerless. At sixteen, they get a silver bangle which allows them to access their dormant powers. Azra turns sixteen, and is officially a jinn. She will grant wishes of candidates sent by the Afrit (the ruling jinn family class thing). Azra doesn't want to be a jinn, doesn't want to get along with her Zar sisters, doesn't want her abilities. But she finds that she has more advanced abilities than just about every jinn. And she wants to use her abilities to help her neighbor, Henry, or her boy toy, Nate.

The first thing that pissed me off was Azra's personality. There were a lot of things that bothered me, but two things really stuck out: her submissiveness, and her nasty attitude. Which seems like opposite things, right? She's submissive in that she lets her mother push her around ALL THE TIME. I get it - the Afrit are really controlling, you're supposed to bond with your Zar sisters, there are rules, blah blah blah.

But let me use the birthday party example: Azra didn't want her Zar sisters (basically, her female peers, the daughters of her mother's Zar sisters) coming to her birthday party. She's not close with them like they are with each other, and she doesn't want to be. Okay, fine. Azra's mother says okay, no inviting them. Then she goes and invites them anyway. The thing is, that s*** wouldn't fly with me, jinn or human or whatever. And I thought that it wouldn't pass Azra either, because Azra was PISSED, but then she was like okay... and was furious, but relented.

Honey. Please. If you don't want people you don't like to come over for your birthday, then they're not coming, or you're not staying. Grow a d*** backbone.

SHE LITERALLY HATES EVERYTHING. I think the author was trying to go for the whole rebellious-free-thinking-feisty-protagonist bit, but it came off as whiny-b****y-ungrateful-protagonist. I figured Azra would go through some character development, but honestly, from start to finish, I didn't really see any major changes in Azra's behavior. Still selfish, still petty, still annoying. So annoying. I hated Azra's inner (and outer) voice.

That's another thing - Azra is REALLY stupid. She does silly, impulsive things all the time, without thinking things through, without thinking of the consequences. She wants to jump right into things, without learning, without doing the heavy lifting. She wants all of the flare without all of the studying. It doesn't work that way, as she finds out. This girl is so idiotic, sixteen years old or otherwise.

Let's talk romance. Ha. There IS a love triangle in this book. Henry, the neighbor who seems to "get" her, and Nate, the lifeguard (Azra works at a food place at the beach), who is hot and dorky and did I mention hot (apparently)? Lifeguards generally look good without their shirts on. Anyway. Love triangle. Messy relationships. Blurred lines. Stupid girl. So many cliches.

It started out as if Henry was the definite love interest, but then Azra is in denial and convinces herself that they're friends (meanwhile, we all know Henry is in love with her). Azra is totally in lust with Nate, and he with her (though he also really cares about her, it seems). Azra is "with" Nate, but eventually realizes that she has feelings for Henry too. I mean, she got randomly jealous when she found Henry hooking up with a girl in his backyard. Ooookay...

Hated the protagonist. Hated the romance. Hated the love interests. Well, actually, no. I really liked Nate. Henry, I did not like. Henry finds out certain things, and Henry is a five-year-old disguised as a seventeen-year-old. I kid you not, the boy has a maturity level of a five-year-old. I'm not sure he made one good decision in this book - except those pertaining to his little sister, Lisa.

I'm not impressed with the fantasy aspect of this book. Everything seems either cliche, or irritating. For example, the Afrit forces jinn to make wishes. The Afrit use science to withhold the powers of female jinn under sixteen. The Afrit use DNA mixing (or something) to create more jinn babies - so I don't think sex or finding a mate is required, if I understand correctly. Basically, the Afrit is like a modern-day dystopia government, control reproduction, creativity, abilities, free thinking, free speech, privileges... cute, but not entirely creative, or enjoyable to read, or original. If I wanted to read a dystopia, I would. Instead, I was stuck reading this book thinking, are you kidding me?! Next thing you know, we'll be discussing uprisings and rebellions.

HINT. Ahem. Dystopia, anyone? With a hint of (poorly written) fantasy.

The story isn't that interesting. In fact, it's painful to read. Azra hates everything, and most of the story revolves around her either hating everything even more, or doing stupid things because she wants to not hate everything (but it backfires a bit). Azra thinks she's good stuff because she's got even more advanced powers than most jinn, and it makes her cocky.

There are so many YA cliches in this book. The wannabe-feisty (but NOT feisty - instead, whiny) protagonist. The silly love triangle. The "chosen one" with superior abilities. The rigid, controlling government - and therefore, the rebellion (that the "chosen one" will probably join, and eventually, lead). The "choice" represented by the love triangle - one boys knows everything, one boy knows nothing. The protagonist's heritage (can't say more than that). The ending - ha. So many annoying cliches. This book is chock full of YA cliche after YA cliche.

I mean, obviously I didn't like this one, and I can't recommend it to anyone, but I won't discourage anyone from reading it (directly, anyway. This review is an indirect non-recommendation, I suppose). Read it and make your own decision - if you were already going to read it. If you've never heard of this one or had only just heard of it - don't bother. Read one of the other two jinn-related books I mentioned earlier in the review.

1 star. Meaning no disrespect or harsh feelings to the author, publisher, etc. but... this book wasn't a good one, and wasn't for me. I doubt I'll be reading the second one - I'm just not interested in it. Cliche story? I know how it continues, and ends.