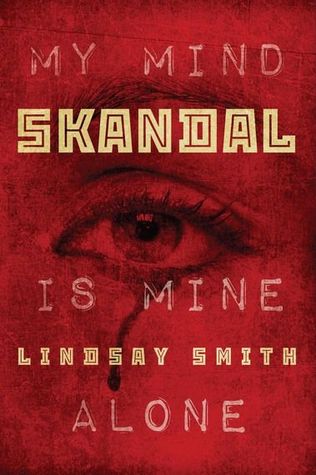 The dramatic sequel to Sekret, this psychic Cold War espionage thriller follows Yulia to Washington, DC, where she fights to discover the truth about her family without losing control of her mind.

My mind is mine alone.

Life in Washington, D.C., is not the safe haven Yulia hoped for when she risked everything to flee communist Russia. Her father is reckless and aloof, and Valentin is distant and haunted by his past. Her mother is being targeted by the CIA and the US government is suspicious of Yulia's allegiance. And when super-psychics start turning up in the US capitol, it seems that even Rostov is still a threat. Ultimately, Yulia must keep control of her own mind to save the people she loves and avoid an international Skandal.

This series is pretty interesting - different from what I'm used to reading, but interesting nonetheless. I liked Sekret, but I admit, I forgot a lot of what happened in Sekret. So I was really wary of reading this one, because I had very little context! It wasn't so bad though, reading the sequel pretty much from scratch.

In this sequel novel, Yulia is now residing in Washington, D.C. She, Valentin, and her father working with a PsyOps team, looking for Rostov's scrubbers (the super-psychics mentioned in the synopsis). Something strange is going on with the scrubbers, and it seems like Rostov is able to control the situation without even being in D.C. Meanwhile, Yulia wants to protect her mother, but it's not easy when her mother seems to be working with Rostov. Nothing is as it seems and no one is who they are. Yulia must trust and safeguard her mind if she wants to protect and help her loved ones.

This book is historical fiction, which is really cool, because it's set in the 1960s, when the Soviet Union and the Iron Curtain and the Red Scare were still super significant things. I don't read too many books set in the 1900s (not a huge fan of the century in general, sorry!), but I really like this series, in terms of the setting (time and place). I love seeing things from Yulia's mind, the mind of a Russian girl who wants to protect herself, and her family. I also really liked the paranormal aspect of this series - it's not necessarily an original idea, but I like the presence of it, in this time period, with the politics of this situation.

I like Yulia. She is smart, she works hard, she never gives up. Yulia has to push her psychic limits over and over in this book, but she never backs down. I really liked watching her struggle to command the English language - that was a small bit of authenticity that was also a bit endearing. Especially since the author did a pretty good job of keeping the anachronisms in the language to a minimum.

I liked the story, though I was bored at times (see the next section). I couldn't quite get a grasp as to where it was going, but I never stopped reading, so that's a good sign. I wanted more from the romance plot, but in the end, I liked the romance in general. No love triangle, no acts of jealousy or emotional breaking up or any of that mess that authors like to throw into sequels. Overall, the book was interesting to read, and I had to know how things would end.

My biggest problem was the boredom. As I said above, I struggled to remember very much of what happened in Sekret. I couldn't even remember Yulia's love interest's name (and I cleverly didn't say the love interest's name in my review of Sekret, lovely). More on the romance later. But I got reoriented with bits and parts of Sekret as I was reading Skandal. I just found that I wasn't really following the story. I didn't really know where the story was leading to, what the climax would involve, what the whole point was.

I feel like there wasn't enough hints, enough foreshadowing, for me. I thought there would be more on Yulia's father, because Yulia's relationship with her father is strained. I thought that Yulia's mother would be more of a villain, but that turned out to be different from what I expected. The mole situation was a bit anticlimactic, and to be honest, I almost missed that entire scene. Also, once the mole is uncovered, he/she disappears from the story altogether. And something involving Sergei - that felt anticlimactic to me too.

I wanted more from the romance. Yulia and Valentin are sweet together, but I feel like it got to the point where Valentin was asking Yulia to help him, or Yulia was thinking about helping him, and I just thought that whole situation was a turn-off. You have to know what he needs help with to understand... I just didn't really like that whole deal. I don't know if I could do it, if I were Yulia. It seemed too hard on her.

In general, I was a bit bored, and the plot wasn't very decisive and clear to me. I'm curious as to whether or not there will be a another book in this series. This one ended pretty explosively, but I could see the author adding one. I can't decide if I'd want to read it or not.

Ehhh. If you read and enjoyed Sekret, then this one is probably worth your time. If you haven't read Sekret, then I'd say maybe. No rush or anything. I can't remember what drew me to Sekret in the first place, but I don't mind that I gave these books a chance! I'd just be wary of reading another one, if there will be another book.

3 stars. Not bad, a decent sequel novel. I think I have trouble with paranormal historical novels sometimes, or maybe I just wasn't in the mood to read this one. Either way, I feel positively towards these books, but I can't say I'd be re-reading them.