Review: Trouble From the Start by Rachel Hawthorne 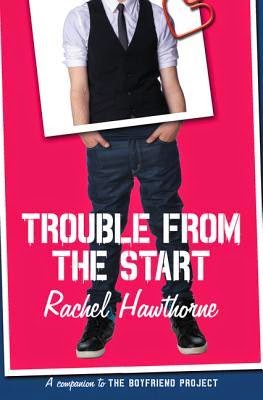 One of two companion novels from beach-read favorite Rachel Hawthorne, this cute, romantic paperback original is about a good girl who falls for a bad guy.


Avery knows better than to fall for Fletcher, the local bad boy who can’t seem to outrun his reputation. Fletcher knows he shouldn't bother with college-bound, daughter-of-a-cop Avery. But when their paths cross, neither can deny the spark. Are they willing to go against everything and let their hearts lead the way? Or are they just flirting with disaster?

Trouble from the Start releases simultaneously with companion novel The Boyfriend Project. These heartwarming paperback originals are the perfect summer reads, great for fans of Jennifer Echols, Lauren Barnholdt, and Susane Colasanti.

This book was really sweet, just what I needed at the moment. Think of this one along the lines of My Life Next Door by Huntley Fitzpatrick, or Through To You by Lauren Barnholdt. This is a YA contemporary romance novel with an extremely likable female protagonist, an intriguing but not-too-cliche male protagonist, and just enough issues and feels to make this book a great one, not overly cliche or terribly heartbreaking or anything.

Avery is third in her class (hey, like I was!), not too far behind the one and two (same here, girl!). She's a grammar nerd, a tutor, a girl who follows the rules and wants to make her parents proud (... like me. This girl and I would get along so well. WE ARE CARBON COPIES). Fletcher, on the other hand, might not graduate. He walks around with fresh bruises and a cocky, God's-gift-to-females attitude.He doesn't like commitment, and he likes "easy" girls. When Avery's cop (detective, actuall) father brings Fletcher to their home (he does that every summer, bring home troubled kids to the home, get them on their feet), Avery is shocked. But Avery and Fletcher start to get to know each other, and sparks fly. Fletcher knows he shouldn't mess with Avery, daughter of the cop who save his life, but Avery wants Fletcher, and he wants her.

As you can tell, I really liked Avery. I could easily, VERY easily relate to her. She's a nerd, very honest, very hardworking, very driven. She's third in her class, but not by much. We differ on that - she's comfortable being third (she doesn't have to do a speech at graduation), whereas I was a smidgen bitter about it (I was SO CLOSE to being number two, and number two and number one weren't that far apart either. Ugh.). She tutors in her free time, as a volunteer (as I did/do). She loves learning, and helping others, and being just plain nice. This girl is my clone.

Avery has never had a boyfriend. She's never done the deed. She doesn't drink (though, at the party in the beginning of the book, she did). She doesn't break the rules, she doesn't want to disappoint her parents. She wants a boyfriend, but she wants the right boyfriend. She's very much a one-guy girl. I have so much respect for this girl, and not just because she's like me.

I'm a sucker for good (nerd) girls and bad boys falling for each other. Mostly because that's the story of my life, but even before I went through this, I'd always liked this type of romance. There's something magical about opposites attracting. Something about two people balancing each other. One is super crazy fun, the other is super rational. They push each other - one doesn't try to fix the other, or vice versa. It's like a mutual desire to want to be better, and to push the other.

I really liked Fletcher. He's had a rough childhood, with his mother dead (at a young age), and his father an abusive drunkard. Avery's father catches Fletcher in the middle of doing something bad, and her father reaches out to him and has him stay with the family. Fletcher is a guy of few words, very closed off and unwilling to trust people. He has no problems with girls, but he's always felt something towards Avery. She's always been nice to him, and yet, she doesn't cut him any slack. She's not easy, but he doesn't see her as a challenge. He sees her as someone he cares about too much - but he's no good for her.

I love their story, romance and friendship. They're friends at first. Avery is sure that Fletcher wants nothing to do with her, and she's not in love with him from the start (no insta-love). She likes him as a person - and he likes her as a person. They're friends... until something happens, Fletcher is emotionally hurting, and they kiss. Then things get a bit awkward, but they go to pretending to be friends again. But we all know they're interested in each other, even if they're both avoiding the idea of being together, for different reasons.

The story is pretty romance-based, but there is so much else going on. This book takes place during the last week of senior year, and everyone is scrambling to take final exams, and then graduate. Fletcher is in jeopardy of not graduating. Meanwhile, Avery is tutoring others to help them pass their finals and graduate. Fletcher's father makes an appearance towards the middle of the book, and things start to pick up, outside of academics and the romance. But they're all intertwined.

This book hits on certain themes important to teenagers and young adults today. Reputation is one of them - Avery's reputation at the beginning of the story is in danger a bit, because of a rumor and a bet. Things are cleared up, but it goes to show how one small, insignificant decision could change the way people see you - whether the rumor is true or not.

This story has a great flow to it. There is no insta-love, no love triangle, no insane characters or cliches in relationships. I love Avery's best friend, Kendall. This is a great example of a healthy female friendship. And Kendall has a boyfriend, Jeremy, who is really sweet.

The story ends nicely, romance and family issues and graduation and everything. It's a bit cookie-cutter perfect in some areas, but I was so pleased that things worked out (it seemed like some issues would be permanent, but not so), so I didn't mind. This is definitely a contemporary romance novel that I could relate to, and that I enjoyed.

I can't think of anything specific to say here - I really enjoyed this book! See, I can enjoy contemporary!

I liked this book a lot, so I would recommend it! It's a sweet contemporary romance novel, not bogged down by angsty romance or cliches or terribly tough issues that make everything heartbreaking or tragic. And hey - if I liked this one, me being someone who is hit or miss with contemporary novels, then you might enjoy it too!

4 stars. I really enjoyed this book! Definitely a favorite YA contemporary romance read for the year so far. I'm not as interested in The Boyfriend Project, which is the companion to this book, and features Kendall and Jeremy (who have been together for quite some time), but I might give it a shot! This book though, this one was wonderful.