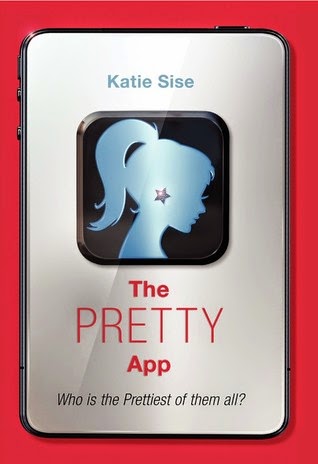 Poor Blake Dawkins! She's rich, she's gorgeous, and she's the queen bee of Harrison High. The girls want to be her; the boys want to—okay, enough said. But it turns out Blake’s life is not so perfect—just talk to her dad, who constantly reminds her that she's not up to par, or to her ex-bff, Audrey, who doesn't even look her in the eye.

Then Harrison—and every other high school in America—becomes obsessed with posting selfies on the ubiquitous Pretty App. Next: Leo, an adorable transfer student, arrives at Harrison and begins to show Blake that maybe being a queen bee doesn't mean being a queen bitch. And though Audrey suspects somebody’s playing foul, Blake finds herself catapulted to internet fame after being voted one of the prettiest girls in the country. She's whisked away to star in a reality show—in Hollywood, on live TV. But she doesn’t know who to trust. Because everybody on the show wants to win.

And nobody is there to make friends.

The Boyfriend App author Katie Sise spins another irresistible tale of technology, secrets, and big-time romance in this story of what it takes to be #trulybeautiful.

I'm actually a bit surprised that I liked this book! At first, I thought I would hate it, because it's all about looks and beauty (hence, the title), and I'm not really a fan of those types of books that feature a protagonist that is quite interested in her physical appearance. It's great to want to be as beautiful as possible, but then there's shallow (which Blake definitely is, in the beginning).

Blake was introduced in The Boyfriend App as Audrey's not-so-good-friend-anymore. We learn a lot more about Blake in this book. Blake is gorgeous, arguably the most gorgeous of all of Harrison High. Her father is a gubernatorial candidate, and wants his family spotless. Her mother is a puppet mother (classic), and Blake's sister is at Notre Dame with her own problems. Blake has always felt like her looks are the only thing going for her, and her father certainly doesn't help the case.

So, when Public introduces The Pretty App, Blake is all over that. She isn't a fan of Public, but with her father so involved with Public and publicity, she has play along. Plus, who wouldn't want the chance to be on reality TV with a number of other beautiful high school girls of the nation? Blake wants to be a TV host or anchor (or something), so she really wants the opportunity.

Enter Leo, a hot transfer to the high school. Something is definitely up with him - he's really good-looking, and he randomly transferred to Harrison? South Bend, Indiana? Totally weird. But Blake falls for him, and he falls for Blake... until something happens. But Blake and Audrey have been working on their relationship, because Leo is part of the Trogs (basically, the nerds, like Audrey). So Blake takes Audrey with her, when Blake wins a spot in the final number of girls to go to Hollywood and be on live TV. But something isn't right, and Blake and Audrey are going to figure out how to put a stop to some serious shenanigans!

I didn't like Blake at first - no surprise there, because I didn't like her in The Boyfriend App. She seemed shallow, Regina-George-esque, and downright awful. But as the story went on, we get to know more about her, and about her personality. She's definitely very negatively affected by her father's lack of praise and affection. She doesn't even like crowds or people staring at her, though she says she should be used to it. I mean, she's supposed to be a knockout, so that makes sense. Blake is definitely very self-absorbed though, don't get wrong. She does some mean things and really hurts people, but I find her a redeeming protagonist. By the end of the story, I liked her.

I definitely like how Sise worked on Blake and Audrey's friendship. It became a positive, healthy friendship, with the two girls communicating well. Audrey helped out Blake a lot throughout this book, without even really questioning things. Blake didn't always have Audrey's back, but as the story went on, it was obvious how much the girls cared about each other, and valued their friendship.

The romance was... interesting. I like Blake and Leo together. They were fireworks from the start, which is great! But there was always something off about Leo, and Audrey (and eventually, Blake) definitely thought so. The reveal of his "secret" is pretty shocking - I didn't expect that at all. I'm glad that the romance was a significant part of Blake's life, but not an overwhelming part. The Pretty App is definitely the big part of Blake's life. There is a huge gap in the book where Blake and Leo don't see or text or talk to each other. Overall, I liked the romance. It was there, but it wasn't (in the physical sense), that was fine.

I like that Sise incorporates such important themes, especially in today's society, and especially to Young Adults. Beauty is skin-deep, but feeling good about yourself is pretty important. Blake goes from being self-absorbed to more open and less selfish, and she really sees herself, by the end of the good. This is great for positive body and mind image. The universal themes in this book are pretty strong indeed!

The ending is a bit cliche and predictable, in terms of the reality show. I liked it, don't get me wrong. It was a great feel-good ending, and made everyone happy. It was just really predictable. In my opinion. But in general, I liked the ending, and I liked this book.

The Mean Girls routine definitely bothered me, and I know it will bother other people. However, Sise WANTS it to bother readers, to prove a point about Blake's (and other girls') personalities - it makes for a great comparison of Blake's character from beginning to end. But it doesn't mean I have to like it. I hate those Queen Bee mean girls who think they can do whatever they want and walk over whoever they want. Um, no.

The ending is a bit cliche. And predictable. Be aware of this.

I liked this book. It's a great contemporary read, and there are significant themes in this book that are really important to teenagers and young adults of today's society. I would recommend this book to teenagers and young adult readers especially, but to anyone in general. It's a good contemporary - not fluffy, not dark, not overburdened with romance. A nice combination of a lot of those things, definitely mixed well!

4 stars. I'm glad I decided to read this book! I almost didn't (my reading schedule is pretty ridiculous). Super relevant to today's society, and an enjoyable read all around!