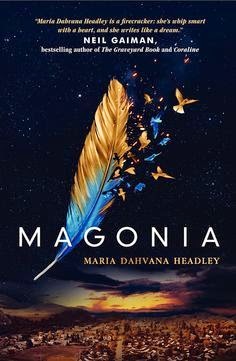 Neil Gaiman’s Stardust meets John Green’s The Fault in Our Stars in this fantasy about a girl caught between two worlds…two races…and two destinies.

Since she was a baby, Aza has suffered from a mysterious lung disease that makes it ever harder for her to breathe, to speak—to live.

So when Aza catches a glimpse of a ship in the sky, her family chalks it up to a cruel side effect of her medication. But Aza doesn’t think this is a hallucination. She can hear someone on the ship calling her name.

Only her best friend, Jason, listens. Jason, who’s always been there. Jason, for whom she might have more-than-friendly feelings. But before Aza can consider that thrilling idea, something goes terribly wrong. Aza is lost to our world—and found, by another. Magonia.

Above the clouds, in a land of trading ships, Aza is not the weak and dying thing she was. In Magonia, she can breathe for the first time. Better, she has immense power—and as she navigates her new life, she discovers that war is coming. Magonia and Earth are on the cusp of a reckoning. And in Aza’s hands lies the fate of the whole of humanity—including the boy who loves her. Where do her loyalties lie?

I think I liked this one overall. I was a bit confused at times, and I think certain parts were rushed and other parts were too slow, but then I enjoyed the writing style and the fantasy. I could see myself reading the sequel, and that's what tipped this one over to three stars, versus two stars.

Aza has a rare, unknown disease that prevents her from ever being "normal": she gets sick a lot, like she can't breathe on Earth. It's a lung disease, but no one knows anything about it. The doctors have called it "Azaray Syndrome". One day, Aza dies. That is, her human body is buried, but Aza herself finds herself on a ship in the sky, in a world called Magonia. Aza now knows what she is and where she belongs, but she lived for fifteen years with "drowners" (humans). But Aza doesn't know what to do about her newly discovered powers, and she certainly doesn't want to let go of Jason, her best friend, whom she is in love with (and he her). In the end, her decision might cost her life - and the lives of many others.

This book is written with two perspectives, Aza's and Jason's. Both are in first person. I actually really liked this dual sharing of point-of-views, because one is on Earth (Jason), and one is in Magonia (Aza). Both perspectives are definitely necessary for the development of the story. Aza's life in Magonia is obviously a huge part of the story, and Jason;s refusal to believe that Aza is dead is almost as important.

I think I like Aza. She has no clue what is going on when she wakes up on the ship in the air, and she's not afraid to let everyone know that she knows nothing. She doesn't understand everyone's expectations of her. She wants to go back to Earth, but slowly, she realizes that her place in Magonia. She meets her biological mother, the captain of the ship she's on. Zal (her biological mother) explains little, but Aza finds out that she has great power, and that someone put her on Earth as a baby, supposedly to save her from Maganwetar, the capital/government of the ships in the sky.

Things are definitely more interesting in the sky than on the Earth. Don't get me wrong, I like Jason and the second part of the story (with Aza in Magonia, supposedly dead), but I didn't absolutely love the beginning of the story. The ships in the sky are quite intriguing, as are the fantasy elements of the story.

The world-building is a strange thing. The author does a lot of showing, rather than telling. This is great, because the imagery is very rich and clear. However, it was also strange, because I didn't know how much of the world-building was given by the author, and how much of it was my imagination, in my head.

There is the ships in the sky, and there is the whole bird thing. The ships hold people that are birds - not even kidding. If my understanding is correct, the birds are like humans, and can morph into human-like beings. Aza, her mother, and Dai (the boy who is first in command) are not like most of those creatures - but they have birds in their chest (at least, Aza and Dai do. Zal's canwyr was lost long ago). This allows them to sing, and channel their power through singing. Wild, no?

No love triangle, and I hope it stays that way. There are two males in the story (I'm giving you a fair warning), but Jason is in love with Aza, and Aza is in love with Jason. Aza has a partner on the ship, her ethologidion, who is her singing partner, one whom she shares her power (and vice versa), and to whom she is bonded

The plot is a bit slow, and then at the end, things happen all at once. Which actually isn't a terrible thing, but I wish there could have been more things occurring in the middle of the book too. I liked the ending, though I saw it coming (kind of). I know there has to be at least one more book in the series, given the ending - and the Publishers' Weekly rights report confirms this! I'll be reading the sequel (most likely), when available.

This one isn't getting five or four stars, though it does seem like I liked a lot of aspects of this book. I definitely wasn't really feeling the beginning of the book. This is where Aza and her condition is introduced, and her hallucinations are made known. But they're not hallucinations, because Aza really is hearing someone call her, and there really are ships in the sky. Somehow, the beginning didn't really hold my attention, though the world-building on Earth was solid and there was a lot of great detail.

However, I can understand why people on Goodreads stopped reading after a certain part, so soon at the beginning. Because the beginning, quite frankly, was boring. I think I saw people say something about the author's writing style - personally, I like it, but I can see why people wouldn't. It kind of adds to the lull of the story. Things start to pick up a little a few days after Aza is in Magonia, on the ship with her mother and the crew.

I definitely needed more information than was given in this book. I have a feeling that the author will reveal more about the world, the capital (Maganwetar), the fight for power and rights, why Aza is SO important... but not enough was made known in this book. I was always feeling like something (some THINGS) was lacking. I hope this is rectified in the next book.

So, confusion, some boredom, a desire for more information. My dislikes are a bit vague, but they were enough to make me drop my rating of this book. I'm not really sure what I think of this book, but overall, I think I liked it.

Ehhh. If this one wasn't already on your radar, then don't go crazy and inflate your TBR list. This one was good, but not a must-read (in my opinion). I liked it, but I'm not sure I would go pushing it on other people. If you already have it, read it!

3 stars. It was okay? I think it could have easily blown me away, with the lyrical, unique writing style and really interesting fantastical world-building, but my analytic, scientific brain wanted more information! But I most likely will be reading the sequel, so that's a good sign!

USA Residents: enter to win a copy!
Posted by Alyssa at 12:00 AM