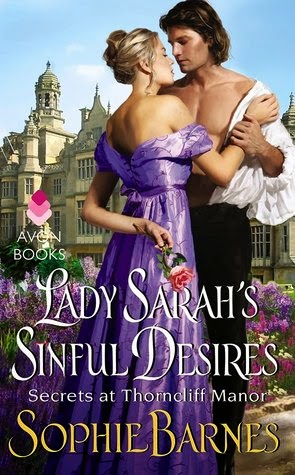 Welcome to Thorncliff Manor, where London's elite mix, mingle, and may even find their heart's desire...

There are thousands of things Christopher, Viscount Spencer, would rather do than hunt for a bride, especially since experience has taught him that women are not to be trusted. Then he finds the intriguing Lady Sarah scrambling around in Thorncliff's conservatory and he is instantly charmed by her passionate nature. But why is she so intent on avoiding him?

Lady Sarah would make the perfect bride for a peer—if not for a tarnished past that she's hiding from the ton. A stay at Thorncliff Manor was meant to help her plan for her future, not fall in love. Yet Christopher's kisses are irresistible, his gallantry enticing. When her secret stands to be revealed, will the truth ruin their dreams of happiness?

Contrary to the title, this book is not all that you think it might be. I thought there would be a lot of lust and passion and fire and sex and shenanigans in this book, and there was a dose of each... but it wasn't wild and overwhelming, like I half-expected. This is good! I found this to be a great thing! So if you were like me, and was wary of this book because of the title ("Sinful Desires", oooo), don't be turned off! And if you were hoping for example what the title promised - trust me, the author still delivered!

Lady Sarah made a terrible mistake several years ago, and her father and stepmother have not let her forget it. They bring her and her stepsisters to Thorncliff Manor, where Mr. Denison will court Sarah, thus avoiding scandal and an unwed daughter. The problem is, Sarah doesn't want to marry Mr. Denison - for one, he's older than her father. But Sarah knows what she did years ago was wrong, and that she must do as her parents ask, in order to secure a stable match and have a decent future. Christopher, Lord Spencer, is heir to the viscountcy, and has no intentions of marrying anytime soon. But he meets Sarah and is intrigued by her bold, sarcastic, feisty nature. But she's promised to another - will Christopher and Sarah act on their feelings?

I really liked this book. It reminded me of It Started With a Scandal by Julie Anne Long, and I wasn't bothered by the similarities. The protagonist went through something that she thought would work out, but didn't, leaving her with a mess, an almost-ruined reputation, and a bleak future. The protagonist does not want to grow attached to anyone, because she knows it's her duty to set things right. For Sarah, that is doing as her father and stepmother say, and marry the awful and disgusting Mr. Denison.

I like Sarah. I think it's noble of her to follow through with the courtship, despite the fact that she didn't want to do so. Of course, this is historical fiction, and it's not like she had many choices. But Sarah has every intention of doing what her parents says, because she knows the blame rests on her shoulders. Still, Sarah is very outspoken, and often says too much. But I like this about her.

Christopher does too - when they first meet, Sarah insults him intentionally and unintentionally, which is quite the feat. He's an heir, a viscount, a rich lord. He doesn't want to marry, because of his broken heart from years ago. Sarah captures his interest and cracks the stone wall around his heart. But he knows something is wrong with her situation with Mr. Denison, so he thinks to keep his distance from her... but he finds he cannot do that.

I love Christopher and Sarah together. Believe it or not, they don't even kiss until about three quarters of the way into the book. That is a looooong time, for a romance novel, especially historical romance. But this is actually a really great thing, because the slow burn romance is impeccably written. Christopher and Sarah are friends first, because they know they must be proper around each other, especially since Sarah is already in a courtship with Mr. Denison when she meets Lord Spencer (Christopher). But sparks are constantly flying between them, and it's so fun to watch them fall for each other and keep denying it - all without the physical aspect of a romance novel. But once they kiss, it's pretty much all over. Lots of physical scenes after that!

The story centers around Sarah's struggle with Mr. Denison and his courtship, her controlling, cold parents, her desire to disobey her parents, and her desire for Christopher. Sarah wants to do right by her parents, but she needs to do is forgive herself and move on. Christopher needs to forget about his long-gone lady and move on too. Together, the two of them help each other. In the end, Christopher and Sarah make a lovely couple.

The setting is quite notable; Thorncliff Manor is huge, beautiful manor, owned by an eccentric old lady who loves to do and say as she pleases. She's like an older version of Sarah. There is plenty of mystery and intrigue surrounding this manor, and plenty of budding relationships. This series has so much potential - there are sooooo many eligible ladies and gentlemen that Barnes could write about next!

While I liked the lack of physical scenes in the first three quarters of the book, I wouldn't have minded more ;)

I definitely recommend this one, especially if you're not a fan of explicit romance novels - because this one has only a few physical scenes, which is quite atypical of a historical romance novel. I loved the book, the romance, the chemistry, the story, the characters... this is probably going to be a year-end favorite. Much love!

4 stars. This new series by Sophie Barnes is very promising! I can't wait to see which characters she chooses to write about next. Richard, perhaps? That's Christopher's younger brother. Or maybe one of Christopher's sisters, with Chadwick. Gah! The possibilities!