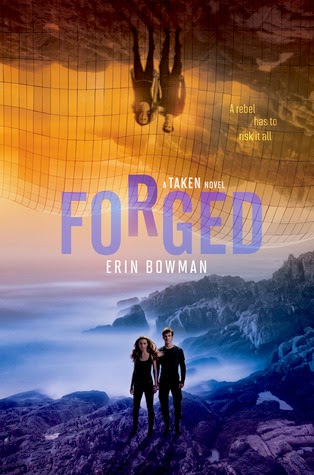 Gray Weathersby and his group of rebels must make their final stand in the epic conclusion to the Taken trilogy, which New York Times bestselling author Marie Lu called "an action-packed thrill ride from beginning to end."

The Order is building an unstoppable army, with every generation of Forgeries harder to detect and deadlier than the one before. It’s time for Gray and his fellow rebels to end the Order's world of lies. But when the most familiar faces—and even the girl he loves—can’t be trusted, Gray will have to tread carefully if he wants to succeed. Or survive.

I think, of the three novels, this one was my favorite. Taken and Frozen received the same rating as this book, but of the three-star trilogy, Forged is my favorite. While it excelled in some areas (in comparison to its predecessors), it failed in other areas (where the other two might have failed as well). Overall, I'm glad that I stuck it out and finished this series, but it definitely isn't a favorite series of all time.

Gray, Blaine, Bree, and the group of rebels must plan their every move carefully in order to take down Frank and the Order. But Forgeries are everywhere, and it's getting more difficult to tell who is true and who is Forged. This conclusion novel is rife with betrayals, torture, and heartbreak.

One thing that really worked for me in this book was the resolution of the love triangle. I stuck with this series because I liked the idea of it, and I wanted to know how it would end. I wasn't burning with curiosity, but I like finishing what I start. In this book, from the start, it is clear that Gray wants Bree and only Bree. He constantly says that he loves Emma like he loves his friends, like Sammy or Clipper. Gray spends the whole book trying to convey to Bree that his deepest regret is vacillating over whether he loves her and wants to be with her.

So, I'm glad that love triangle was cleared up. The romance was meh; on the one hand, I hated Bree's tough-girl act, in terms of the romance. On the other hand, I see her point - she wants to protect herself from being turned down or jilted by Gray again. Understandable.

Just so we're clear - I don't like Bree, never have.

There is a lot of action in this book, just as there is a lot of "dead" time. I definitely did a lot of skimming, in terms of the "dead" time, but I was really invested in the action, chunks at a time. There was this one point in the book, around page 160, when my heart stopped. And broke. And that was when I knew that, no matter how this book would end, this book would be my favorite of the series. Bowman did something extremely shocking and heartbreaking, and in the first half of the book! I totally would have expected something like that in the very end of the book. Props to her (though I'm SO SAD about that event).

I have to be honest - I couldn't remember much of the specifics of Taken and Frozen. Which is very telling of how invested I was in this series, I know. But I think this novel functioned well as a conclusion novel. The pacing was pretty consistent with the first two books (i.e. slow), and the novel addresses the big picture problem in little steps that lead to the big climax. The finish is a bit cliche, in my opinion, but whatever. It could have ended worse.

I still don't like Bree. She's too prickly and dense and standoffish and annoying and rude and brash and idiotic and did I mention annoying? I know what the author was going for - a fiery, brave, independent girl who doesn't need a guy by her side. Mostly, I found her irritating. The tough girl act got old real fast, and I just wanted to punch her. Talk about mixed signals. Talk about stupid decisions. Talk about double standards. I did not like this girl. She acts like she knows it all and everyone must listen to her when she has a FEELING, but God forbid anyone tell her she's wrong or try to do something other than what she said.

Another problem that was consistent in all three books - the snooze factor. There are so many points in this book were I was bored, and then there were a few chunks when OMG THINGS ARE HAPPENING and then things calm down to the suspicion/wondering/musing parts of the book and I was back to being bored. Like, can we ponder what we should do next while on the move to the next safe house or something? Multitask? Maybe?

I mentioned that I thought the ending was cliche - well, yeah. It wraps up pretty much how you might expect a cookie-cutter ending to wrap up. With the exception of that one surprising event on page 160-something (which is like, earlier than one half of the book), this book's ending has no big surprises. In my opinion. Maybe I saw it all coming. Maybe you all will see it coming. Maybe it's all just not that surprising.

Well, if you've read Taken and Frozen, I'm of the opinion that you might as well read the third book. But it IS a pretty satisfying conclusion novel, and you won't be utterly heartbroken or flabbergasted. Especially if you don't have the problems that I had. This series definitely isn't the worse series I've read - in fact, it's an okay one, in my opinion. It's not a favorite, but I wouldn't necessarily NOT recommend it, if that makes sense.


3 stars. It was good, but not the best thing ever. I'm glad I read this series, and I'll definitely be looking out for Bowman's books in the future. I'll be catching Vengeance Road in September for sure. I think this author is a great writer and has plenty of potential, but perhaps this series wasn't a "wow" series for me.