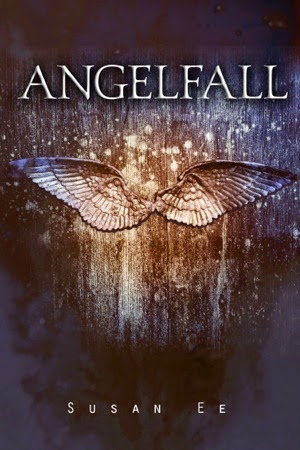 It's been six weeks since the angels of the apocalypse destroyed the world as we know it. Only pockets of humanity remain.

Savage street gangs rule the day while fear and superstition rule the night.

When angels fly away with a helpless girl, her seventeen-year-old sister Penryn will do anything to get her back...

I FINALLY caved and read this one. It's been around for years, and I've been seeing so many trusted bloggers and friends love this book (and series in general), and I never bothered to pick it up. It involves angels, I told myself. I don't like angel books. Why bother? Well, Angelfall is February's Pili-Pushed novel (I know, I'm a month late), and it appeared on NetGalley (along with World After), so I figured those must be signs. And guess what - this one is probably my favorite Pili-Pushed novel, along with Stolen Songbird (January's recommendation)!

There has been an apocalypse, and angels have destroyed the world. Six weeks after the apocalypse, Penryn, her crippled sister, and her mentally bizarre mother are setting out to hopefully find a better place to live. But this doesn't work out; a group of angels are attacking one angel, and Penryn decides to distract the angels will her mother and sister hopefully run to freedom. Penryn and the attacked angel are left by the group of angels, but one of the angels takes Paige (Penryn's sister). Penryn is determined to get her back. She takes the beaten angel and all but forces him to tell her where to find the angels. Together, Penryn and Raffe (the angel) travel to the aerie to find Paige. Raffe is going to the aerie in hopes of finding a surgeon to stitch his wings back (the group of angels sliced them off).

Right from the start, I liked Penryn. She reminds me a bit of Lela from the Guards of the Shadowlands series by Sarah Fine. Penryn is fiercely loyal, tough, and unafraid of fighting for what she wants. She's skilled in martial arts and combat - her mother had her taking lessons since she was four or five (or some young age). She's no match for angels physically but she is quite a fighter. Penryn is definitely a heroine girls should look up to. She never falls for the angels' pretty faces, never loses her resolve.

Raffe, the male protagonist, is equally as likable. He's an angel with his wings cut off, a warrior, a calculating and quiet creature. He agrees to help Penryn in order to get his wings sewed back on, but he grows to become loyal to her, and looks out for her. He is very intelligent, and very good at seeing things holistically. He is haunted by the loss of his wings, but determined to get them back.

I like the flow of this story. At first I thought, here we go, cliche story of someone trying to save someone from the bad guys. This has the Guards of the Shadowlands series written all over it. Or vice versa (I read Sarah Fine's books first, but chronologically, I think it's the opposite). Whatever. HOWEVER. I didn't find this book full of cliches at all. There are many plot twists and unexpected road bumps and turns that I did not see coming - like the Resistance camp. And when Penryn and Raffe finally get to the aerie, well, I definitely wasn't expecting any of that.

The world-building and imagery is really well-written. This is a post-apocalyptic world, and the author does an excellent job with the setting, the apocalypse, the feel of doom and gloom. And the paranormal aspect is pretty cool too. I mentioned above that I hate angel books. I've enjoyed Laini Taylor's Daughter of Smoke and Bone series, as well as Samantha Shannon's The Bone Season series, but in general, I really don't like angel-related books. So I was really wary about the angel aspect. But I'm surprised and quite pleased that I really enjoyed this paranormal aspect! The angels are harbingers of doom, and they are very pretty, but very deadly. I think I like these angels so much because they're like Taylor's angels, or Shannon's angels. As opposed to Lauren Kate's angels, or Becca Fitzpatrick's angels. Less teenage-boy-ish, more immortal, timeless, male (or female).

So, I loved the story. I loved the world-building. I love the protagonists. The supporting characters were also characters I enjoyed reading about, love them or hate them. I wasn't a fan of Penryn's mother, but that was to be expected. I didn't necessary like any at the Resistance camp - again, to be expected. I'm interested in seeing more secondary characters, because there weren't too many at the forefront (secondary characters at the forefront. Hehe). This book goes by very quickly - you won't feel the pages slipping, the percentage going by. I was never bored, and I always wanted to know what would happen next!

Okay okay, let's talk romance. There is no love triangle, no insta-love, none of that mess. In fact, the romance is barely there - which is a wonderful thing! As in, it's THERE, but it's a slow, progressive build. Penryn and Raffe don't just see each other and fall in love, or lust. It takes the whole book, nearly dying, saving each other, being separated at short intervals, etc., for them to develop feelings for each other. It's more about building trust and loyalty - but they also care about each other, and there is definitely an attraction between them. But it's all very subtle, very slow burn, very delicious to read. I can't wait to read the next book - for so many reasons, but especially the romance.

This book doesn't end on a cliffhanger, though it does end on an uneasy note. It's okay, because we know there are two books to follow, and I've waited forever to read this book, and am now completely prepared to binge-read the series. I've got World After to read next week, and End of Days comes out in May, so I am ready!

There's just one thing, and it's probably just me, but I thought the climax and ending were a tad bit too fast and perhaps a bit confusing. I was confused as to what I was supposed to be seeing, in terms of all things revealed and bad guys and the Resistance striking - it just felt like everything was thrown together at once, and it was a bit much to wade through. Perhaps I just need to reread the ending. Anyway, it's a small thing, because I certainly got the gist of everything.

YES! I totally recommend this one! I loved it a lot! I don't regret waiting so long to read it (it was almost inevitable that I would read it, with literally everyone else reading, raving about, and LOVING it). Even if you don't like angel-related novels, give this book a chance! I don't like angel content, but I really enjoyed that aspect, and this book in general.

4.5 stars -> rounded down to 4 stars (only because it doesn't quite feel like a 5-star read to me. Those are few and far between, from me). I'll be reviewing World After on Friday, March 27th (next week)!