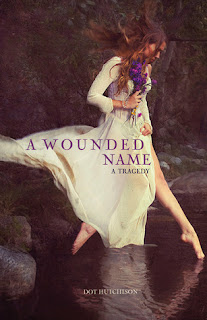 There's a girl who could throw herself head first into life and forge an unbreakable name, an identity that stands on its own without fathers or brothers or lovers who devour and shatter.

I'VE NEVER BEEN THAT GIRL.

Sixteen-year-old Ophelia Castellan will never be just another girl at Elsinore Academy. Seeing ghosts is not a skill prized in future society wives. Even when she takes her pills, the bean sidhe beckon, reminding her of a promise to her dead mother.

Now, in the wake of the Headmaster's sudden death, the whole academy is in turmoil, and Ophelia can no longer ignore the fae. Especially once she starts seeing the Headmaster's ghosts- two of them- on the school grounds.

At the center of her crumbling world is Dane, the Headmaster's grieving son. He, too, understands the power of a promise to a parent- even a dead one. To him, Ophelia is the only person not tainted by deceit and hypocrisy, a mirror of his own broken soul. And to Ophelia, Dane quickly becomes everything. Yet even as she gives more of herself to him, Dane slips away. Consumed by suspicion, rage, and madness, he spirals towards his tragic fate- dragging Ophelia, and the rest of Elsinore, with him.

YOU KNOW HOW THIS STORY ENDS.

Yet even in the face of certain death, Ophelia has a choice to make- and a promise to keep. She is not the girl others want her to be. But in Dot Hutchison's dark and sensuous debut novel, the name "Ophelia" is as deeply, painfully, tragically real as "Hamlet".

I read Hamlet in high school, as part of the English curriculum at my school. While I didn't necessarily hate it, I wasn't all that impressed with it. But I did read it, and then re-read it (to study for the test, of course). So, I was pretty familiar with the play.

This story is set in the modern world in a boarding school. The "King" is the Dean, and he is dead. The "Queen" is like, the great hostess or whatever, which is why she felt the need to marry Claudius. Claudius inherited the position of Dean, and Gertrude stayed the hostess of the school.

Basically, she let him kiss her, touch her, bruise her, drag her off on his motorcycle... to comfort him. I'm not okay with a guy hurting a girl, unstable or not, but I see why she let him. She always let him take the comfort he needed from her, in whatever form. This makes her passive, which I hate, but I understand her reasons.

Hutchison includes fae in this story. Ophelia can see them, see them dancing and singing when the Dean of the school ("King" Hamlet) died, in the graveyard, and so on. Apparently, Ophelia's (and Laertes') mother is fae? And she wants Ophelia to join the fae at the bottom of the lake. That's part of the story as well, but it wasn't in the original play.

We all know how the story ends. And by the end of the story, we're expecting the ending to happen. It's not like the Titanic, where we're all like, HOW COULD HE DIE?! The ending is expected, and fits seamlessly into the story.

If you read nothing else, READ THIS: the writing style of this book is absolutely GORGEOUS. Hutchison weaves a beautiful story with precision and perfection. There was this one line towards the end of the book, at the beginning of Chapter 38 that mentioned "Claudius dripping poison", but referring to Laertes - it was so perfectly placed, and it alluded to the poisoning of the King/Dean. I was so very impressed with the quality and brilliance of Hutchison's writing.

I already mentioned that I hate masculine violence against women. Dane bruises and hurts Ophelia - unintentionally - many times. While I think this is a necessary aspect of the story (it TOTALLY added to the story, in a good way), some people can't get past that.

One thing that really irked me was the constant switches in speech. One moment, I'm convinced that this is a historical fiction novel. The next moment, we're talking motorcycles and cars and cell phones. That confused me. I mean, Hutchison regressed women's rights (which is fine), but then, we're in the modern world. And then, one minute, all of the characters are talking all fifteenth-century formal, then they're talking modern day. I was confused! Which is it?!

I would (though I've seen otherwise). But make sure you read the "did not like" section first.

3.5 stars -> rounded up to 4 stars. I've been a huge fan of Hutchison for quite some time, and I'm happy to say that I liked her debut. Keep writing, lady!