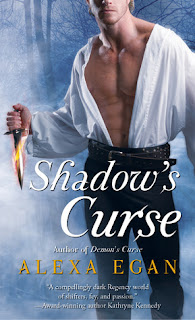 Suffering under a horrible curse and renounced by his clan, the Imnada shape-shifter, David St. Leger, stalks the London nights in the form of a large black wolf, channeling his desperate rage on thieves and murderers. But when he’s captured by the very woman he sought to rescue, he’s thrown into the magical and dangerous world of the Other—half human, half-Fey, and one of the Imnada’s ancient enemies.

Forced by her half-brother to use her gift of necromancy as a money-making scheme, Callista Hawthorne wants only to flee to her aunt in Scotland where she’ll be safe. Considering David her last hope, she offers him a deal—freedom in exchange for his protection on the long journey north.

Now in a race for their lives, Other and Imnada must put aside centuries of animosity and work together if they are to overcome the dark forces intent on stopping them before they reach safety. For Callista is far more powerful than she knows, and with her help and her love, David may finally be able to break the curse of the Imnada…

Another book in which I begin reading in the middle of the series. The wonderful thing about adult historical romance series is that most of them are companion series, not traditional series, and so I don't have to read all of the previous books to read the upcoming ones. Thankfully, this book was no different!

Unlike most of the adult historical romance novels that I usually read, this one had a paranormal aspect to it. I don't completely understand everything about it, but basically, there are men that can shift to wolves (werewolves, obviously). David, specifically, is cursed. I kind of still don't understand how he is cursed, but he is (other than the fact that he shifts in to a wolf). And he hates it. He is exiled from his clan, hunted by others, and alone.

Callista wants to run from everything. She is used by her "brother", a man that wants her only for her supernatural gifts. She is pursued by another man, who wants her for her body and her supernatural gifts. Finding David seems like the perfect solution - he'll protect her and help her escape, and she'll free him (he was captured and put in a room by her brother and fiancee).

The chemistry between Callista and David is there, right from the start. I love how their relationship progresses, because neither of them make it easy for the other. The circus caravan scenes are probably my favorite - because both of them want the same thing, but can't seem to communicate it to each other.

The romance is NOT the dominant part of this book, which was both fantastic and weird. I think it was fantastic because while I LOVE historical romance books, where the romance is just about everything, I do like to see a plot that's more than trying to get married or get rid of a suitor or something like that. This plot was definitely more, and it wove into the romance nicely.

The ending is sort of happy... a lot happens in the end. There is death and sacrifices and curses and so many things. But Callista and David get what they deserve, for themselves and for each other. I was wondering how Egan would resolve the curse issue - she did an excellent job of making that part of the ending believable and satisfying.

The plot. Remember how I said the romance was not the dominant part of the book? The plot was - meaning everything but the romance. The Imnada thing, the curse, the people after David, the suitors after Callista, the Fae, getting the castle... all of that took precedent over the romance between David and Callista.

Here's the thing: I appreciate a good plot. I love it when the author makes a romance book more than a romance book. But this book had TOO MUCH going on. The plot was definitely a weakness in this book.

I couldn't figure what David's curse was - or I don't remember. I have no idea how many people were chasing David and Callista - or who half of them were. Once David and Callista got close to the castle where Callista's aunt resides, things got weird. The author introduced some more supernatural beings, including a raven woman and a giant man, and I am really lost in all of that.

Once we got past the circus part of the book, I was confused. And hopelessly lost. There was too much going on, too many characters, too many twists and turns. It was just TOO MUCH, all at once. The pacing got wild, and names just started flying off the page. I think that's one of the reasons why I don't remember much specifically, even though it hasn't been that long since I read this book.

So, the plot was a downer. It got to be too much.

I'm on the fence with this one. While I enjoyed most of the book, I can't say I'd go around telling everyone to read it. If you liked the first one, then by all means, continue reading the series. Maybe if I had read the first book, I would have understand more about the curse and the Imnada. Who knows.

If you haven't read any of the series, then I'd pass. This one isn't a must-read.