Review: The Seduction of Lady Phoebe by Ella Quinn 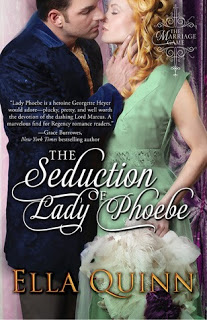 Polite society has its rules for marriage. But for Ella Quinn’s eligible bachelors, their brides will show them that rules are for the weak of heart…

Phoebe Stanhope is not a typical Lady. As feisty as she is quick witted, no one can catch her, especially astride a horse. And unlike her peers, experience has guarded her against a growing list of would-be suitors. But when she encounters Marcus Finley, what she fears most burns deep within in his blue-eyed gaze…

For Lord Finley, the spark of recognition is but a moment in the love he has held these many years. Now that he’s returned to England, all the happiness he desires rests on Lady Phoebe never finding out that he was the one who turned her heart so cold and distant. He must work fast to gain the advantage—to convince her what she wants is exactly what she denies—but in order to seduce her into his arms, he must be willing to give up more than he can control…

Much like this book. Wait - actually, this book wasn't necessarily a book I found repetitive... more like boring and bland and not unique.

Ugh. I don't even know where to start. I read this book about two weeks ago (I'm writing this review mid-August), and I can't really remember much of what I read. Usually when I love or like a book, things stick. Things did not stick from this book. I'm lucky that I remembered the protagonists' names!

My biggest problem with this book was that it was so BLAND. And uninteresting. And boring. And not unique. I'm not saying I've read a ton of books like this... because all of the historical romance novels that I've read have had something unique and memorable about them - good or bad. This book had NOTHING interesting or unique about it.

Phoebe and Marcus knew other when they were REALLY young - she was a teenager, and he was around twenty years old. One day, he mistakenly got drunk, because he was being sent away and disowned by his father. While drunk, he told Phoebe he cared about her, and accidentally touched her inappropriately. He really did have feelings for her, and he hadn't meant to grope her, but she was scandalized. She liked him too, and he acted like a no-good prick.

Fast forward to present times. Marcus has come back from his exile, since his older brother is dying, and the Finleys need a male heir. Marcus is grown up, matured, and much wiser than he was years ago. He's also more charming and handsome, but he only wants Phoebe to notice him and listen to him.

They meet, but Phoebe doesn't recognize him. Then all is revealed. Phoebe still spends time with him. They fall in love. Someone else wants Phoebe, and tries to capture her. That's the climax of the book - the attempted kidnapping. But honestly, it's so anti-climatic, I was like, UGH.

Once Phoebe finds out that Marcus is Marcus, and she still agrees to see him, things go wayyyy downhill. I was so bored! Things were all happy-go-lucky and I-love-you-but-how-do-I-forgive-you and I-want-her-but-she-doesn't-want-me and BARF. Phoebe convinces herself that she can't trust him for something he did YEARS AGO, as a youth. Seriously?! Even in historical times, what he did wasn't inexcusable, especially when he already had a reputation. And clearly, he'd grown a great deal since then. She has trust issues, and I think Marcus doesn't deserve her.

And then, I found Phoebe and her large family RIDICULOUS. I hated them ALL. All the siblings and aunts and uncles and in-laws and UGH. Everyone was so over the top, and they acted like they knew what was best for Phoebe, and it was so condescending and totally unnecessary.

And then the subplot, which eventually leads to the climax. Someone wants to steal and marry Lady Phoebe... especially since Marcus Finley has "snared" her. Okay... that's SO interesting and DEFINITELY the climax you want to draw this book to. I was like, are you kidding me?! Is this supposed to be a way for Marcus to prove he's the better man for Phoebe?! Whatever. I found the climax silly, and the subplot leading to the climax trivial.

But don't worry, because the ending was all rainbows and sunshine.

Basically, this book was bland and not the best historical romance novel. Once Phoebe and Marcus start seeing each other (really early in the book), fall in love and get engaged (middle to three-fourths of the book)... everything is just blah.

No. Skip It. There are better ones out there (Elizabeth Hoyt, people!)

2 stars. I was nice and give it one more star because I was sort of happy in the direction of the romance. Sort of.