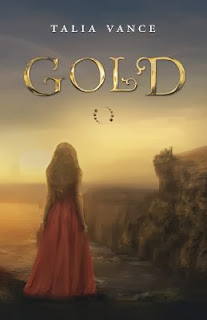 Descended from an Irish demigod, Brianna has fled to Ireland to escape destruction at the hands of her sworn enemies, the Sons of Killian. Taking refuge at the estate of her former nemesis, Austin Montgomery, Brianna discovers a rift in time that opens to an era before the feud began.

Wrestling with her newfound feelings for the more innocent Austin, Brianna begins to wonder if she can alter the past. But when Brianna and Austin learn that the Sons are raising an army of mythical beasts, the pair will need to use their magical strength in the present to avoid a tragic end.

I won Silver from Talia and A.L. Davroe last year, and I read it almost immediately upon receiving the book. I really liked the fresh concept, the Irish mythology, and the crazy characters! Brianna is a unique heroine in Young Adult literature, for better and for worse. I liked her, and I liked Blake. There is a love triangle presented in Silver, but at the end of Silver, Talia makes it clear who Brianna chooses.

Or so I thought.

It's just like Crown of Midnight. In the first book, I was all Team Dorian. The second book? Team Chaol forever and always! Gold completely changed my mind about Austin. I love Austin so much in this book, and not just as a love interest. He really developed into a solid, trustworthy character that Brianna relies on for help and support. And other things...

Brianna is in Ireland, trying to run away from the Sons of Killian, and Blake. She's pretty sure Blake hates her, and he doesn't trust her. Add on the fact that the next time she sees him, he's bonded with a different Bandia, and that's the last straw for Brianna. Blake doesn't deserve Brianna - that much is clear. You may not think Austin does either, from Silver, but in this book, some of the things that he did are explained.

Brianna finds a rift in time, at Austin's castle/mansion. She goes back in time and finds the younger Austin, from centuries back. This is how the Austin of now knew here and pursued her - because he fell in love with her back then, when she stepped through the rift in time.

Anyway. The plot and action in this book is nonstop. The beginning is a tiny bit slow, but it's balanced by Brianna's confusion about her feelings toward Blake, and Austin. The climax of the book is a final showdown kind of climax, in which everyone comes together and meets for one final battle. In a way. Read it and you'll see what I mean!

The romance is amazing in this book! Like I said before, I was rooting for Blake before. Actually, at the very beginning of Silver, I was rooting for Austin, but by the end of Silver, I was all for Blake. Throughout Gold, not once did I waver - I was all for Austin. There are some STEAMY scenes between Austin and Brianna - I was so happy to see that turn in their relationship!

There was only one big thing that I didn't like about this book... and that was the ending. Sort of. I liked the ending, but I absolutely hated it. If, by the end of the book, you're still Team Blake (How?!How could you be?!), then you won't care. If you're a convert like me, or have always been Team Austin... then prepare to have your heart broken. I'm trying not to spoil anything, but I cannot believe Talia would do that to Austin and Brianna. I knocked off a star because of that ending.

And the fact that there are no more novels to this series (this was the last one!) makes it worse. It's permanent. Unchangeable. Unbelievable. I'M SO SAD!

I would recommend this book, ESPECIALLY if you didn't like the first book. If you liked the first book, you'll read this one anyway. You must. If you weren't a fan of the first book... I have a feeling you'll like this one. It's more complex and deep and crazy and swoony!