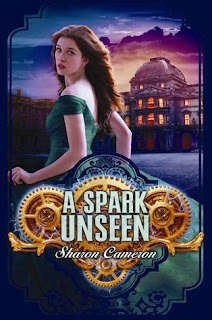 When Katharine Tulman wakes in the middle of the night and accidentally foils a kidnapping attempt on her uncle, she realizes Stranwyne Keep is no longer safe for Uncle Tully and his genius inventions. She flees to Paris, where she hopes to remain undetected and also find the mysterious and handsome Lane, who is suspected to be dead.

But the search for Lane is not easy, and Katharine soon finds herself embroiled in a labyrinth of political intrigue. And with unexpected enemies and allies at every turn, Katharine will have to figure out whom she can trust--if anyone--to protect her uncle from danger once and for all.

Lane has been gone for eighteen months, and Katharine has never stopped thinking of him. For eighteen months, she has been living with Uncle Tully and Mary and Stranwyne in fear. At the very beginning of the book, the action starts. Someone breaks into Katharine's home - more than one person. Mary whacks someone over the head - she is fierce! But anyway. After that encounter, Katharine decides to pack up Uncle Tully and her life at Stranwyne, and leave for Paris.

Keep in mind who left for France as well.

I really like how this book is set up. Two thirds of the book, we meet new characters and a new setting and a slightly different Katharine from the first book. Lane doesn't show up until the last one third of the book, and then things unravel, with his appearance. The action, mystery, and intrigue is present throughout the entire book, and it keeps the book very interesting.

You all know how much I LOVE historical fiction. I think this book was very authentic, especially the setting and dialogue. Cameron keeps the language historical accurate, but in a way that readers aren't confused or bored by the dry tone of Old English. And it is very clear to me that Cameron knows her history, and her setting, because everything seemed to come alive in this book. As was the case in this first book, but historical Paris sounds very beautiful.

So it may sounds like there is a love triangle, especially since the first book left off with Lane leaving Katharine and Stranwne, and the entrance of the lovely Henri Marchand, but it's not the case in this book. I LOVE Henri's role in this book, especially when he and Lane (and Katharine) come into the same room. Funny times, people, funny times.

The climax of this book is spectacular! I didn't know what to expect for the climax, but I really like how Cameron incorporated historical events into a fictitious story, and made Katharine and Lane a part of the bigger picture.

Katharine, in this book, is amazing. She's slightly anachronistic, because she's very strong-willed for a historical woman, but I love her spirit. The way she manhandles Lane at the end is so, so funny. And Lane... while we didn't see a lot of him in this book, I love the interactions between him and Katharine. Also, the interactions between Lane and Henri are hilarious!

All in all, I really liked this book. Actually, I LOVED this book. And the ending is so great!

Also, this is the last book in the series (it is a duology). That makes me sad because I want to read more about Lane and Katharine! I mean, the ending wraps up really nicely, but still.

4.5 stars -> rounded down to 4 stars. I hope I've convinced someone to pick up this series or this book! The series didn't start well for me (I skim-read the first book, stupidly, before actually reading the entire thing), but I love how everything passed, and concluded!