Review: Through the Zombie Glass by Gena Showalter 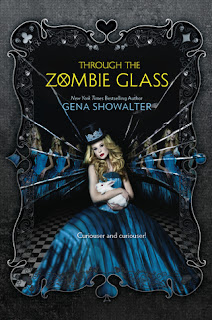 Inspired by the childhood classic Alice in Wonderland, this harrowing and romantic story features teen zombie slayer Alice Bell who has lost so much—family, friends, her home. After a strange new zombie attack, Alice fears she may be losing her mind as well. A terrible darkness blooms inside her, urging her to do wicked things. The whispers of the dead assault her ears and mirrors seem to come frighteningly to life. She’s never needed her team of zombie slayers more—including her boyfriend, Cole—than she does now. But as Cole strangely withdraws and the zombies gain new strength, Ali knows one false step may doom them all.

I'm not sure which book I liked better: Alice in Zombieland or Through the Zombie Glass. But it's safe to say that I really liked (LOVED) them both! I loved them both, but for very different reasons. This book definitely had a darker tone than the first book. Things were not as smooth for the characters. But I loved this book, with all of that!

I'll try not to spoil anything in THIS book, but I can't guarantee that I won't spoil things in the first book.

Ali is officially a zombie slayer. She's dating the "boss" of the slayer team, Cole Holland, who is hot and yummy, and sweet, and moody and bossy. She has an awesome Nana, an amazing best friend Kat. She occasionally sees her dead little sister, Emma. Life is pretty good!

Except it's not. At the end of book one, Ali took on a ton of zombie toxin. So much, that something is changing in Ali. A new presence, Zombie Ali, seems to be manifesting. And it's destroying Ali's life. Ali can't seem to control Z.A., and only with a constant injection of the antidote does Ali feel a little better.

To make matters worse, Ali shares visions with someone other than Cole - a new slayer named Gavin. The visions are ambiguous, but Cole fears that Alie and Gavin are seeing something similar to what he and Ali saw in their first glances. So, Ali and Cole's relationship deteriorates.

That's kind of the big thing in this book. Cole and Ali are not together anymore. One of Cole's exes, Veronica, shows up as well. Cole broke up with Ali, but we both know that the two of them regret that. I think Ali handles the break-up very well.

Despite the horrible crumbling relationship, I found that Ali was strong, even with the dark presence. She tried her best to be a competent slayer, but Z.A. gets in the way. The Hazmats get in the way. A spy, unknown to the group, gets in the way. Nothing is going Ali's (or the group's) way.

So, you know that the romance between Ali and Cole dissipates - in terms of the relationship, that their no longer dating. BUT, Showalter still finds ways to put them together, and all that pent-up frustration and time apart wears the two of them down - especially Cole.

I still liked Cole, despite his breaking up with Ali for basically no rational reason. I understood why, and in the end, I'm glad he learned his lesson. The end for everything - Z.A., Cole and Ali, Kat and Frosty, Reeve and Bronx - all ends pretty well. I'm not going to say that everything is resolved, but things, zombie- and relationship-related, is settled.

The drama between Veronica and Ali is so silly. I don't know why Ali stooped to Veronica's level. I can understand why Showalter put certain interactions between the two of them in the book, but I still didn't like it. If I were dealing with an ex of the boy I still loved, but was no longer with, I would ignore her shenanigans.

I would TOTALLY recommend this book, even to people that didn't like book two. For those of you that thought book one was insta-lovey, this book will change your mind. Distance makes the heart grow fonder, and in Cole and Ali's case, that is true!

4 stars. I cannot wait to read book three! I wonder what the title will be. I can't wait to see it, and read it!