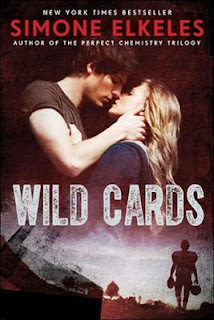 After getting kicked out of boarding school, bad boy Derek Fitzpatrick has no choice but to live with his ditzy stepmother while his military dad is deployed. Things quickly go from bad to worse when he finds out she plans to move them back to her childhood home in Illinois. Derek’s counting the days before he can be on his own, and the last thing he needs is to get involved with someone else’s family drama.

Ashtyn Parker knows one thing for certain--people you care about leave without a backward glance. A football scholarship would finally give her the chance to leave. So she pours everything into winning a state championship, until her boyfriend and star quarterback betrays them all by joining their rival team. Ashtyn needs a new game plan, but it requires trusting Derek—someone she barely knows, someone born to break the rules. Is she willing to put her heart on the line to try and win it all?

First, let me say that I have never read a book by Elkeles, so I don't know if I would like her books, or if it's just this one, or if I would probably dislike all of her books. Before (and after) I read this book, I've heard Elkeles fans say that this book wasn't her best. So, it's not just me. I still might look up some of her older books, and even read some of her upcoming ones if I get the chance.

Derek's father re-married a really young, bimbo-type woman, who is actually only a bit older than Derek himself. Derek's father is in the Navy, and so he is always away. Derek's stepmother decides to move back to Chicago, and Derek is forced to go with her. In Chicago, the stepmother's sister, Ashtyn, is the only girl who plays on the football team. She's a tomboy, rude, non-girly, and doesn't want anything to do with the yummy Derek, who actually was a football legend himself, years ago.

I loved Derek in this book. He isn't a "bad boy", though you can tell that was the angle Elkeles was trying to get. He is thoughtful and contemplative, and he fixes sheds and mows the lawn without being told to do so. Also, he does all of that shirtless. YAY for shirtless!

But seriously. He's a good guy. He's the only reason why I gave this book two stars, and not one. Well, him, and his grandmother. That lady is HILARIOUS.

Okay, but that's it.

This book really made me want to rip some hair out, or launch it to the next country. Of course, there would be no hair-ripping-out, because I LOVE my hair, and I can't launch the book anywhere, because that would involve launching my Kindle, and I NEED my Kindle.

Let's start with Ashtyn. Gosh, I hated her SO MUCH. This book is written in alternating first person - between her and Derek. So... we get her inner monologue A LOT. I enjoyed Derek's (for the most part), but not hers. She is selfish, self-absorbed, self-important, all the "self" adjectives I can think of. It is BRUTAL, reading her train of thought. Everything is about her, and her football, and her football camp, and her boyfriend, and her wanting to be with Derek BUT WAIT. She hates him. Right?

And by the way, what is UP with the football thing?! Okay, to all you feminists, I get it. Women should be able to football with me, blah blah blah. To that, I say WHATEVER. I've always watched football with MEN, and I enjoy the game with MEN. I didn't like the football aspect of the book, because Ashtyn is such a b**** off and on the field, and she makes the sport so pansy in the book.

Again, feminists. I get it. I'm a female too. But I like football... with men. Ashtyn on the men's football team? Weird.

And the football plot was dumb. Ashtyn got picked as team captain. Ashtyn was all mopey because she couldn't go to football camp, but then she could, because it just happened to be in Texas, where Derek is from, and Derek just happened to be summoned to Texas by his grandmother. Ashtyn was bullied and ignored at football camp. You think I feel sorry for her? No, I don't. I still think football - at least on a collegiate/school/professional level - should be played by men. And the football plot was silly. And trivial.

Ashtyn was also annoying because every five seconds she's like, I don't like Derek one bit. But then, she's like, I think I love him and I want him to stop flirting with my friends and other girls, and I want him to love me and care about me and stay. I want him to build his entire life around me and my football. I'm totally allowed to get mad at Derek because he didn't tell me about him being a football prodigy. IT'S TOTALLY OKAY THAT I'M SO SELFISH!

Yup, that's Ashtyn. Queen of denial and complaining and selfishness.

Derek was bad too - in terms of his inner monologue about Ashtyn. Everything was about Ashtyn, and her bossy attitude, and her hot body, and her life problems that made her so strong. WHAT PROBLEMS DOES SHE HAVE?! It's not like she was uprooted from one state to the other! She has zero "grown-up", "tough" issues to deal with AT ALL.

So... I hated the romance, but really because of Ashtyn. She's so controlling and selfish and bossy and she strings Derek along wherever she goes. She blames him when he doesn't tell her things. She gets mad at him ALL THE TIME. Seriously - the bickering NEVER STOPS. It's not even the cute, or chemistry-filled banter. It's like the I-HATE-YOU banter, but you know they are in lust (or love, I guess).

And the ending is so hunky-dory. Derek decides to stay and follow Ashtyn, as always. He starts doing something that he gave up a long time ago FOR ASHTYN. He drags his grandmother with him, FOR ASHTYN. Everything thing is for f****** Ashtyn and her "perfect" self.

Excuse me while I barf. I'm finished.