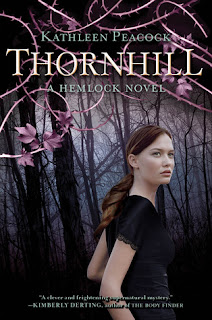 Mac can’t lose another friend. Even if he doesn't want to be found.

The ripple effect caused by Mac’s best friend Amy’s murder has driven Mac’s new love, Kyle, to leave Hemlock and disappear from her life forever. But Mac knows that Kyle plans to enroll in a rehabilitation camp, where he can live with other werewolves. She refuses to accept his decision, especially since the camps are rumored to be tortuous. So she sets out in search of Kyle with a barely sober Jason—and Amy’s all-seeing ghost—in tow.

Clues lead Mac to find Kyle in a werewolf den in Colorado—but their reunion is cut short by a Tracker raid. Now Mac and Kyle are trapped inside the electric fences of Thornhill, a camp for young werewolves. As she devises an escape plan, Mac uncovers dangerous secrets buried within the walls of Thornhill—and realizes that the risk to the people she loves is greater than ever before.

Confession time: I've had an ARC of this book since April. And I just decided to crack it open in July. Sequels are weird creations. If it's the second book of a series - particularly a trilogy - then I automatically will be afraid to read the sequel. Because often in YA, with trilogies, authors like to kill someone or take someone way or separate the protagonists, at the end of the sequel. For example: The Crown of Embers by Rae Carson, Fractured by Sarah Fine, Prodigy by Marie Lu (didn't read that one actually, but I've heard some things).

See why I am scared of sequels? Well, let me put your fears of THIS sequel to rest. This book does not end in one of the primary or secondary characters dying, or the protagonists being separated, or anything of which I was afraid. Huzzah! I can sleep at night!

Seriously though. This book was awesome. Mac leaves her home with Jason and Serena to find Kyle. All she does, all the decisions she makes, is for Kyle. When they finally meet (that's not a spoiler, you knew they would), things happen... and everyone - all the wolves and Mac included - are sent to Thornhill, a camp for werewolves.

The majority of the book is set in Thornhill. Mac and a werewolf Eve try and find a way to get themselves and Kyle and Serena out. Enter Jason, who wasn't captured and sent to Thornhill, because he was human. He comes to Thornhill as a counselor. The whole gang is in Thornhill, with seemingly no way out.

I loved that part of the book - how well Peacock wrote the camp. I was terrified of reading parts of the book that was in the camp, because it was scary! What if they got caught? What if Mac was found to be human, and just pretending to be a werewolf? What if one of them lost control, or got killed, or was taken to Willowgrove?

So many things could go wrong. And in the end, things did go wrong. And right. I can say that the ending is a good ending, a happy ending, despite everything that happened at Thornhill. This sequel did one thing that sequels should do - it took the series plot to a whole new level. Book one was about Amy's death... book two is about werewolf rights (sort of).

The romance is there, but it's not front and center. I love how Peacock makes sure readers remember that Mac and Kyle are our primary couple, and that they love each other. BUT, she also makes this book more about getting out of Thornhill than anything else. Saving each other is important... but so is getting out.

YAY for Thornhill! I really shouldn't have been so afraid of reading this book, because it's an excellent sequel - possibly one of the best sequels I've read.

The ending is a little... bittersweet. It ends well, but there is something specific about it that is sad. I don't know what Peacock has planned for the rest of the series, but I hope there is a happy ending overall! Like I said before, the ending is good... but it leaves you with a bittersweet taste in your mouth.

Or whatever that phrase is.

YES! Let's say you didn't like Hemlock: read Thornhill anyway. Liked/loved Hemlock? You're good to go! Didn't read Hemlock? Read it, and this one!

4 stars. This book did not fall victim to the sophomore/sequel slump!