Review: The Chaos of Stars by Kiersten White 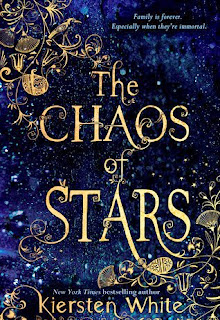 Isadora’s family is seriously screwed up.

Of course, as the human daughter of Egyptian gods, that pretty much comes with the territory. She’s also stuck with parents who barely notice her, and a house full of relatives who can’t be bothered to remember her name. After all, they are going to be around forever—and she’s a mere mortal.

Isadora’s sick of living a life where she’s only worthy of a passing glance, and when she has the chance to move to San Diego with her brother, she jumps on it. But Isadora’s quickly finding that a “normal” life comes with plenty of its own epic complications—and that there’s no such thing as a clean break when it comes to family. Much as she wants to leave her past behind, she can’t shake the ominous dreams that foretell destruction for her entire family. When it turns out there may be truth in her nightmares, Isadora has to decide whether she can abandon her divine heritage after all.

Okay, I'll admit, I had a hard time starting this one. I read about half a percent on my Kindle, and couldn't get past it. Not because it was distasteful or boring, but because I heard things about this book. I heard that the heroine was whiny. I personally HATE whiny. So I put off this book as long as possibly because while I knew I would have to read this book eventually, I didn't want to deal with the whiny.

Well, people. I have no problem admitting that I was stupid to listen to those people, and stupid for waiting so long to read this book, and stupid for thinking that a whiny heroine would make me hate this book. Because honestly, Isadora was a bit whiny at times. But I really enjoyed this entire book. I am obsessed with Egyptian mythology, so I am glad that I stuck with this book.

Isadora is getting away from her Egyptian god and goddess family - for good, she hopes. Her mother, Isis, is having another baby. But then, Isis has a baby every twenty years. But Isadora is only sixteen. Why four years early? Isadora thinks her father, Osiris, doesn't know she exists, and her mother only cares about the new baby. Isadora also found out that she isn't a goddess, and that she won't be around forever.

So, yes, Isadora is unhappy about all of that. She does whine and complain about all that. She hates her older brother Horus and his despicable wife Hathor. She doesn't like her creepy half-brother Anubis. Her aunt Nephthys seems to care about her, and Thoth, the god of wisdom, but who knows. I understand why Isadora felt invisible. No one really loved her like she wanted them to love her.

So, her mother sends her to San Diego, on the pretense of having bad dreams about Isadora's safety. Isadora lives with her brother Sirus and his wife Deena, who is very close to giving birth to her own child. Isadora is happy  in San Diego, and she eventually grows to love the museum volunteering gig her mother forced her to do.

She meets Tyler, a girl about her age, who helps at the museum. Tyler is an amazing character! I love vivaciousness. Isadora also meets Orion - or "Ry" - who Isadora immediately attempts to dislike. Isadora doesn't want to love anyone, but she slowly falls in love with Ry.

I love Ry! Not just as a love interest, but as a character with an important role in this book. As soon as Isadora goes into his house, I KNEW what was up with him and his parents. You'll read it, and you'll see. It's obvious, and very cool. Ry is cool. He's sweet and caring and understanding. He's not a "bad boy", or whatever. I really like him.

The climax of this book has to do with an old legend. Read the top part of each chapter. READ IT. It's important. The eARC doesn't really make the top part of the chapter and the actual chapter very different. But the hardcover and paperback copies might have that top part in italics. Read it - it helps you understand the climax. I had a feeling that several key characters were behind the big conflict - but one of them, I did not expect. Bravo on White's part, for building the suspense!

Character development - that is huge. One of the reasons why I took so long to read this book was because I heard people say that Isadora was whiny. I agree, she was. But this changes as the story goes on. Isadora is a very different girl by the end of the book - for the better.

No love triangle - it's just Ry and Isadora, and the progression of their relationship is beautiful to read. I was wondering how the end would work out, for the two of them, but I really like it. The end is a great end!

I did mention that I understood Isadora's whining - but to an extent. I totally understand both sides of the conflict. I get why Isadora was mad at her parents - especially her mother. But I could why Isis did things that she did. Sirus, Isadora's brother, explained things to Isadora that made sense. Isadora sees things the way an irrational teenager sees them. So, in that sense, I didn't like Isadora. Sometimes, her whining was unbearable. Other times, it takes one teenager to know one.

The climax was over pretty quickly. I mean, once Isadora figures out who and what and where, the falling action happens quickly. And then the end. Just something I noticed.

I would! I absolutely LOVE Egyptian mythology, and it was clear to me that White did her research. This book is definitely my favorite, of White's books that I have read!

4 stars. The lesson for me: if I want to read something, no matter what I hear, read it and decide for myself!