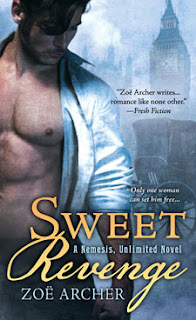 When Jack Dalton escapes from Dunmoor Prison, he has only one thing in mind—finding the nobleman who murdered his sister and making him pay. But when he reaches the inn where the Lord Rockley is rumored to be staying, three well-dressed strangers are there to meet him instead. And the pretty blonde is aiming a pistol right at his head …

Joining Nemesis, Unlimited has made Eva Warrick much more than the well-mannered lady she appears to be—one who can shoot, fight, and outsmart any man in the quest to right the injustices so often suffered by the innocent. She’s not afraid of the burly escaped convict, but she is startled by their shared attraction. She and her partners need Jack’s help to get to Rockley, but Eva finds she wants Jack for scandalous reasons all her own…

When I finished reading this book, I could not help but thinking, wow, this book was not too bad! I am not sure what I was expecting before I read the book, but I did not think that I would like this book as much as I did!

This book is not typical of what I usually read when choosing historical romance novels. Usually, I end up with the fluffy and stuffy English society ones, with lords and dukes and earls and ladies and so on. Rather than being centered around the richer class of historical English society, this book is focused on the opposite end. Neither Jack nor Eva nor the majority of Nemesis Unlimited are high-ranked nobility (one person is). I can safely say that I liked the exploration of the lower-ranked members of society!

This imbalance of power in society has a great deal to do with the plot. Jack is furious and out for revenge, because of what a certain Lord Rockley did to his sister. I definitely liked the plot of this novel, because it was so lively and action-packed. I was very impressed at how the author keeps the reader's interest on the central plot of the novel, and THEN the romance.

The romance is a significant, but not overwhelming, part of the novel. Jack and Eva are sweet and fiery at the same time. I enjoyed watching the sparks fly between them, and I loved how each character encouraged the other to embrace at part of them that makes them a better individual. And no love triangle! Yay!

3.5 stars -> rounded up to 4 stars. This book was different from the historical romance books I am used to reading, and not too bad!