Review: Lover Be Mine by Nicole Jordan 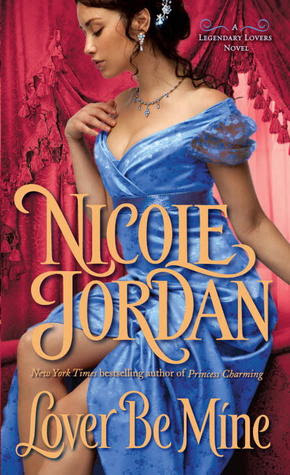 When Lord Jack Wilde's cousin tries to match him with Lady Sophie Fortin, he isn't too thrilled by the prospect since Sophie's family has long feuded with the Wildes. Nevertheless he attends a masquerade ball in disguise and when he meets Sophie, he's drawn to her. The attraction is mutual-until she learns who he is. Angry that Jack has tricked her into lowering her guard under false pretenses, Sophie declares she doesn't ever want to see him again. But then Jack shows up in unexpected places, driving her crazy with his seductive advances. She doesn't want her parents finding out that she even knows him, let alone succumbed to his passionate kisses. If her father discovers Jack courting her, blood could be shed. Yet, Sophie still wants him and realizes that in order for the star-crossed lovers to be together, they must try to somehow settle the bitter feud between their families once and for all.

The very beginning (first 25%)  and the ending are really the best parts of this book. The beginning is very strong, and clearly shows the chemistry between our protagonists. The ending is a happy ending, and readers can see that coming.

Jack and Sophie, the protagonists, are likable at times. I really liked Mrs. Pennant, Sophie's aunt. She is a significant part of the book, and helps Sophie unite with Jack more than once. She is a fabulously strong woman for such a time as this.

I'm going to be honest - as I am writing this review, it hasn't been that long since I read this book, and I can barely remember the book. That shows me that this book did not impress me enough to remember key details and plot points! Also, while I was reading this book, I was often bored. It is sad to say, but this book did not always engage my attention. And, it IS four hundred pages long (imagine that on an e-reader!). Length usually does not deter me (actually, it is the opposite - I love long books!), but the length of this book was not an impressive feature, as many parts of the book could have been done without.

I did not really like the family feud idea. I know it was supposed to mirror Romeo and Juliet, but the feud itself was silly, and pointless. Feuds generally are silly and pointless, but I really did not believe this feud could be real.

The two protagonists, Jack and Sophie, were either endearing, or they irritated me. In the first part of the book (25%-ish), I thoroughly enjoyed reading about them and their interactions. After that, it was all just a bunch of angst and woe on Jack's part, because his life is so hard, and Sophie is pushing him away because she wants to do what's right be her family. Then, it switches, and suddenly it's Sophie who is angst-ridden and woeful, because Jack turns his back on her.

But of course, all's well that ends well. This book had a good ending, if not a little (a LOT) predictable. I am satisfied with the ending.

Meh. Probably not. This definitely isn't the best example of a great historical romance novel. While I really enjoyed the first part of the novel (the first 25%, about), the rest of the novel seemed flat and not memorable.