Review: Of Silver and Beasts by Trisha Wolfe 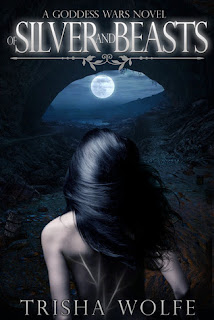 Of Silver and Beasts by Trisha Wolfe
Book One of the Goddess Wars series
Publication Date: April 19, 2013
Rating: 4 stars
Source: eARC provided by the author

I really liked this book! I expected it to be excellent, because it came highly anticipated and promoted by the book blogging community. This book is the first book written by Trisha Wolfe that I have read (shh, don't tell her!), even though I have been a huge fan of hers for quite some time. It is mostly because of her upcoming novel Fireblood. Oh my GOSH, how I want that book.

Anyway. This book was awesome! The world-building, the plot, the characters, the romance... wow! I was very surprised by how well this book was written. Not that I did not expect it to be well-written, but I was gob-smacked by the superb quality! (no offense, Ms.Wolfe!)

The world-building was so, SO good. This book is a fantasy novel, and therefore, readers must get a feel for the world and the setting and the customs from the beginning. It is not always easy for the author to do this, with dumping a ton of information on the reader all at once. Ms. Wolfe did not have this problem. I got a fantastic understanding of the world of Cavan in the beginning and throughout the novel. This is an amazing fantasy world that Ms. Wolfe has created!

The plot was all-around pretty good. Once we get to the cage fighting, not much happens, until the next big scenery jump. I liked the progression of Caben and Kaliope's relationship. That seemed to take over as the primary plot, when we as readers got to the cage fighting.

The romance was by no means overwhelming. This book was fantasy, and mythology, and then romance. I loved the romance in this book. I previously mentioned how the cage fighting part of the book is eclipsed by the romance, but it's more like they are dual plot-lines, but the romance is more prominent. I focused more on the romance than the cage fighting, because the romance was so sweet! No insta-love whatsoever. You can trust Ms. Wolfe to have her characters have a gradual progression of feelings! And yay for no love triangle! Always a plus with me.

Kaliope is an awesome protagonist. We know she will be tough and and kick-butt and loyal to the bone, but she is also sweet and caring and not always sure of herself. Her weaknesses make her strong, especially her mercury. I admire her, and I think that despite her tenacity, she is a lovely example of what I like see in Young Adult and/or New Adult fantasy books.

Caben is basically a perfect counterpart for Kaliope (if it's okay if I use the word "counterpart" without offending anyone). He is headstrong and courageous and slightly domineering but not in the overly alpha way where you just want to punch them in the face! Nah, he is great. I really, really like him. The scenes with him are my favorite - which is awesome, because he is in so many of them!

There was not too much that I did not like! A few minor things, really. I thought the pacing at the end was a bit rushed. Throughout the book, there was a slow pace, even with the action scenes. Not necessarily slow, but not quite fast either. But then the last 20% (ish) were really fast. But this was not too much of a hindrance! I just feel like while I savored the first 80%, I did not grasp the last 20% as well.

The plot is sort of slow, once we get to cage fighting. I expected this, because the majority of the book is at the cage fighting prison, but not much happens. Kaliope and Caben's relationship really develops, which is great! There are fights, some theories, but not too much. I don't know, maybe I just expected more.

The ending. Brace yourself. All does NOT end well. But there are more books in this series!

YES, totally! I absolutely LOVE fantasy (it's my favorite genre!), but I feel like I haven;t read a lot of good ones recently. This one is definitely an EXCELLENT fantasy novel. And it's a New Adult age level novel! So, you New Adult fans will love this book! It's also got a steampunk feel to it. Definitely heavy on mythology. This book is so diverse! Everyone could read it (and hopefully like it!).

4 stars. I anxiously await Of Darkness and Crowns!