Book Blitz and Giveaway: Come Back To Me by Coleen Patrick

Hi everyone! Today I have a massive blitz post for you! There is some book details, an excerpt, a guest post, and an internationally open giveaway at the end of the post! Enjoy! 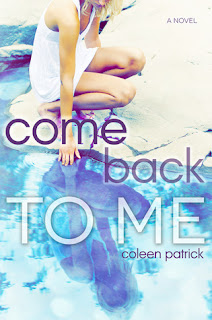 Come Back To Me by Coleen Patrick
Publication Date: March 4, 2013

She thought she had everything under control, that her future would always include her best friend Katie… Until everything changed.

Now her life in Bloom is one big morning after hangover, filled with regret, grief, and tiny pinpricks of reminders that she was once happy. A happy she ruined. A happy she can’t fix.

So, she is counting down the days until she leaves home for Colson University, cramming her summer with busywork she didn't finish her senior year, and taking on new hobbies that involve glue and glitter, and dodging anyone who reminds her of her old life.

When she runs into the stranger who drove her home on graduation night, after she’d passed out next to a ditch, she feels herself sinking again. The key to surviving the summer in Bloom is unraveling whatever good memories she can from that night.

But in searching for answers, she’ll have to ask for help and that means turning to Evan, the stranger, and Kyle, Katie’s ex-boyfriend. Suddenly, life flips again, and Whitney finds herself on not only the precipice of happy but love, too, causing her to question whether she can trust her feelings, or if she is falling into her old patterns of extremes.

As she uncovers the truth about her memories, Whitney sees that life isn't all or nothing, and that happy isn't something to wait for, that instead, happy might just be a choice. 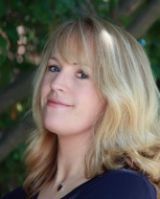 Coleen Patrick grew up in New Jersey, Virginia, Michigan, Louisiana, and Indiana. Always being the new kid, she learned that books and friends are precious—and dessert. She never met a dessert she didn't like (except for flan).

When she’s not writing, reading (or avoiding flan), she enjoys TV, arts and crafts, quoting movies, and trying to take cool photos.

She lives in Virginia with her husband and two kids.

I took a few leisurely steps toward TEA (after all, I was undercover, just call me Gucci P.I.), until I found myself in front of a large storefront window, which undercut my entire stealth factor. Not that it mattered, since the place seemed empty. I leaned toward the glass. The place had wood floors and tables, and a large counter bar in the center. From the outside, through the smudged glass, it looked cozy and warm.

No sign of Evan, though. I shielded my eyes and peered closer. There was a low stage in the back with a mic stand and a piano. Still no people. Was the place even open?

My gaze slid downward, checking for a sign that displayed the hours, and I noticed the couple. They sat at a table right next to the window, shooting me sideways glances.

I jumped back, and offered a sorry smile and wave to the couple, only to step on a shoe.

I turned to see the scowling face of a man in scrubs and a white coat—a doctor, probably heading back to the hospital two blocks down.

“Sorry, so sorry,” I mumbled, holding up my hands in surrender as I twirled away from the sidewalk traffic. I ducked into TEA.

Inside, it smelled awesome, an intoxicating combo of cinnamon, pepper, and vanilla.

That was where my original view of cozy and warm ended. Upon closer inspection, I saw scratched wood floors and tables, legs gouged with dents. The two plush but lopsided chairs in the opposite corner reminded me of the chair I used to love to read in on my grandmother’s screened in porch—if her porch had been exposed to the wind and the rain. Tired baskets crammed with books were wedged between chairs, and the piano was just a dusty, upright that appeared to be missing a couple of keys. Spanning the length of the back wall was the main counter with a glass pastry case underneath, displaying cupcakes, giant cookies with crumbly edges, and something that sort of resembled a scone.

I stared at the cupcakes. What was that color of frosting? Neon and gray, it was the first time I ever saw a cupcake that didn't look appetizing.

How was this place in business? I understood why they stuck with such an unimaginative, generic name—TEA. The smells of their obvious variety of teas was the only appealing aspect of the place. Actually, the place smelled perfect.

I closed my eyes and inhaled.

My eyes snapped open. Evan. He stood next to a tall, wooden table, with a bowl of haphazard sugar packets and a lone silver milk thermos. He stirred a paper to-go mug that had a square tea bag tag hanging over the side.

“Oh. Um, hi,” I said. I cleared my throat. After more than two hours of aimlessly riding around on a bus in silence, my words sounded rusty.

“Hi.” He smiled, effortlessly, but I caught how his eyebrows lowered ever so slightly. Was he confused? Did he know I followed him there?

“What are you doing here?” I asked, mentally cringing the moment my words fell out, because I totally sounded like I belonged at TEA, and Evan was the one stalking me.

“I was going to ask you the same question,” he said, pressing a black plastic lid onto his cup. He stepped toward me and, for a second, I thought he was going to extend his arm out for a handshake. Instead, he moved his hand to push a book deeper into his back pocket. His shirt lifted slightly, and I couldn't help but notice a hint of skin where the last button ended. Warmth crept up my neck. I didn't need to be caught stalking and checking him out. Although it was surprising to note he was actually kind of cute. I never noticed that before.

I focused on a spot near his ear. His hair was dark, neat but for a slight upward curl at the ends. After adjusting his book, he stuffed his free hand in the front pocket of his jeans. His white sleeves, rolled almost to the elbow, contrasted with the tan of his forearm.

“I've never seen you here before,” he said.

I smiled a little because it sounded like a variation of Do you come here often?

But after the smile, I had nothing. Not even the tiniest glitter speck of sparkling conversation. I couldn't lead with the night he took me home. It was beyond cringing and awkward, not your average jumping off point. But of course, my mind was blank. It wasn't like I could say something normal like TEA was my favorite place, or that I was meeting someone there.

I glanced at the couple by the window, a pot of tea between them. I imagined myself walking over to them. Remember me? We met through the window?

“Well, I like tea,” I said. It was true, even if he didn't know whether I was talking about the shop or the beverage. After all, I did like the social, civilized, even soothing aspect of tea. I used to choose it over coffee when I went to Starbucks at Bloom Town Center.

Next up? A scintillating recap of the day’s weather.

“Then you've come to the right place,” he said, but he looked unconvinced, and his gaze dropped to my outfit. “Unless you’re looking for cucumber sandwiches and high tea?”

I rolled my eyes, but I knew my silk suit clashed with the laid-back atmosphere. “I thought it was no shirt, no shoes, no service. Where does it say no Gucci?”

Evan smiled, and I felt a bit of triumph over the fact that I was actually having a conversation, one not prompted by Emily or one of Vivienne’s group games. Okay so it was still kind of pitiful, as was my reaction, but I needed to start somewhere, especially if I was going to get anywhere close to talking about that night.

I am the oldest of four siblings and there were times I let that power go to my head.

Sometimes I run errands only to notice later that I have toothpaste spatter on my shirt.

I think TV is awesome. Gilmore Girls is a favorite—I could live in Stars Hollow.

I love the smell of books. When I pull up to the drive thru at my library I inhale deeply when they slide back the window.

I broke my finger (and wore a cast for six weeks) after a battle with a spider. Obviously, the spider won.

I think mushrooms are way too chewy to eat.

I am gluten intolerant, so sometimes cupcakes and pizza seem like sparkly, shiny things. I just can’t look away.

When I was a kid, I thought it would be cool to marry Godzilla.

I've lived in the same house for the last 18 years, but before that, I moved 16 times.

After college, I turned down an interview with the ATF (Bureau of Alcohol, Tobacco, Firearms, and Explosives), and instead got a job working at a library.

- The winner chooses the format: ePub, Kindle (.mobi), or PDF

- Winner has 48 hours to respond to my email

- The mandatory entry MUST BE COMPLETED.