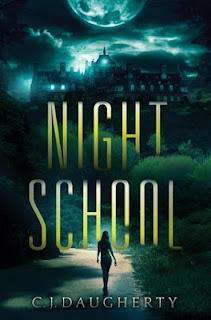 She hates her school. Her brother has run away. And she's just been arrested.

Now her parents are sending her away to a boarding school where she doesn't know a soul.

But instead of hating her new school, Allie finds she's happy there. She's making friends. And then there's Sylvain, a suave French student who openly flirts with her. And Carter, the brooding loner who seems to have her back.

Soon, though, Allie discovers Cimmeria Academy is no ordinary school. Nothing there is as it seems. And her new friends are hiding dangerous secrets.

This book was not what I expected! To be completely honest, from I heard about this book, I was totally expecting something paranormal. This book is NOT a paranormal fiction book. It's, like, mystery? Or thriller. But NOT fantasy or paranormal or science fiction.

Anyway. I really enjoyed this book! I was hooked, as soon as Allie got to Cimmeria (which was not too long into the book). The immediate beginning was a bit boring and slightly confusing, but once Allie actually leaves home and moves in at Cimmeria, things start to pick up.


Throughout the book, I was waiting and waiting for the paranormal aspect of the book to make itself appear, but readers never get any paranormal aspect (obviously, because there is none!). BUT, the mysterious scenes and events of the book did not let down. What is Gabriel doing? Why is Sylvain, the smooth French guy, so perfect and always coming to Allie's rescue?

The plot itself is good, in my opinion. The story progresses slowly, but unlike some books, I thought the slow pace was not a negative aspect of the book. It was sometimes predictable, but I liked the story nonetheless. The actual Night School part of the book is kind of cool, but the idea of it is not new. Same with the epic showdown at the end, and the motives of the villains of the story. Nothing new, but still enjoyable to read.

The romance was actually quite nice, despite the fact that there is a love triangle. Allie is not torn between Sylvain and Carter - there is an obvious choice that Allie makes. After meeting BOTH males, readers will know exactly which one Allie will "choose". Look at the characterization: one of the males is a static character, the other is dynamic. Authors often put the heroine with a hero that dynamic, like she is. Very rarely is the static, non-changing hero the true love interest.

All of that is fine by me, because in this case, the male I really liked was the one for Allie! Poor guy - he is judged too harshly. And the other guy - I knew he was a creep, from the first time readers are introduced to him.

The ending was rushed (more on that below), but good. Things are happy, and the heroine and the hero (love interest) ended up together. I liked the ending, even if things ended a little la-dee-dah.

I really only had problems with a few things, and they weren't that bad. I felt like the ending was extremely rushed. We come to the climax, and BOOM! The ending is upon us. It's almost like there is very little falling action, and the author goes straight to the denouement. This wasn't a huge thing with me, but it was something I noticed that stuck out.

This is a first person point-of-view problem, but it's also something author chooses to do. It makes me feel like the author does not want to write the rest of the big climax scene, and just shuts down the scene with the heroine going out cold.

So, not a gigantic problem, but still bothersome. Neither of the things I described detracted from my overall love for this book!

Totally! It's not fantasy or paranormal or science fiction - but fans of those genres will still LOVE this book. I think it's quite the unique read! Even if it is a little predictable.

4 stars. This is a great book! I cannot wait to read the rest of the series!