Review: A Most Devilish Rogue by Ashlyn Macnamara 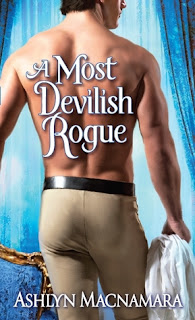 Years ago, when Isabelle Mears was still a young miss too infatuated to know better, she surrendered her innocence to a dishonorable man. Though ruined and cast out from society, she has worked hard to shelter her illegitimate son, Jack. Having sworn off men in her quiet but dignified life, Isabelle is unprepared for the deep longing that rips through her when a handsome stranger rescues her rambunctious six-year-old from the pounding ocean surf.

George Upperton is a man in trouble with debts, women, and a meddling family. He is, by all accounts, the last gentleman on earth Isabelle should be drawn to. But loneliness is a hard mistress, and caution gives way to desire . . . even though Isabelle is convinced that happiness can’t be found in the arms of such a devilish rogue. Only when Jack is kidnapped does Isabelle discover the true depth of George’s devotion—and how far a good man will go to fight for the woman whose love is all that matters.

This was pretty good, as I remember it. I didn't absolutely love it, but I didn't dislike it either. It was one of those in-between, sort-of good, not-that-memorable books that I might read, enjoy, but never remember it or pick it up again.


The characters were pretty okay. George is FANTASTIC. We get the most from him, in terms of point-of-view. We don't get too much from Isabelle, but we do get is often confusing or empty. But George. I really like him. He's not rakish, like most historical romance men are. Well, he is, sort of, but not in the typical way. I like him. I think he has more depth than most males of the historical romance genre. And he doesn't have a tragic past, which is good (not that I mind tragic pasts).

The romance is sweet. Isabelle keeps running, but George keeps following. Eventually, they get a happy ending. I liked the romance the best in this book. It wasn't instant or fast, but there was still some great chemistry and steamy scenes.

This book was just okay for me, so it's hard to pinpoint exactly what I did not like. For one, I think everything about the book moved slowly. I dislike slow plots (most of the time), and this book was no exception. I felt like more needed to happen, and when it did, it was too fast. The pacing was off - maybe that sums up that problem.

I did not really connect with Isabelle. Isabelle is our female protagonist, and yet, I really didn't care about her. I didn't get a good enough feel for her character. This is sad, since she is George's love interest!

I didn't care for the plot. It's based around the search for Isabelle's son. I was and wasn't interested in this. And then when we get to Isabelle and her family and that drama, I didn't even bother to follow all of that, because I seriously didn't care by then.

But that's okay. I didn't need to understand all of that to read/like the book.

The thing about this book is that it isn't very memorable. I can barely remember some things that happened! Usually, that stems from the fact that I was not interested, or I did not care enough about the characters, or a combination of both.

Eh, not really. This is probably one to skip. While I liked it (sort of) when I was reading it, I probably won't read it again.

3 stars. Not too bad, but not amazing either.