Review: Faking It by Cora Carmack 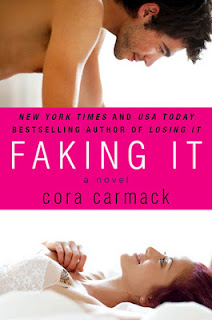 Mackenzie “Max” Miller has a problem. Her parents have arrived in town for a surprise visit, and if they see her dyed hair, tattoos, and piercings, they just might disown her. Even worse, they’re expecting to meet a nice, wholesome boyfriend, not a guy named Mace who has a neck tattoo and plays in a band. All her lies are about to come crashing down around her, but then she meets Cade.

Cade moved to Philadelphia to act and to leave his problems behind in Texas. So far though, he’s kept the problems and had very little opportunity to take the stage. When Max approaches him in a coffee shop with a crazy request to pretend to be her boyfriend, he agrees to play the part. But when Cade plays the role a little too well, they’re forced to keep the ruse going. And the more they fake the relationship, the more real it begins to feel.

Cade. Cade Cade Cade Cade CADE. I wanted to yank him out of my Kindle and give him a giant hug (and then some). I thought I liked Garrick, but GOSH, Cade is so yummy! Bliss did not deserve him anyway. Not that I don't like Bliss. But CADE. He is a class of his own.

Cade. Cade. CADE. This guy is my new favorite. He's definitely my favorite part of the book. He is sweet, caring, and thoughtful, but he is also spontaneous and brave. I love the giant leap of faith he took with Max. He decided to help out a stranger, not knowing where things would end up or how things would play out (and clearly, not the way either of them expected).

Nevertheless, I really enjoyed this book because of Cade (not ONLY because of Cade, but mostly because of Cade). He is such a good guy, and not at all the usual bad boy, rude and arrogant, dominant-type that we find in New Adult books these days.

I was not a huge fan of Max, but I did enjoy the scenes in her point of view when she did a lot of putting her foot in her mouth. Usually, the scenes occurred when Cade, Max, and Max's parents were in the same room. THOSE were the funny scenes.

The plot of this book is really slow, in my opinion. When I was reading, I noticed that I had reached the halfway mark, and only a few things had happened! This can be a good thing, for some people, but for others, like me, it was not such a good thing. More on that below!

No real love triangle, although there is an "other" guy (but who cares about him). Go Cade! The romance in this book was HOT! Prepare yourself for some steamy scenes!

And she was not good to Cade for the majority of the book. I would say that Cade deserved even better than her, but he truly likes her, so that's that. I did not like her attitude; it did not strike me as snarky or catty or whatever. While most of her attitude comes from her personality, it still seemed slightly childish to me.

YES! Totally! Such a great read, a great New Adult example, and a swoony romance. For me, Faking It did not beat Losing It, even though I LOVE Cade. Despite my dislike for the female protagonist, I really did enjoy this book, and I would recommend it to any New Adult lovers, contemporary lovers, and anyone who wants a good romance!

4 stars. I liked this book a lot!I hope everyone who read Losing It gives Faking It a chance, whether they liked Losing It or not! But who didn't like Losing It!? :D