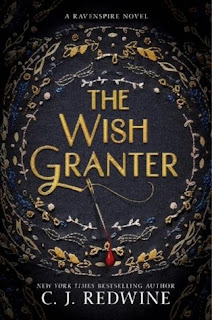 An epic fantasy inspired by the Rumpelstiltskin fairy tale, about a bastard princess who must take on an evil fae to save her brother’s soul, from the New York Times bestselling author of The Shadow Queen.

The world has turned upside down for Thad and Ari Glavan, the bastard twins of Súndraille’s king. Their mother was murdered. The royal family died mysteriously. And now Thad sits on the throne of a kingdom whose streets are suddenly overrun with violence that he can’t stop.

Growing up ignored by the nobility, Ari never wanted to be a proper princess. And when Thad suddenly starts training Ari to take his place, she realizes that her brother’s ascension to the throne wasn’t fate. It was the work of a Wish Granter named Alistair Teague, who tricked Thad into wishing away both the safety of his people and his soul in exchange for the crown.

So Ari recruits the help of Thad’s enigmatic new weapons master, Sebastian Vaughn, to teach her how to fight Teague. With secret ties to Teague’s criminal empire, Sebastian might just hold the key to discovering Alistair’s weaknesses, saving Ari’s brother—and herself.

But Teague is ruthless and more than ready to destroy anyone who dares stand in his way—and now he has his sights set on the princess. And if Ari can’t outwit him, she’ll lose Sebastian, her brother...and her soul.

C.J. Redwine has yet to disappoint me! I love her books and I am always looking forward to reading more from her. This latest novel was a delight, and it had a different feel compared to the rest of her books. It was a delightful story!

Ari and her twin brother Thad are illegitimate children of the king of Súndraille. When the queen finally gives birth to a son - the new legitimate heir - she sends bounty hunters to kill Thad and Ari. But Thad makes a wish with the Wish Granter, Alistair Teague: let him (Thad) become king of Súndraille. And so it happens, because being king has consequences. Teague is a ruthless fae that tricked Thad into being king so that he (Teague) could gain control of the kingdom, and begin to take over other kingdoms. But Ari won't sit around and let it happen - especially since she isn't under any contract of Teague. With the help of the new weapons master, Sebastian Vaughn, Ari begins to devise a plan to take down Teague. But Teague is hundreds of years old - and a fae - and he is much cleverer than any human. Sebastian and Ari must both make sacrifices in order to see the kingdom - and each other - safe.

I love how Redwine creates a world and makes it unique and wholly her own. This particular world spans across this entire Ravenpsire series. However, this book is set in the kingdom of Súndraille. In this kingdom, there is abundant crime, poverty, and drugs. The problems of this kingdom seem so modern and understandable - so like today's problems. I love how the author has the characters approaching the problems with actual solutions. How do we get rid of criminals? How do we get drugs off the streets?

Another thing that Redwine does so well is dig deep into her characters. Each one of her characters, whether primary or secondary, are so fleshed out. Ari, for example. She is the bastard daughter of the king, and she grew up like a servant. She isn't comfortable being a princess, the sister of the newly declared king. She prefers simple clothes and she doesn't mind getting her hands dirty. She is good at bargaining, baking, and numbers, and she loves having plans and lists. Ari isn't a sword-wielding kickbutt female - rather, she is insanely clever and a very talented baker.

Sebastian is quite possibly the youngest weapons master to ever exist, at eighteen. He knows how to use any and every weapon in the king's arsenal. He grew up under the care of one of Teague's most deadly collectors, and his father was cruel and hard on Sebastian. He doesn't like being touched, he hates crowds, and he doesn't say much. A man of few words, but the words he says are carefully chosen and hold a wealth of meaning. Everything about Sebastian is disciplined and precise - because he fears turning into his brutal and cold father.

This book is written in third-person limited POV, and we get chapters from Ari's POV, Sebastian's POV, and surprisingly (or not surprisingly, if you've read Redwine's novels), Teague's POV. I like third-person, and I liked the triad of perspectives from which this story is told.

It's always interesting, how Redwine gives her villains a voice in the story (i.e. a POV). Her villains aren't just evil caricatures out to kill everyone and take over the world. Redwine gives the villain a backstory and a purpose. Teague isn't a soulless Wish Granter (ha! pun intended). There are reasons for him being the way he is. Don't get me wrong, he's still a villain. But we better understand his origins, his motives, and his intent, with the elaborate backstory.

This book seemed lighter and more fun than her other books, though there were high stakes and heartbreak in this book. A key part of this book is Ari's baking - she loves food, and she loves to bake. Also, the way this book is told is almost humorous, with the writing style being so candid and almost conversational.

The story itself is indirectly split into two parts - the first half being about Thad and Ari's adjustment to being royals, and Ari getting to know Sebastian and starting to plan how to take down Teague; the second half being about them dealing directly with Teague, in which he forces Ari's hand and she signs a contract with him, and Sebastian comes up with a plan to save her. I like how the story was set up, because there was enough action and twists to keep me extremely invested.

I like the romance! It was slow and sweet, definitely there but there weren't a lot of scenes devoted solely to the romance. There wasn't a ton of physical interaction, but you could really feel how Sebastian and Ari fall for each other and develop feelings for each other. There is no doubt of their emotional connection.

I love how this book ends! It's a wonderful ending, and everything feels fairly wrapped up. Redwine ends the book a little differently from what you might expect, and I like the ending (though a part of me would have loved her to go a little further). Still, it was a great ending to a lovely book!

There wasn't anything specific that detracted from the story! I personally would have loved more Sebastian/Ari moments (you know what I mean), but their relationship wasn't a potent, chemistry-filled one. It was a sweet romance, and I can't complain (too much) about that. Again, nothing specific really took away from the story.

Personally I'd recommend any of Redwine's books, this one included. I love that her latest novels are standalone novels. As much as I liked her Defiance series, not having to wait for the book to know what happens next is really satisfying. I recommend this one if you like fantasy, fairy tale retellings, sweet romances, clever girls, and strong, silently brooding boys. (Here's looking at you, Sebastian.)

4 stars. I can always trust Redwine to write an interesting and clever story! I love how her heroines are uniquely their own - smart, yet not without faults - and her heroes the same - intelligent and strong, yet not without weaknesses. I look forward to reading the next Ravenspire novel! I'm hoping that there will be cameos from this book and book one, in the next book.