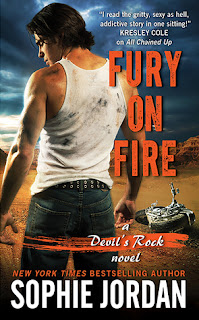 After years in prison, North Callaghan is finally free. But the demons haunting him still make him feel like a caged beast. He loses himself in work and hard living, coming up for air only to bed any willing woman to cross his path. So when his new neighbor snares his interest, he decides to add another notch to his bedpost. The only problem? Faith Walters is a white picket fence kind of girl.

Prepare to be devoured.

Faith’s new neighbor is the rudest man alive. He’d rather grunt at her than speak and he takes her “welcome-to-the-neighborhood” scones without a thank you. She knows she should run for the hills from the ex-con. If only he weren’t so smoldering sexy…if only the sounds of him with other women didn’t drift through their shared wall and fill her with longing…and if only he didn’t look at her like they were a collision waiting to happen.

I have to admit - I was really excited about this book, after finishing Hell Breaks Loose. Heck, I was excited to read it after only reading All Chained Up. I knew this third book would be about North, and I really wanted to read his story. While my favorite book of the series remains All Chained Up, I think on comes in second.

Faith is moving into her own place - finally. At twenty-six, she's either lived in school dorms (in undergrad and grad school), or at home with father. Her father is a retired sheriff and her older brother Hale is the current sheriff, and her other older brother is an Army Ranger. With these three men in her life, she hasn't had a lot of privacy, or a personal life. Living alone will allow her to have both. She doesn't anticipate her sinfully attractive neighbor, North. North has been out of Devil's Rock for several years, and he just wants to be left alone. He has one-night stand after one-night stand, and avoids his older brother Knox and wife Briar. But he can't seem to avoid his prim and proper neighbor, who gets under his skin within days of her moving in next door. As much as he'd love to stay far away from this good girl, he can't help his curiosity - and she can't help hers.

I honestly really liked the structure of this story. It's definitely a romance story and the romance is at the forefront, but it's different because the lust factor doesn't hit immediately as the story begins. Faith and North "meet" early in the book (they don't have a formal, traditional introduction), though they don't go face-to-face for at least 10% of the book. The first 10%-20% of the book focuses on Faith's newfound independence, and North's terrible loneliness, which he tries to fill with beer and sex and avoiding his brother.

I liked how this began! It wasn't instant lust or the couple having sex (or almost) within the first chapters, which is definitely different. North gets on Faith's nerves almost immediately, for constantly making a racket (well, his guest of the night), for parking his motorcycle in her half of the driveway (they share a driveway), and things like that. Faith gets on North's nerves for constantly telling him to keep it down, or move his vehicle, or things like that. The tug-of-war is huge, in the first half of the story. We've got a hate-to-love dynamic happening. But then there is also the flirtatious texting that starts, which I thought was cute. The back-and-forth texting was different too. And there is lust too, once they really start interacting. But my point - this chemistry is different. It's there on a physical level, but North and Faith get under each other's skin long before they even touch each other.

I definitely see why some readers complained about this. They don't get physical in the first 50% of the book?! What?! That's crazy! BUT it totally works for the story. Given the dynamic between North and Faith that Jordan builds, this lack of touching (in the first half) really makes sense, and fits well.

And the touching in the second half? Makes up for the lack of touching in the first half. Believe me. While I love that North and Faith get under each other's skin and irritate each other and infuriate each other and eventually trust each other, in the first half of the book... I love how they collide and crash and explode together. They are a really hot pair! I love the opposites attract dynamic of this series (bad boy, sweet and innocent girl).

I liked seeing so much depth to North. It's been years since he left prison, and he's minding his own business and being very lonely, in his house. He's a convicted felon and a murderer, and he's not hiding. He hides behind his walls (physical and emotional), and he does not let Faith in easily. He is hardened and lonely, but he's definitely an alpha and a "bad boy". The appeal is very much there.

Faith... I admire her and like her a lot. She grows up a lot in the book. She moves into her own house, faces her father and her overprotective brother Hale, especially when Hale meets North (he meets him as the next-door neighbor, not a boyfriend or something). Faith is an inherently nice person, a prim and proper, hardworking young lady. I thought she and North fit each other very well.

I have one complaint (which I'll detail in the next section). One deals with the ending, so I won't specifically say much about that here. But in general, the ending is a happily-ever-after, and a sweet one. I absolutely love the epilogue especially - at first you think it's one thing, but then it's another. I loved it but I really hope it's not the end of the series!

I really have only one complaint. Throughout the book, you can tell that Hale (Faith's older brother) is extremely overprotective and he doesn't want her anywhere North (or North anywhere near Faith). I thought it was interesting, and a little strange, that Faith's father and Hale are not a part of the "ending" (before the epilogue), in which North and Faith finally get together for real (this isn't a spoiler, we all know this is going to happen). Perhaps it's to show that Faith is completely independent and no reactions from/interactions her family is necessary, since they have to accept her decision no matter what (to be with North)? It's just a little odd because Hale's over-protectiveness is a part of this story, not a big part, but significant enough for me to have expected it to circle back at the end of the story and play a part in the climax.

So the ending was slightly underwhelming, in that sense. No drama (in terms of family) whatsoever - which is a good thing! Sort of. The family drama would have fit with the story and made sense, even if I hate the drama. If that makes sense?

I liked this series a lot. Especially All Chained Up, which is my favorite of the series. This is probably my second favorite - I loved how different this book was. This whole series "bad boys" and "good girls", and I do like this dynamic; if you do too, definitely check out at least the first book! I never thought I'd enjoy a series about ex-convicts, but hey, Jordan wrote the series well.

4 stars. I'm very satisfied with this book! I enjoyed it, even with the seriously lowered expectations and slight dread, before reading the book (some of the negative reviews deterred me a little). I'm kind of hoping that we'll get a book on Hale and Piper (Piper is a young woman in this book), but since neither are ex-cons from Devil's Rock, it's probably not going to happen. Oh well!